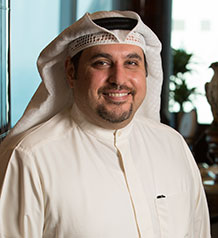 Faisal M. Sarkhou joined KAMCO’s team in 2000 and was promoted to lead KAMCO in the position of Acting CEO in June 2012 and confirmed by the Board as Chief Executive Officer in the first half of 2014, after heading the Financial Services and Investment Division at KAMCO since 2010, and the Corporate Finance Department from 2006-2010. He has extensive experience of up to 17 years in investment banking, asset management, financial products, as well as financial services. Sarkhou commenced his career in the late 1990s with KPMG Corporate Finance in Kuwait. He serves as a board member on several reputable companies and funds. He also sits on a number of company and investment management committees as well as being a board member and treasurer at the Union of Investment Companies in Kuwait and a member of the advisory board of the College of Business & Economics at the American University of Kuwait. Sarkhou is an economics graduate from the University of Birmingham, UK and holds an EMBA with distinction from HEC Paris, France.

Share on:
"The gridlock between the government and parliament is being addressed successfully."

What developments have characterized the last year for KAMCO?

A key issue for KAMCO was to maintain operational growth and profitability in a difficult operating environment. It has been a tough year for us, but we are proud to have been able to grow our core activities and maintain our profitability during a tough time. Our asset management activities in terms of portfolios and funds are beating benchmarks and growing in size. Despite losses in the markets and falling values, we have been able to raise new money and expand our products regionally, which has added more diversification to our return portfolio. We have also been cautious on the equity markets and that has helped us weather the volatility. On the investment banking side, we have been quite successful in winning announced mandates, especially on the debt side, which has helped us position KAMCO among the top regional lead managers and book runners in GCC and MENA Bonds.

Do you see an increasing role in debt markets and issuances in Kuwait, and how do you see the spread in your advisory activities?

When we look at debt markets, we see that the financial institutions are looking at strengthening their capital base. Accordingly, our investment banking team continues to lead in this space on every transaction announced in Kuwait. The time comes with a wealth of expertise and track record, managing to successfully execute over 87 transactions since inception as of March 31, 2016, valued at over $12.5 billion. We have been active and closed the first investment grade rated Tier 2 private bond in the last quarter of 2015 for NBK and during the first quarter of 2016, we acted as one of the joint lead managers (JLMs) for Burgan Bank’s KWD100 million, subordinated Tier 2, Basel III-compliant bonds. KAMCO was also one of the lead managers in Kuveyt Türk’s Tier 2 capital-boosting sukuk, $350 million issuance, and we were one of the few JLMs on it. During the second quarter, KAMCO also acted as Joint Lead Managers for Gulf Bank’s successful issuance of its first public issuance, a 10 years non-callable before 5 years, Tier 2 Basel III – compliant subordinated bond for a total of KD 100 million. We consider ourselves leaders in the debt capital markets and are involved in a number of restructurings, debt restructurings, and capital restructurings for private-sector clients. We see the debt market continuing to grow and we are also looking at possibilities with sovereigns looking at the debt market and how we can be involved with the private sector in Kuwait regionally and internationally. On the advisory side, we are looking at increased activity on the M&A side, increased activity on the advisory side, and with advisory, I am referring to considerations for privatizations and restructurings within the private sector. On the capital market side there will be a variety of activities, especially on the debt capital markets. Liquidity is available in the market; however, poor investor sentiment has reduced activity, which implies that activity and interest has gone down in capital markets. Therefore, while there is liquidity, there is also a lack of confidence and poor investor sentiment at present. The reason behind poor investor sentiment is the fear impact from low oil prices affecting future revenue growth while putting pressure on a yet oil based economy. With highly oil-dependent economies, falling revenues are expected, which has incited the government to expedite a diversification of its investment activities and structure into other areas. What will help investor sentiment is actually a push in much-needed infrastructure spending and expenditure in sectors such as in healthcare, education, housing, transportation, and logistics. In addition, there remains a strong consumer base and sector, which will help improve as sentiments go up. There are two stories there, the first being the negative impact on revenue and expense control, and the second on developing and spending in the country. Kuwait is placed in a strong position in terms of liquidity, which has been reflected by the country maintaining its high credit ratings. The negative outlook is based on the premise that we will have to see what happens with this reform and spending the government intends to undertake in clarity. In addition, we are in a transitional phase with the markets because Kuwait intends to shift the capital market from a frontier to an emerging market within the coming two years. Now, for that to be done, a national effort is needed with significant collaborative work between the public and private sector, which is already underway. That transitional phase will result in a better market, new instruments, foreign money inflows, more possibilities for listing of companies, and new instruments in the capital market with better growth and positive prospects. This transitional phase is a crucial phase given that the Kuwaiti market is an older market with now outdated systems and traditional ways of doing business, which is transitioning into a newer model at par with international standards. The Capital Markets Authority (CMA) has done a great job in changing this, even though there is more work to be done and collaborations, and we are proud to be a part of that in different capacities.

How do you approach business around the region and how do you plan to diversify out of Kuwait?

Over the last decade, we were focused on Kuwait, and since the past post-financial crisis years we have extended our product line and services further within the region, investing more into regional areas, real estate, fixed income, and equities. In addition, we obtained our license to open and operate an office in the DIFC area in Dubai, UAE. We believe that the DIFC’s solid growth and stable platform make it the ideal hub for KAMCO to access emerging markets in the Middle East, Africa and South Asia (MEASA). We are also looking at other areas in the region, currently focusing on the MENA region in particular. However, we will also venture into international markets and real estate, looking actively at real estate opportunities internationally. In addition to that, we are also about to launch an international sharia-compliant product. For example, the KAMCO Real Estate Yield Fund (KREYF) recently acquired approximately 16,500sqm of commercial real estate in the city of Riyadh, Saudi Arabia. The property consists of storage space rented by one of the leading retail companies in the region, is a key element in KREYF’s core strategy to increase revenue while achieving the best returns for investors in the fund. The Fund reached a weighted average occupancy rate of 93% and has grown in size by 195% since inception, which demonstrates the market demand for such income-generating products despite the negative sentiment and poor economic conditions. In addition to that, the Fund managed to increase its rate of return since inception to 7.4% and continues to strongly give returns above the highest deposit rates on a quarterly basis.

What are your expectations for 2017?

It will be a better year than 2016. We had a tough 2015 and a tougher 2016 than expected. Yet, we expect 2017 to be a better year as companies become more efficient and focused on their activities. As the oil sector stabilizes, investor sentiments are likely to bounce back. Moreover, when you instigate privatization, you allow the private sector to have a larger role in performing business activities more efficient and modern way. Privatization in Kuwait will need to have a consensus in regulatory framework on the governmental side. Thus, the parliament and Kuwaiti government will have to build a consensus evolving the plan for privatization and set key objectives while creating a win-win situation for society and business in general. The gridlock between the government and parliament is being addressed successfully, allowing for more efficient privatizations moving forward. The entities to be privatized have to be properly regulated and organized under fair parameters to achieve a win-win situation for all, with companies achieving profits in the long run while improving efficiency and user satisfaction.