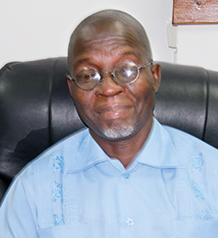 Minister, Culture and Tourism of Mozambique

Silva Dunduro, born in the Buzi district of Sofala Province, has worked in the public sector since 1987, assuming the position of Minister of Culture and Tourism in January 2015. He holds a Bachelor’s Degree in Geography Teaching from the Universidade Pedagógica in Beira, and also studied Graphic Arts at the Escola Nacional de Artes Visuais of Maputo. In 2010, he concluded his Master’s Degree in Cultural Assets and Social Projects, through a postgraduate program in history, politics, and cultural assets at the Fundaçío Getúlio Vargas in Rio de Janeiro, Brazil, as a Ford Foundation scholarship recipient. He is a co-writer of the biography of Mozambican national hero Luí­s Joaquim José Marra, and is also an exhibited painter, both within and beyond Mozambique. He is also a founding member and director of “Casa do Artista.“

Share on:
TBY talks to Silva Dunduro, Minister of Culture and Tourism of Mozambique, on expanding the remit of the Ministry, key strategies for attracting visitors, and improving air connections with the region and beyond.

Culture in Mozambique now falls under the remit of the Ministry of Tourism. How are you taking advantage of this opportunity?

Mozambique is blessed with incredibly diverse natural resources, and levels of conservation rank among the best in the region, offering the country great potential as a tourism destination.

The impressive cultural background of the country presents another element of differentiation, and when combined with the unmatched hospitality of the Mozambican people and the combination of tropical beach tourism along the country’s immense coast of approximately 2,700km, make Mozambique a unique choice. The promotion of the cultural practices and knowledge of the national communities will also be reinforced by the fusion of culture and tourism under the same ministry. Mozambique has a privileged location and a diversified climate makes the country attractive. In addition to this, borders shared with Tanzania, South Africa, Zimbabwe, Malawi, and Zambia mean that it is a well-connected nation. The diversity of touristic attractions, from beaches and conservation areas to culture and history combines to attract a broad spectrum of tourists. Good hospitality and security are also factors which make Mozambique a strong choice as a tourism destination.

What are the key strategies being implemented over the coming five years to promote the tourism industry in Mozambique?

We have to incentivize the creation of basic infrastructure to support the tourism industry, particularly airports, border control posts, roads, and energy, water, and telecommunications utilities. We will also invest in the necessary human resources, particularly in the hotel and tourism sectors, and focus on developing opportunities for young professionals and women in an attempt to stimulate local tourism. In addition, we will have to create hotel-schools to ensure the improvement of service quality and to enable the growth of the business environment. We must also incentivize the growth of air connections, an area that is still considered a serious barrier to the development of tourism on the African continent, given the limited choice of connections between regional countries. In addition, we have to enhance the financial system through an integrated platform that will enable the monitoring of foreign payments in tourism transactions. Overall, we need to do a better job of integrating the numerous contributing elements of the sector, creating better conditions for the industry to flourish and provide more jobs. Furthermore, the sector requires fuller commercialization, by promoting arts and culture as an integral part of the national touristic offering, and by instituting a tax for the promotion and development of tourism.

What is your assessment of the tourism sector’s contribution to GDP?

The performance of the tourism sector in Mozambique is measured through the analysis of the performance of key indicators such as international arrivals, revenue from international tourism, the volume of investment, and national bed capacity. Between 2010 and 2014, these indicators registered some growth as the result of the diffusion and promotion of investment opportunities and the identification of tourism zones, as well as because of concessions for gambling activities in casinos and the overall development of the business environment and the national tourism offering. In order for us to be able to understand the tourism sector’s real contribution to the country’s GDP, the “tourism satellite account” was created by the World Tourism Organization (UNWTO) to measure the real contribution of tourism to GDP. Mozambique has had an experimental satellite account since 2013, and we expect to have a definitive one in place by 2016. We are working in collaboration with the National Statistics Institute to achieve this objective. We estimate the contribution of tourism to GDP at around 5.6%. Our National Accounts only take the revenue generated by hotels and restaurants into consideration when assessing the sector’s contribution to the economy.

How would you describe the potential of MICE tourism in the country?

Any country’s visibility lies in its culture and in the efforts of the government to promote it. Mozambique remains an unexplored market, but nevertheless real estate for the tourism sector is being developed effectively, and a five-star development is currently under construction adjacent to the Joaquim Chissano International Conference Center, along with several facilities with considerable capacity. There is also a five-star hotel in central Beira called the Golden Peacock, while we should also mention developments in Tete and Cabo Delgado at Pemba Beach.

How would you describe the significance of the touristic sector as a catalyst for employment creation and socioeconomic growth?

The government of Mozambique has defined tourism as one of the strategic sectors that will contribute to socio-economic development. The sector requires the utilization of skilled and un-skilled labor, representing an excellent opportunity for the rapid creation of numerous direct and indirect positions, subsequently contributing to poverty alleviation and increased wealth.

What is your strategy for collaboration with Ministry of Transport and Communication to increase the number of locally operating airlines?

The connectivity issue not only affects Mozambique, but is also felt by other countries, particularly in Sub-Saharan Africa. The improvement of air connections is reliant on political stability, air safety, available airport infrastructure, and governmental reforms related to taxation and airline standards. The sovereignty of our national airspace is also an issue to be considered. Public-private partnerships will play a crucial role in the development of this area.