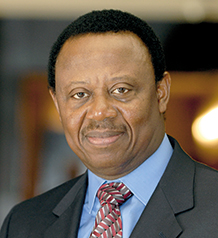 Prepare for the Influx

Chief Tunde J. Afolabi is the Chairman/CEO of Amni International Petroleum Development Company. He earned his first degree in Geology from Franklin & Marshal College, Lancaster, Pennsylvania and a Masters in Geology at Tulane University, New Orleans, Louisiana, between 1973 and 1975. Chief Afolabi is also a product of the prestigious Lagos Business School, Lagos, Nigeria. He worked with Texaco Inc., New Orleans, US from 1974 up to 1978 as a Senior Geologist, before proceeding in 1979 to join William, Fenix & Scission, US as an engineering geologist. He also worked briefly with Mobil (US) Inc. as a project geologist before he incorporated Exploration Consultants Inc. in 1983. In 1993, Chief Afolabi incorporated Amni International Petroleum Development Company Ltd, where he was the founding Managing Director/CEO.

Share on:
"We have had a decline of production, which is why we are drilling additional wells to increase or at least plateau our production."

Everyone’s talking about low oil prices. Instead of seeing it as a drawback, how can investors like you take advantage of the environment?

Just as the oil prices have gone down, so have the costs, at least the negotiated costs of services. What used to cost $100,000 a day has gone down to about $60,000 a day; therefore, you get more done for the same amount of money than you did say a year and a half ago when oil was $110 a barrel. That means that you can put more wells in the field to get more oil out. Equally important is that the value of assets is lower, meaning this is the best time to buy assets if you have the capital. Prices are expected to rebound, so if you bought an asset six weeks or two months ago, you have gained almost 20% value on that asset. The companies that will survive will know how to rationalize, cut costs, and become more efficient.

The government is working on a new petroleum regulatory framework. How do you expect that regulation to influence the future of the sector?

I’m hoping that their new approach to handling the PIB will be more successful. If it is more successful, then we will see a huge influx of capital investments in the industry. If the government establishes a more user friendly fiscal regime, then the IOCs and other investors will be eager to come in and take on new blocks, conduct new seismic studies, and discover more oil. If the government has a better approach than the one that was applied in the past, we are going to see a real turnaround in the influx of investments in the oil and gas industry.

How has your production of crude oil and gas evolved since we talked last year?

On the barrel equivalent we have more gas than oil. We have had a decline of production, which is why we are drilling additional wells to increase or at least plateau our production. We also have a new asset, OML52, which we are going to start developing once we are able to come to an agreement for the operation. By the end of 2017, it will produce about 20,000bpd. But more important for us is the gas. We have more than 3 TCF of gas and are looking more aggressively at LNG. The irony is that you actually have a healthy gas market along the West African corridor. Ghana’s requirement is almost 3 million tons of LNG/annum and we have not even explored other countries along the West African corridor. Beyond that, you have the Indian market, which is aggressively building its infrastructure. It is talking about adding another 20 million tons of LNG into its system by 2020. We are trying to see whether we can get into the market to supply them with LNG. We are aggressively seeking ways to monetize our gas, and of course the easiest was seems to be the LNG. Right now, in the Gulf Coast, LNG is selling for maybe $3 or $4 per ton or even less; the market is saturated right now. However, we are hoping that as the world economy expands, the demand for energy will grow. The East African corridor could probably service most of the Asian market but India is right around the corner for us. Even within Nigeria, we have a large market, particularly the power sector. If we can create the demand we would not have to export at all.

How have your operations in Ghana evolved since you acquired the Central Tano offshore block in 2014?

Oil and gas exploration has a long gestation period, particularly in the deep water. We are in the exploration phase still, and unfortunately 80% of our block is in the area under discussion in the Cote D’Ivoire and Ghana boundary dispute. We hope that is resolved soon so that we can push ahead with our exploration commitments.

Do you see more women participating in the oil and gas sector in Nigeria?

In the schools you already see more women than men. We are seeing more and more women working for IOCs; however, within the indigenous companies there may be a couple of women, which is not as impressive as we would like.

In your opinion, what should the government do to further support the industry?

Passing the PIB is the most important issue. Secondly, it should make more affordable assets available to indigenous companies. Mega billion-dollar blocks can only be acquired by few. It needs to open to the public assets that can increase production by 10,000bpd, not 200,000bpd. We need to grow at a sustainable pace. There are a lot of marginal, small fields out there. If the government does not make them available we cannot get our hands on additional assets to develop or grow as companies.

We are very bullish on what we are doing. Within the next three months, we will put together almost $500 million in loans to develop our existing assets. We will probably be looking at close to a billion dollars in the next two years for growing the gas projects. In 2016, we think the oil price will stabilize and we feel things will definitely get better for the industry. I’m hoping that the OPEC will get their act together.