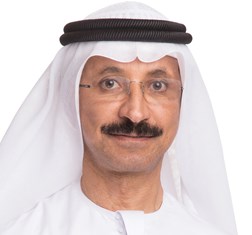 With career spanning three decades, Sultan Ahmed bin Sulayem brings a wealth of leadership experience to the boardroom. Previously as Chairman of Dubai World, he established and led diverse businesses, including Nakheel and Istithmar World. He oversaw the rapid development of the Jebel Ali Free Zone into a business park of more than 7,000 companies. As Chairman of DP World, he has been at the forefront of the company’s international expansion. He holds a bachelor’s degree in economics from Temple University. He is a board member of the Dubai Executive Council and Dubai Economic Council, as well as a Non-Executive Director of Asteco LLC, Noor Bank, and Hyperloop One.

What do you identify to be the key drivers that will boost maritime trade in Dubai in the coming years?

Economic diversification in line with the Dubai Plan 2021 and preparation for Expo 2020 will be major drivers. Dubai’s 2018 general budget unveiled an AED56.6-billion yearly budget with a focus on infrastructure projects led by Expo 2020 and social development programs to create more than 3,100 jobs. The budget also features a rise in infrastructure spending, which makes up 21% of total government expenditure. Construction material, electronics, new tech, and goods for the growth of industry sectors will come through our flagship Jebel Ali Port. Maritime trade will continue to be fueled by such growth plans in the coming years.

What new and innovative technology is being adopted in Dubai’s ports to ease trade flows?

Technologies such as drones for maintenance and security, blockchain, artificial intelligence (AI), big data, robotics, and driverless vehicles will all contribute to making supply chains faster and more productive. Dubai Trade’s one-stop electronic trade portal is another example that offers integrated electronic services from trade and logistics service providers in Dubai under a single window, including the online services of DP World and Dubai Customs.

To what extent to do you agree with the argument that due to the uncertainty in the global market conditions, volumes are decreasing and demand is shifting away from Dubai?

Drewry has in fact upgraded its demand forecast for 2018 to 4.3%, while the creation of bigger alliances and increase in M&A activity have boosted the bottom line for most lines. Improvements in the way we manage our capacities owing to tech innovation has maximized our trade potential. Our flagship Jebel Ali Port has been performing better each year, so we have not witnessed a shift away from Dubai—if anything, we have seen it improve. Globally, we handled 70.1 million TEUs across our global portfolio of container terminals in 2017, with gross container volumes growing by 10.1% YoY, above Drewry Maritime’s global container throughput growth estimate of 6.0% for 2017. Overall, the UAE handled 15.4 million TEUs in 2017, a YoY increase of 4%.

How is cruise tourism incentivized in Dubai, and what is DP World’s role in its development?

Dubai has a vision to attract 20 million tourists a year by 2020, and the Department of Tourism & Commerce Marketing (DTCM) anticipates cruise tourist numbers to reach 1 million by that time. Aligned with this vision, we inaugurated the Hamdan bin Mohammed Cruise Terminal in January 2017, an ultra-modern third cruise terminal in Dubai, which is the world’s largest single, covered cruise facility. The new building increased the handling capacity from 2 million tourists to 7 million. Mina Rashid can now serve up to seven cruise vessels at one time and more than 25,000 passengers in its three cruise terminals. It has also made Dubai a base for cruise tours visiting other ports in the UAE and the Gulf, and beyond. In November 2017, we also inaugurated the Marinas at the Mina Rashid Marina, a new world-class maritime and entertainment attraction that will accommodate 20,000 yachts and boats in the next few years. Carried out by P&O, DP World’s maritime solutions arm, the Marina stretches across 13sqkm and features a number of facilities including an integrated entertainment city, Marina Cube. Dubai welcomed more than 625,000 cruise tourists via a total of 157 ship calls during the last cruise season compared to 133 ship calls in the 2015-2016 season, reflecting a 15% increase.

What are DP World’s expansion plans for 2018?

As a global trade enabler, we will grow complementary sectors in the global supply chain such as industrial parks, free zones, and logistics. Successfully setting up these new streams across our portfolio and in new locations around the world will be a major focus. We will continue to assess new opportunities.