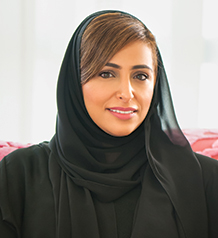 As the Chairperson of Shurooq, HE Sheikha Bodour bint Sultan Al Qasimi has demonstrated consistent efforts to link international investors with opportunities in Sharjah and position the Emirate as an attractive investment destination, in line with Shurooq’s commitment to ensuring Sharjah’s long-term sustainable growth. She is the founder and CEO of Kalimat Group, Patron of the UAE Board on Books for Young People, former President and Founder of the Emirates Publishers Association, and Director of Knowledge Without Borders. She holds a BA (Hons) from Cambridge, and a Master’s in Medical Anthropology from the University College, London. She has successfully completed publishing courses at Yale and Columbia.

Share on:
TBY talks to HE Sheikha Bodour bint Sultan Al Qasimi, Chairperson of Sharjah Investment and Development Authority (Shurooq), on Sharjah's diversified economy and shrewd fiscal policies that have contributed to the Emirate's growth and stability throughout the global financial crisis.

What are Sharjah’s particular strengths as a destination for foreign investment?

Sharjah is the industrial center, cultural capital, and education hotspot of the UAE. Its diversified economy and carefully considered approach to investment and development have guided the Emirate through challenging economic times and laid the foundations for future growth. Sharjah’s economic resilience is further fueled by more than 45,000 strong SMEs that benefit from the competitiveness of the Emirate’s supply chain. Entrepreneurs and family businesses in manufacturing, real estate, business services, and trading play an integral role in the flow of commerce, both domestically and regionally. Sharjah’s three deep-water ports also provide vital access to the Indian Ocean and the Arabian Gulf. Port Khalid, Hamriyah Port, and Khorfakkan Port have a combined capacity of 2.4 million containers and are fully equipped to handle a wide range of vessels, from break-bulk to containers.

The creation of free zones such as the Hamriyah Free Zone and Sharjah Airport Free zone have further encouraged full ownership of the companies. With a GDP of $30.76 billion generated in 2014, Sharjah is one of the leading industrial powers in the UAE, providing a solid base with flexible ports that are ideally positioned within the Emirates. The rules and regulations around investment are transparent and clear, protecting both sides equally, and giving confidence to investors. Another important factor is the reputation and resilience of banks in Sharjah. Despite the severity of the global financial crisis in recent years, Sharjah prospered where so many other cities around the world struggled. This is due to the fiscal policies that have been put in place, the stability of lending, and the strength of balance sheets. The international credit rating agency Moody’s, for example, recently reaffirmed Sharjah’s A3 long-term credit rating with a stable outlook due to the Emirate’s strong fiscal and government debt position, diversified economic structure with a competitive manufacturing sector, and the government’s focus on education.

How is Shurooq driving the socio-economic development and growth of Sharjah, while at the same time retaining the Emirate’s heritage?

Under the patronage of HH Sheikh Dr. Sultan bin Muhammad Al Qasimi, Member of the Supreme Council and Ruler of Sharjah, Sharjah’s cultural scene has flourished since its designation as UNESCO’s “Cultural Capital of the Arab World” in 1998. Later named the Capital of Arab Tourism 2015, Sharjah is home to nearly a quarter of all the UAE’s museums, and to seminal international and regional events such as the Sharjah Biennial and the Sharjah International Book Fair. Sharjah is proud of its roots and heritage, and at the same time embraces all races and beliefs, with expatriates from more than 190 nationalities working and living here. We have also made many contributions in countries such as Egypt and Morocco, which is part of our socio-economic growth and development.

Which projects and initiatives are expected to have the most significance for Sharjah’s development in the near future?

Shurooq’s mandate includes drawing up investment-related legislation, investing in new projects, and signing and concluding partnership agreements and MoUs that help bolster investment rates and economic activities within the Emirate. Shurooq also focuses on building Sharjah’s economic structure within the framework of sustainable development and environmental friendliness, in line with international standards. By setting up a comprehensive information center that highlights investment opportunities, Shurooq has facilitated development targets with other bodies and organizations, and set up special investment zones and suggested investment-related laws to further facilitate these endeavors. This includes enhancing integration with government and private organizations to ensure achievement of short-, medium-, and long-term goals, as well as encouraging free circulation of information and data between legal, tourism, and economic bodies. Capitalizing on Sharjah’s burgeoning tourism sector, Shurooq has developed, and is continuing to develop, a range of world-class tourism and leisure projects. Shurooq’s portfolio combines retail, cultural attractions, and F&B, offering 26 premium investment opportunities in exceptional master-planned destinations. One such recent notable development is the $21.78 million tourism project on Al Noor Island in Sharjah’s Khalid Lagoon. The island, which extends over an area of 45,470sqm, is the Arab world’s first island to combine nature, art, and entertainment. Last year, Sharjah welcomed more than 1.9 million tourists, a number that is expected to be exceeded significantly this year in light of the large scale celebrations, which include over a thousand international cultural, tourism, and entertainment events, planned to mark Sharjah’s year as Capital of Islamic Culture for 2014. Shurooq has numerous projects in the pipeline, all of which will have great significance in terms of Sharjah’s future development.

Shurooq has also helped others to collaborate with various Sharjah enterprises, aiding the Emirate in becoming a one-stop location for all foreign investors. In recognition of its overall accomplishments, Shurooq was named The Banking Awards FDI Agency of the Year in 2013 and 2014 in the MENA region at the European’s Global Banking and Finance Awards. Additionally, the Authority was named the Top Investment Promotion Agency at the 2015 Best to Invest Award by Site Selection magazine.

As one of the architects of the Emirate’s future, what is your long-term vision for Sharjah not only in terms of economic growth, but also social and cultural development?

We are constantly looking forward and we always set the bar high and encourage others to raise their standards. There is much evidence that our economy continues to develop, and that we are reaching far beyond the UAE. Cultural events like the Sharjah International Book Fair and Sharjah Heritage Days contribute to the long-term social and cultural development of the state. Additionally, Sharjah has over 1,000 mosques, which earned it the title “City of 1,000 Minarets.” This shows that as we continue to build and use the latest technology, we don’t forget our culture and heritage. Keeping true to our roots and traditions is vital for Sharjah. Importantly, Sharjah has always paid special attention to the arts and with culture, and is host to a regular schedule of diverse creative events designed to appeal to the broad spectrum of the community, organized by the many art institutes and centers in Sharjah. Maraya Art Park, one notable example, acts as a platform for regional and international artists, boasting two locations directly on the fascinating Al Majaz Waterfront; the Sculpture Park and Children’s Art center. Furthermore, there is also the Sharjah Biennial, established in 1993, which has grown rapidly from a traditional and regionally focused exhibition into the internationally recognized event. The Emirate takes pride in its unique architecture, an ode to the Emirate’s authenticity, composed of five major components; heritage, traditions, arts, culture, and education. And to promote its tradition, Sharjah continues to maintain the buildings that are such an integral part of its history. Projects range from several heritage villages—in Kalba, Khor Fakkan, and Al Dhaid, which showcase the spirit of Emirati culture and traditional ceremonial practices—to the Heart of Sharjah, which aims, once it is completed in 2025, to be a central hub for all cultural activities in the Emirate. Seeking to reflect what Sharjah was like over half a century ago, the Heart of Sharjah will restore and revamp the city’s traditional areas to create a tourist and trade destination with contemporary artistic touches, yet one that still retains the feel of the 1950s.

As a center for business and investment, Sharjah is in the midst of a truly dramatic transformation. The Emirate has the most diversified economy in the GCC, with no single sector making up more than 20% of GDP, while also contributing to a large proportion—around one-third—of the UAE’s manufacturing sector, as well as having 18 industrial zones spanning an area of 15sqkm.