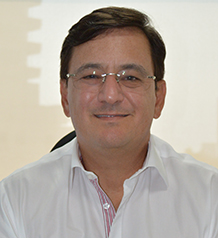 Luis Eduardo Barrios López is a civil engineer with a master’s degree in marketing and sales and financial management. He has worked with A Construir since 2006. Among other positions, López has been the General Manager of S.F Convias since 2010. He also worked at Argos (Agrecon S.A) as Marketing Director from 1991-2004. He was a member of the Colombian Chamber of Infrastructure between 2003 and 2005, as well as a member of the Camacol-North Chapter in 1997.

Share on:
TBY talks to Luis Eduardo Barrios López, General Manager of A Construir, on the company's evolution, investment trends, and expectations for the year ahead.

What are some of the flagship projects of the company?

In Barranquilla, we developed the Corridor of the Maritime Port, a maritime infrastructure concession that provides access to the main maritime ports in the city. This infrastructure represented a turning point for the city and its logistics development. We started the construction in 2010 and completed it by 2014. This infrastructure has been a key element in the development of Barranquilla, providing a solution to traffic problems as well. The greater context of the port development are the FTAs Colombia has signed in recent years, which will leverage Barranquilla’s role and weight in the national economy. We have also just completed a 7,000sqm low thermic emission plant, the only one of its kind in Latin America, with a $8.5 million investment.

What other opportunities do you see for Barranquilla in the context of the FTAs?

The construction sector can strongly benefit from these FTAs and the arrival of foreign investment. It goes without saying that imports will experience rapid development in the upcoming years, especially if foreign exchange rates continue along the same trend.

Foreign investment in construction in the first nine months of 2015 increased significantly compared to the same period the previous year. Will this trend continue in 2016 and beyond?

This trend will undoubtedly continue. There are many Colombians living abroad who have invested in housing and other properties in the last year and this will only increase in 2016. The country is working on replacing oil as one of the main income sources, and peace will also increase the flow of investment into the country, especially the construction sector. Hopefully 2016 will bring positive transformations and projects that will boost the country’s growth and development even more. The country is also in desperate need of tax reform with a long-term vision. This is required to generate greater interest among investors and would help generate further income from other non-oil sectors and boost industrial activity and exports.

What are some of the key infrastructure challenges that Barranquilla still faces?

The city must complete channeling the streams in various areas of the city, particularly the south, which will save many lives. The city also needs to expand current road infrastructure to reduce traffic congestion. In terms of our involvement, we will lead a project on Barranquilla’s only island, La Loma; we received 50% of the land, owned by the government, and purchased the remainder from all the different owners. We will pay back the government with the construction of the new council building for Barranquilla. Eventually, we will urbanize 100ha of the city. This project has a budget of COP450 billion. We will later commercialize the industrial lots of the island, and we are now about to start construction works. The goal is to connect La Loma with the Fair and Conference Center of Barranquilla.

How do you see the company evolving in the future?

We will consolidate the work we have done in our first five years of activity. We have undergone a structural transformation in order to make the next step, and now we want to grow nationally. We will have a role to play in the second wave of 4G projects. We see great opportunities both locally and nationally and we will expand activities to cities such as Bogotá and Medellí­n. We are set to start some key project such as the Children Development Centers for the Atlantic Coast, a project with a budget of COP57 billion.

What are your expectations for the company in 2016?

I hope we have a year as positive as 2015, and our goal is to reach or surpass a COP154 billion turnover. We want to further consolidate and strengthen our position in Barranquilla and the region.