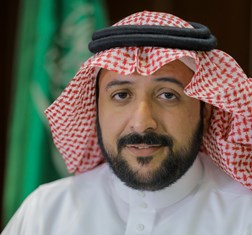 Before his appointment as General Director at Yesser, Ali Nasser Al-Asiri developed his expertise in various local and international organizations specialized in communication and information technology in both the public and private sectors. He holds a bachelor degree in computer sciences from KFUPM and took a wide range of additional courses related to administration, entrepreneurship, and professional specialized businesses, such as interconnected networks and cyber security. Before joining Yesser, he held executive positions in Juniper Networks, Services Sales and Solutions Delivery GM, Huawei Technologies company, STC, and CISCO systems.

Share on:
We are building an entire digital ecosystem that goes beyond the simple electronic access of recent years.

Yesser has been in existence for some time, but has a new mandate for change. Where do you come in?

Yesser has an important mandate in the digital transformation. One of the pillars of the digital transformation is digital government, and we are currently moving from e-government to digital government. We are building an entire digital ecosystem that goes beyond the simple electronic access of past years. Instead, we are focusing on three things: increasing the number of digital services delivered by the government to citizens and their integration; pushing, motivating, and enabling government agencies to use shared IT platforms such as data centers of financial platforms; and building standards, measurements, practices, and architecture to deploy IT in the government within the enterprise architecture office. We will set up a national office that governs IT deployment in government entities and provides standards, measurements, practices, and architecture. The value of this is to align each agency with a strategy. In the past IT spending was led by technology, which caused a great deal of waste in spending and parallel implementations, since it was not in line with a strategy. For this last goal, we have three important KPIs. Number one is the UN’s e-government ranking, where we scored number 44 in 2016; by 2020, we should be ranked no lower than 30. Number two is open data, which we will focus on significantly. We have a second version of our open data platform coming in 2018 that will be extremely smart and intelligent. We are working with the government to publish no less than 200 data sets on the platform in 2018 to improve our ranking from 74 to 69 in the open data parameter. The third KPI is achieving 20% savings in the government’s IT expenditure.

What approach will Yesser take, and what authority does it have to impose comprehensive strategies?

To be successful, digital government needs to be led by all. In the past, there was no central authority for this effort, so our strategy has been to work with the entire government. We will sit down with all of the ministries and create digital strategies. Additionally, Yesser now reports directly to the National Digitization Committee, a committee headed by the Ministry of Communication and Information Technology that has members from all major ministries. This change and new structure will drive transformation within 2018 and beyond.

How does your focus on citizens influence how you carry out operations?

A decade ago, we used to do e-government as electronic transactions, which are limited in scope. Digital government is about the human touch and the values this implies. It is about talent, development, and user experience. Our target, for example, is not to go to a paperless government but to a complete digital experience that can truly satisfy citizens’ needs. We have an ecosystem called e-Murasalat that is an e-correspondence system. We seek to eliminate paper communication within and between government bodies. The new system is a highly secured, automated, and electronic system that will serve government agencies as well external communication. Our target by 2020 is to have more than 160 agencies using it, leaving us with 85% paperless government. Citizens do not care about letters being sent from ministry to ministry; however, they care about all the ministries working together, as this means faster, better service. The e-services that help citizens today are because of the backend system, and whatever we do has to reach the citizen.

What do you hope to achieve within the next 12 months?

We are focusing on the KPIs of the UN ranking, open data, and wise spending in IT. In the immediate short-term, our biggest priority is the unified portal saudi.gov. We currently have dozens of platforms, which are not yet citizen-centric. Our target this year is to revamp Saudi.gov.sa and implement the first waves of the 100 most needed government services. The second biggest priority is the e-Murasalat ecosystem.