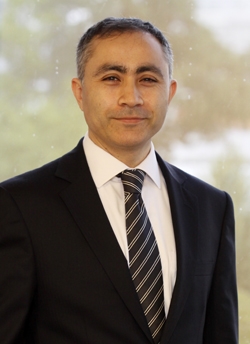 Born in 1969 in Ankara Turkey, Birol Ergüven received his BSc and MSc degrees from the Mechanical Engineering Department of Middle East Technical University in 1993 and 1996, respectively. Right after his graduation he started his professional career at TUBITAK as a Research Engineer. After 1994 he started working in the field of trading, sales, and marketing of industrial equipment. Starting from 1998 he worked at TEMSA as a Product Manager and received his MBA. In 2004 Birol Ergüven stepped into the energy sector with Akenerji, working as a Sales and Marketing Director. He has been leading Limak Energy Group as CEO since 2011. He also established the Energy Traders Association (ETD) in 2011, where he is a founding board member and Vice-President. Furthermore, he is the Vice President of Energy Council in the Foreign Economic Relations Board and a member of the Energy Chamber in Union of Chambers and Commodity Exchanges of Turkey (TOBB).

Share on:
"Developing renewable energy is an important part of our corporate strategy."

How would you characterize Limak Energy’s current position in the Turkish energy sector?

Turkey is experiencing a rapid increase in general energy consumption and it is hard to find a benchmark country to gauge this change. So we are keeping the track of everything in the energy business. We are evaluating all of our options, from green field projects to privatization, and looking to acquire more licenses. We have 870 MW of hydropower capacity and our aim is to exceed 1,000 MW in the next four years. If we can acquire the licenses, we will continue to build more capacity.

You recently acquired the BEDAÅž grid. Where does infrastructure expansion on the distribution-side fit into your overall plans?

Limak and its partners (CLK Group) is the biggest distribution group in Turkey with four distribution areas and a nearly 30% market share. This amount will correspond to nearly 15,000 MW of consumption in a five-year period. As a part of a three-party consortium, our goal is to cover one-third of this capacity, which is nearly 5,000 MW. Thus, we believe that our distribution areas will provide advantage to us. Additionally, as Limak Energy, we are a well-known retailer and have our own retail customer portfolio. We are closely watching privatization of lignite-fired power plants, and are expecting to acquire at least one in Turkey. Moreover, we are planning to construct our own coal-fired power plants. All of the decisions made by Limak Energy are derived from the market’s needs. Based on what we learned from other countries, we are diversifying our investments in electricity generation. We have started to import power from the Bulgarian transmission network, and we are working with almost every electricity trading company in Southeast Europe. Additionally, we sell all the electricity generated in Kosovo. Due to the nature of the electricity market, we often experience excesses and deficits, so we are constantly buying and selling electricity in Southeast Europe.

“Developing renewable energy is an important part of our corporate strategy.”

Do you see an expansion of the electricity trading business, not only in Turkey, but also in Southeast Europe, and, as that process continues, do you plan to take on new opportunities?

We will invest more in Southeast Europe, where we expect further growth in electricity trading and consumption. Our careful expansion into the Bulgarian market has helped us to understand the regional market, and Bulgaria is now a critical part of our strategy. We plan to expand into Romania based on our success in Bulgaria, and we will register our company there in the near future. That will be followed by Hungary. We have also established a company in Serbia, and we plan to start energy trading there soon. Looking further ahead, we are investigating electricity generation opportunities in Kosovo. The current electrical infrastructure there is old and unreliable, and will require significant upgrading. Our plans involve lignite-fired generation plants, with which we hope to turn Kosovo into a net exporter of electricity. We also plan to use transmission lines in Southeast Europe in order to bring more reliable distribution to the region.

Are transmission lines an area that you are interested in investing in?

Because of strict regulations, transmission lines are not something that we can invest in, but we can do the rest. By the end of 2014, Turkey’s transmission lines system will be linked to Europe at full capacity. Currently cross border capacity is 950 MW between Turkey and ENTSO-E, which is less than the planned capacity of 2,000 MW. When all the capacity becomes available, this will really make a significant difference. The European side of Turkey is poorly connected to the Anatolian side. The electrical connection with Europe is actually stronger than the connection between the two sides of Turkey. In 2015, there will be additional transmission capacity between the Asian and European sides of Turkey; however, these developments will not keep up with projected demand. To the east, more transmission lines between Turkey and Georgia are being built due to significant investment in the region. This development will link the grids of Georgia, Turkey, and Europe. The region around Turkey will soon be integrated into one of the largest electricity sales, generation, and trading markets. We expect that Limak Energy Group will be at the center of this new market.

Do you see evidence of regulatory progress inside Turkey? Do you expect that further liberalization will help your business, especially in terms of electricity trading across the region?

Liberalization in the energy market has been an important part of Turkey’s progress. The current government has been bold and decisive in promoting market reform. Privatization has been a cornerstone of market liberalization in Turkey. The privatization of electricity distribution is going very well and is an important part of our success. However, certain steps are still necessary in order to reach a fully liberalized power market and it’s a given that some steps will take time. Turkey needs to integrate into the region in order to reach its full potential. Given its location and makeup, Turkey is positioned to become an important energy hub, but in order to achieve that aim we still need a fully liberalized market. This will require that the state further decrease its share of electricity generation. The Turkish Electrical Distribution Company (TEDAÅž) is set to cease electrical generation, which will open the market to more private companies. State-owned thermal power plants are also undergoing privatization. The hydropower plants and other critical infrastructure, however, will likely remain with the state, but their privatization is not crucial.

What are some of your main investments in terms of renewables?

Renewable energy is a large part of our portfolio, and developing renewable energy is an important part of our corporate strategy. While competition over transmission line capacity concerns us, we are also involved in different renewable energy projects, such as hydro, wind, and solar power. We have developed 400 MW in wind farm capacity, and while it is not yet licensed we are working hard to obtain the necessary licenses to begin generation. Currently, we have license applications for 70 MW solar capacity and the total capacity allowed in Turkey is now 600 MW, which leaves significant room for growth. We are also undertaking feasibility studies for unlicensed solar projects. Within a year, we will be able to establish unlicensed solar projects in Turkey.

Are you interested in expanding into Africa as well?

In Nigeria we recently became the technical partner of a distribution company. We see Nigeria as a market with growth potential. Within two years we will be visiting the area in search of more investment opportunities in both generation and distribution.