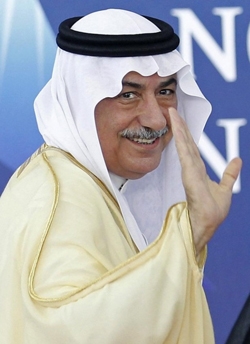 Ibrahim bin Abdulaziz Al-Assaf was born in 1949 and has a PhD in Economics from Colorado State University, having previously obtained a Master’s in Economics from University of Denver and a degree in Economics and Political Science from King Saud University in Riyadh. As well as a diverse academic career, he has also held positions at the IMF and the World Bank Group. He has been the Minister of Finance since 2003, having previously been Minister of Finance and National Economy between 1996 and 2003 and Minister of State and Member of the Council of Ministers from October 1995 to January 1996.

Share on:
"Government spending has supported growth in the non-oil economy."

The global economic recovery is beginning to expand to include more of the developed countries. However, a number of challenges remain, particularly the monetary policy shift in the developed countries, especially in the US, from an unconventional approach to stimulate the economy to a traditional one. This shift represents a challenge, particularly for the economies of emerging markets and developing countries.

The discussions at the G20 meetings and the IMF/World Bank meetings held recently in Washington, DC highlight the need to continue adopting supportive economic policies that promote a balanced, sustainable recovery. The G20 countries have committed to adopting strategies to promote growth by focusing on reforms in employment, investment, competition, and trade to boost global growth rates by 2% in the next five years, underscoring the international community’s commitment to act in concert to preserve the gains achieved in recent years. The Kingdom, as a member of the G20, presented its strategy for growth at the meetings of the G20 working group tasked with this work. The Kingdom’s strategy is based on the orientations of its development plan. It provides for continued action to promote investment in infrastructure, education, and health and to promote the role of the private sector and public-private partnerships (PPPs) in further diversifying the economy, creating job opportunities, and improving economic productivity and competitiveness in a stable financial and monetary environment.

“Government spending has supported growth in the non-oil economy.”

His Majesty’s reign has been filled with initiatives aimed at the country’s prosperity and growth with a focus on reform, integrity, combating corruption, enhancing government performance, empowering women, and adopting programs and policies, which have helped the economy grow at unprecedented rates.

During the past year, the Saudi economy achieved real growth of 3.8%, despite the decline in oil sector growth. Government spending has supported growth in the non-oil economy, and the private sector has performed well, growing at a rate of 5.5%. Saudi Arabia’s economic policies are designed to achieve financial and monetary stability and to improve the business environment. These policies are reflected in the solidity and strength of the Kingdom’s economy and solvency, with Fitch Ratings recently raising the Kingdom’s sovereign rating from AA- to AA with a stable outlook.

In reference to these efforts, the report of the Article IV Consultations of the IMF for 2013 emphasizes the superior economic performance of Saudi Arabia among the G20 countries in recent years and the favorable outlook for the Saudi economy. The Fund’s Executive Directors have welcomed the measures adopted by the Saudi government to strengthen public financial management and the government’s ongoing steps to support fiscal development and strengthen financial regulation and supervision. They have also commended the large expenditure on education and training. The Fund expects the Saudi economy to grow at a rate of 4.1% this year, and 4.2% in 2015.

Key developments in the Saudi economy during the past year include the approval of the Code of Procedures and the organization of the Public Transportation Authority. Progress was achieved in the implementation of public transport projects (including the signing of the largest contract of its type for public transportation in Riyadh as a single integrated project), the Promise-of-the-North Mining Project, and the General Education Evaluation Commission. The Saudi Arabia Monetary Agency (SAMA) issued licenses to engage in real estate finance and finance lease activities. The Civil Aviation Authority successfully closed its second issue of instruments—exceeding SAR15 billion—for financing the King Abdulaziz International Airport Project in Jeddah and King Khalid International Airport Project in Riyadh.

The 2014 budget focuses on development projects in the areas of education, health, security, social services, water, roads, electronic services, and support for scientific research. A total of 2,330 contracts worth SAR157 billion were tendered last year. The specialized government funds have continued to provide credit for the implementation of PPPs, which we hope will further promote the private sector’s role, particularly in creating job opportunities for citizens.

Due to the importance of housing in improving the population’s standard of living, government policy has given it the priority it deserves. The implementing regulation for the Real Estate Finance Law is expected to promote sustainable real estate financing by creating the necessary institutional framework for encouraging banks and financing companies to provide financing to citizens and real estate development companies.

SMEs enjoy major support. The Saudi Credit and Savings Bank is making major efforts to coordinate and provide financing for this vital sector, which is an important source of employment. The Kafalah program, which is managed by the Saudi Industrial Development Fund, plays an important financing role in cooperation with the commercial banks. On this occasion, I would like to express my gratitude to the commercial banks for their cooperation and involvement with the program and my hope for more of the same.