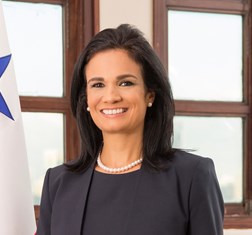 Isabel Saint de Malo is the Minister of Foreign Affairs and Vice President of Panama. She has over 20 years of experience in consulting, development, and implementation of public policies in Latin America. She has a degree in international relations from Saint Joseph’s University and a master’s in business administration from Nova Southeastern University.

How would you evaluate the work and initiatives launched by the ministry thus far?

Today, Panama has an active and proactive role in the global agenda, with clear leadership in the Development Agenda. This is recognized by the international community and international organizations. The experience of Panamanians such as Natalia Kanem, Esmeralda de Troitiño, and Laura Florespara occupying positions of leadership in the UN and the IACHR have been recognized, and Panama was selected to chair committees and conferences of the International Labor Organization, International Organization for Migration, Community of Latin American and Caribbean States, Inter-American Committee against Terrorism, and Association of Caribbean States, among others. Panama has for the first time formed a national cooperation plan, Panama Coopera, which attracts and focuses on the country’s priorities, and has made official the incursion of Panama as a cooperating country. It also incorporates a new strategy of cultural diplomacy that promotes Panamanian cinema, gastronomy, and music through the foreign service. This government has strengthened its relationship with Latin America and made historic approaches with countries from other regions with which we did not have such a close relationship, seeking to diversify and increase opportunities for the country. A great example is the establishment of diplomatic relations with the People’s Republic of China, a step that will benefit Panama diplomatically, economically, socially, and commercially. The strengthening of institutions and the modernization of processes have been key pillars of our management and one of the main legacies of this administration. All services for citizens have been automated, from the procedures of authentications and legalizations, to privileges and diplomatic immunities, consular services, and internal procedures for the acquisition of goods and services.

What are the main advantages of diplomatic relations with China, and what can Panama expect in the coming years?

After concluding a feasibility study with positive results, Panama and China officially launched negotiations for a trade agreement during a formal ceremony held in Beijing. With such an agreement, Panama will strengthen its commercial relationship with the second-largest economy in the world, boosting its logistics platform and consolidating Panama as a center of operations with added value for large Chinese technology companies. In addition, the trade agreement would boost Panamanian exports to the Asian market, with great potential for agricultural, fishing, and agro-industrial products, which would have better access to this market with preferential treatment. Likewise, we aim to make the trade agreement an important catalyst for continuous sustainable development, as well as diversification, competitiveness, and scope of exportable service sectors. One of the main findings of the feasibility study is that Panama and China have complementary economies. Therefore, in terms of prospects, we are confident the trade agreement will increase Panamanian exports to China, a country that currently ranks third as the destination of Panamanian exports, worth more than USD42 million in 2017.

What are the priorities for next year?

Regarding foreign policy, strengthening the bilateral agenda with China is a priority. The relation is already supported by 25 bilateral agreements. In 2018, we will also carry out high-level visits to key countries and receive high authorities from several nations under our new Falcon Policy; we are working on opening embassies in Australia, Africa, and the Middle East. Panama will host World Youth Day, an important showcase of our country to the world. Finally, it is an extremely important year for the consolidation of the processes of modernization and institutional strengthening. We will hold the fifth and sixth entry contest for the diplomatic and consular career. It is a priority for this administration to have a competitive diplomatic branch—one that is represented by the best professionals.