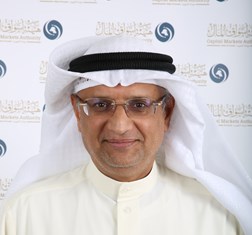 Share on:
CMA was established based on the vision of HH the Amir Sheikh Sabah Al-Ahmad Al-Jaber Al-Sabah to transform Kuwait into a commercial and financial center in the region.

What major aspects enabled Kuwait’s AA/A-1+ S&P rating as well as its reclassification to Emerging Market status by MSCI?

CMA conducted a GAP analysis and found the market needed major reforms in the Post-Trade side. Thus, CMA started—along with Kuwait Clearing Company and Boursa Kuwait—the Market Development Project to be implemented in four phases. We launched the first phase in May 2017, and it included key changes such as T+3 settlement cycle with DvP mechanism, international-style corporate actions timetable, custodian rejection, enhanced default procedures, reduced tick size, and a new closing auction mechanism. In April 2018, we launched the second phase and made further changes that involved new market segments (premier, main, and auction), buy in board, off-market trades processing streamlined through automation, new indices, circuit breakers, and the enhancement of in custodian rejection facility. We also separately launched an OTC platform in November. Kuwait’s progress in trade clearing and settlement, including unifying settlement cycle to a T+3 and instituting a delivery versus payment (DvP) model 1, was key for the reclassification. FTSE announced Kuwait’s upgrade in September 2017, followed by S&P Dow Jones’ announcement to add Kuwait to the Global Benchmark Indices in November 2018 with an emerging market classification. In June 2018, MSCI announced the MSCI Kuwait Index would be included in the 2019 Annual Market Classification review for a potential reclassification from Frontier Markets to Emerging Markets status. The positive decisions from international index providers came as a result of the structural reforms in securities regulations—most importantly issuance of law No. 7/2010 and its bylaws—in addition to market reforms.

In light of the privatization of Kuwait’s stock exchange, what key role is CMA playing?

The privatization of Boursa Kuwait will be in three phases. Firstly, between 6% and 24% will be allocated for public entities; then between 26% and 44% will be allocated to companies listed in the exchange in conjunction with an International Securities Exchange Operator, or an International Operator acting solely; and finally 50% shall be publicly offered to Kuwaiti citizens. Eventually, CMA decided to offer 44% of Boursa Kuwait shares to potential investors and 6% to the Public Institute of Social Securities. The tender was awarded to a consortium comprising of Athens Stock Exchange, National Investments Company, First Investment Company, and Arzan Financial Group. CMA intends to begin the final phase of the privatization, an initial public offering of 50% equity stake in Boursa Kuwait to Kuwaiti citizens during the upcoming year. Once the privatization of the Kuwait Stock Exchange is finalized, CMA will continue in its role as a capital markets regulator on Boursa Kuwait Securities Company. Privatizing the stock exchange will ultimately strengthen Kuwait’s position as a regional financial hub and provide the private sector with an even stronger role and opportunity to develop the national economy, in line with Kuwait Vision 2035. CMA has initiated a market development program in line with international best practices that resulted in the upgrade of Boursa Kuwait by both FTSE Russel and S&P Dow Johns indices.

With the recent decision to incubate fintech companies, what outcome do you expect?

CMA has started its own project toward embracing fintech innovations in Kuwait with the goal of incorporating technology in the financial sector, achieving greater financial inclusion, and establishing a local fintech ecosystem with the proper regulatory support and infrastructure, thereby strengthening Kuwait’s international position in regard to fintech. Supporting and encouraging fintech innovations and automation of financial services will help add economic benefits by reducing the cost of operations and transactions, boosting financial inclusion, and delivering more improved and convenient financial services to a wider segment of the market. CMA’s fintech project aims to establish an accommodating framework that will focus on a collaborative approach with innovators in the field of fintech to ensure new developments.