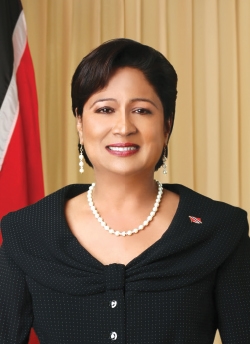 Kamla Persad-Bissessar is the first female Prime Minister of Trinidad and Tobago, taking her oath in 2010. She began her political career in 1987, serving as an alderman for the St. Patrick County Council until 1991. She entered Parliament for the first time as an Opposition Senator in 1994 and was elected as a Member of Parliament as the 1995 United National Congress (UNC) candidate for Siparia. Between 1995 and 2001 she served in various cabinet positions, including Attorney General, Minister of Legal Affairs, and Minister of Education. In 2010 she won leadership of her party, before becoming Prime Minister. She was born in 1952 and has an academic background in education and law.

Share on:
In 2013, Trinidad and Tobago held the Chairmanship of the Conference of Heads of Government of CARICOM. How is CARICOM’s reform process proceeding, and which of its objectives have you […]

In 2013, Trinidad and Tobago held the Chairmanship of the Conference of Heads of Government of CARICOM. How is CARICOM’s reform process proceeding, and which of its objectives have you prioritized?

During the conference I stated that CARICOM is conscientiously working toward creating a more efficient integration movement. The process of reform in the community has also been proceeding apace, and we have been seeking the input of all our stakeholders via consultations undertaken by a team of change facilitators, led by the secretary general. To date, national consultations in all member states and two associate members have been completed. With respect to the Draft Strategic Plan for the Caribbean Community 2015-2019, which was presented to the Heads, it is integral that the plan, once approved, becomes a living, vital document for our community and should be used as a standard for assessing our performance and progress. Trinidad and Tobago wholly supports the thrust of the proposed vision, mission, and core values for the Community, which were formulated through engagement in a broad, public process. The six integrated strategic priorities—building economic; social; environmental; and technological resilience; and strengthening the CARICOM identity, spirit of community, and community governance—have further been elaborated into a strategic framework. The integration of the strategic priorities is important as we must seek to avoid an entangled landscape of overlapping programs with inconsistent goals.

Colombia is Trinidad and Tobago’s third largest import partner. What is the importance of this trade relationship, what tariff benefits does it enjoy and what competitive exports can the country offer Colombia in order to boost bilateral commerce?

In 2011, Colombia was recorded as Trinidad and Tobago’s third largest import partner, with imports from Colombia accounting for approximately 11% of total imports for Trinidad and Tobago. An analysis of the trade between both countries revealed that Trinidad and Tobago recorded a negative, primarily declining trade balance with Colombia during the period 2006-2011. We are the leading CARICOM exporter to and importer from Colombia. Our exports are significantly composed of energy products and include other liquefied petroleum gases, natural gas, urea, anhydrous ammonia, methanol, and bars and rods of non-alloy steel, while our imports from Colombia include other sugar, other raw cane sugar, palm oil and its fractions, and coconut, palm kernel, and babassu oil. My government regards Colombia as an important trading partner as Trinidad and Tobago is focused on expanding access to markets in Central and Latin America given their geographical proximity. Colombia is regarded as an interesting and viable market for CARICOM.

Trinidad and Tobago’s Health Minister, HE Dr. Khan, said he intends to visit Colombia to seek specialists. What is your government’s vision of what Colombia’s health sector can offer your nation?

A high level team from our Ministry of Health visited Colombia in 2013. The team visited several health institutions in Bogotá, Medellí­n, Barranquilla, and Cali to gain exposure specific to the clinical operations of high-quality medical institutions in Colombia, and to discuss the provision of low-priced medical services, the recruitment of foreign healthcare professionals, and the training of local medical practitioners. A follow up visit by our Chief Medical Officer and several consultants in the fields of cardiology, oncology, and pathology is currently being planned. Colombia has been interested in developing health linkages with Trinidad and Tobago, and we welcome the opportunity to partner with Colombia as my government strives to provide quality and affordable healthcare to our citizens.

Last year, Colombia’s Foreign Relations Minister, HE Holguin, agreed to convene a meeting of airlines to examine the prospects of enhancing air links in the wider Caribbean and South America. How is Trinidad and Tobago advancing toward better air links with its Latin American partners, and what benefits do you see in linking with Colombia?

In June 2013, consultations on airline connectivity were held in Santo Domingo in the context of the Association of Caribbean States (ACS). Trinidad and Tobago’s Minister of Foreign Affairs was present at the meeting. Discussions centered on the potentially great synergies between our local national airline, Caribbean Airlines (CAL), and AVIANCA, which could be beneficial to Colombia and Trinidad and Tobago as well as Latin America and the Caribbean. Officials from CAL and AVIANCA have agreed to examine potential scenarios for fares, schedules, payloads, new routes, and/or sharing existing routes. With my government’s initiative to aggressively target the emerging markets of Latin America, improved air links with Colombia would offer another incentive for potential investors.