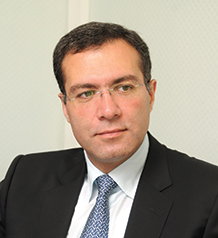 Shahmar Movsumov is a graduate of the International Economic Relations Faculty of Moscow State Institute of International Relations, and has a Master’s in Public Administration from the John Kennedy School of Government at Harvard University. After graduation, he worked for an extensive period from 1995 to 2005 at the National Bank of Azerbaijan Republic, becoming its General Director in 2005, before moving to SOFAZ as Executive Director in 2006. Since 2006, he has also served as Chairman of the Government Commission on the Extractive Industries Transparency Initiative.

Share on:
TBY talks to Shahmar Movsumov, Executive Director of State Oil Fund of Azerbaijan Republic (SOFAZ), on the Fund's durability in the face of economic volatility, and its investments in the transport, industry, agriculture, education, and energy sectors.

The first European Games provides a distinctive opportunity to develop national infrastructure. What investment opportunities have the Games provided so far?

A well-developed national infrastructure has been one of the main priorities of the government recently. Funded mainly by SOFAZ, the entire infrastructure of Azerbaijan has been completely rebuilt. These, and many other significant achievements, have created favorable preconditions for holding the first European Games in Azerbaijan. The promotion of such a tournament is a significant event, serving the objectives of the long-term development of sport and proliferating the vigor of the country on the international scene.

The global oil price has been substantially weakened in 2014. What strategies has SOFAZ employed to adapt to this?

SOFAZ serves as a buffer between the volatility of energy prices and public finances. One of the three primary objectives of the fund is the preservation of macroeconomic stability. Due to significant reserves accumulated and a well-balanced economic policy, our public finances are well insulated even during difficult times such as the recent turmoil in the energy markets. Over the past 15 years, SOFAZ’s investment strategy has been rapidly evolving, encompassing new asset classes to maximize our long-term risk adjusted returns, which is in line with the government’s strategy for economic diversification.

This is one of the main objectives of SOFAZ. Improvement of the road network is a priority for diversification of the economy. The new Baku-Tbilisi-Kars railway line project will connect the Trans-European and Trans-Asian railway networks, enhancing the transit capacity of the region’s countries, which will restore the historic silk road. This project is particularly important for accelerating the intra- and inter-regional integration processes. SOFAZ has allocated $540 million to finance the project. As the urgency for social and agriculture infrastructure has been increased, SOFAZ continues to finance the Samur-Absheron irrigation system reconstruction project. The project serves three main missions: energy security, as water from Samur-Absheron canal to Jeyranbatan Lake helps to save 167 million kV/hour in electricity consumption, between $13 million and $15 million annually; water security, as there will be uninterrupted water supply to 150,000 hectares of land and 31,000 hectares of newly irrigated lands in Absheron peninsula; and food security is maintained through the progressive development of agriculture and entrance to new markets, reducing dependence on agricultural imports.

The state program on the education of Azerbaijan youth abroad in the years 2007-15 is one of the major projects funded by SOFAZ. Now that 2015 has arrived, how would you evaluate the project and what further opportunities are there?

The strategy for “turning black gold into human capital” launched by President Ilham Aliyev is being successfully implemented. The program that you mentioned is one of these core initiatives aimed at improving the country’s human capital development. It has given an opportunity to many talented students to study in the priority fields in the world’s leading universities, and thus contribute expertise gained to the medium and long-term sustainable development goals. Since the outset of the state program, SOFAZ has allocated $116 million from 2008 to 2014, including $32 million in 2014.

It was announced in June 2014 that there were plans to invest up to $1.8 billion in Chinese yuan. What are the reasons for this venture and at what stage is the project?

Interest in the yuan is stipulated by growing investment opportunities in the financial markets of China. Investment flows into China have expanded significantly over the past decade. SOFAZ intends to become a stakeholder in this trend by actively evaluating investment opportunities for China’s markets. Investments in the yuan would bring additional currency diversification to our asset holdings, yielding better risk-adjusted returns of the overall portfolio. SOFAZ explores long-term opportunities in China’s financial markets. Therefore, starting initially with investments in Chinese government securities, we expect to widen our exposure to China in the future, staying within the guidelines of SOFAZ’s long-term investment objective. The Chinese onshore market remains highly regulated for foreign institutions. Foreign investors must go through formal procedures in order to start investing. We already completed negotiations with People’s Bank of China and consented to invest approximately $500 million in China’s financial market. Currently, we are at the stage of signing the contract.

SOFAZ has invested $500 million in Russian VTB Group in 2015. What does this suggest about Azerbaijan-Russian trade and business relations?

When SOFAZ started to diversify its portfolio, its number one priorities were the well-known regions and those that had long established trade and business relations with Azerbaijan. The Russian ruble and Turkish lira were the first two emerging country currencies included in SOFAZ investment portfolio. Participation in Bank VTB’s secondary public offering was a successful step resulting from such a diversification practice. VTB is the second largest bank by size of assets in Russia and SOFAZ has invested in it along with two other sovereign wealth funds—Qatar Investment Authority and Norges Bank. The bank has attained almost all of the targets set in its strategy from 2010—14 and the further development strategy will enable VTB to increase its activities in the region and further improve operational efficiency. Bank VTB has a wide set of branches across the CIS region which includes a branch in Azerbaijan that contributes to the development of the economy. We are positive on further developing our partnership with VTB Group and look forward to the continuation of fruitful cooperation.

SOFAZ collaborates with several international institutions such as the IMF, the World Bank, IFC, and the US Trade and Development Agency (USTDA). What have been some of recent developments of these collaborations?

In 2006, SOFAZ joined World Bank’s Reserves and Advisory Management initiative. This program entailed not only the management of a $100 million portfolio on behalf of SOFAZ but also opened up a new front for further cooperation as SOFAZ’s employees started attending different seminars and events arranged by the World Bank through the RAMP Program. SOFAZ’s cooperation with IMF began with the Fund’s first Private Equity commitment made to African, Latin American, and Caribbean Fund managed by IFC Asset Management Company in 2010. Since that time, SOFAZ made two further commitments to IFC AMC Catalyst Fund and IFC AMC Global Infrastructure Fund. All three funds are performing in line with our expectations and the outlook on their future performance is positive. Furthermore, IFC Asset Management Company and SOFAZ are closely cooperating in other related fields such as sharing experience, discussing the market environment, and liaising on each other’s industry network. Relations with USTDA began after the visits of delegations from the American Chamber of Commerce in 2002. SOFAZ has cooperated on many fronts with USTDA including in the area of the institutional capacity building.