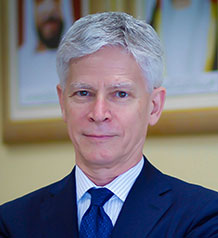 Dr. Thomas J. Hochstettler was educated in the US and Germany at the University of Michigan, the University of California/Berkeley, and the University of Würzburg, in the fields of history, economics, and business administration. He has held faculty appointments at the University of Michigan, at Bowdoin College, where he was also Dean for Administration, and at Stanford University. He subsequently served as a Senior Economic Advisor in Finance and Administration at Stanford University, as Associate Provost at Rice University, as founding Vice President for Academic Affairs at Jacobs University in Bremen, Germany, and as President of Lewis & Clark College in Portland, Oregon. Since 2009, Dr. Hochstettler has worked in the UAE, first as Provost and later as Acting Chancellor at the American University of Sharjah, and now as the President of the Petroleum Institute in Abu Dhabi. He is a frequent commentator on international education and on topics in educational finance and reform. Dr. Hochstettler has sat on many boards and served formerly as chair of the Oregon World Affairs Council. He currently serves on the Board of Directors of the International Student Exchange Program in Washington, D.C., which he chaired from 2012 to 2015. He also serves on the Steering Committee of the Abu Dhabi International Research & Development Conference and Exhibition (ADRAC) and on the Executive Steering Committee of the Abu Dhabi International Petroleum Exhibition & Conference (ADIPEC).

Share on:
"The dynamics among universities are totally different from those at play in the corporate world."

ADNOC has given you a mandate to carry out R&D surrounding the development of oil fields. How is the PI going to develop that program?

It is important to realize that right from the beginning of the PI in 2001, we have been at pains to ensure that every faculty member whom we hire is a qualified researcher in her or his discipline. The typical faculty contract at the PI allows for 30% or more of a professor’s time to be spent on research. That is certainly the case in engineering, and it is also increasingly the case in the natural sciences. Therefore, we have always been engaged in research to one extent or another. In fact, if you look at faculty productivity indices, the PI has without doubt the highest impact factors of any institution in the UAE. That is because our faculty are exceptionally well published in their respective fields of research. The concentration of research at the PI is in upstream enhanced oil recovery (EOR), and now in gas as well. The research that is on-going at the PI in electrical, chemical, and mechanical engineering also relates overwhelmingly to EOR.

Once the PI Research Center (PIRC) is up and running, it will have an annual budget of $33 million. Can you describe in more detail how EOR will be enhanced moving forward?

There is work going on in several disciplines at the PI. In chemical engineering, for example, this involves looking at the effects of injecting different polymers, water, or low-saline solutions into existing oil fields. It includes examining at the micro and nano scales what the impact of these measures are likely to be and how they work in different environments. In conjunction with BP, we are building a core flooding facility that will enable us to simulate exactly what happens at the microscopic and nano levels if you inject one solution as opposed to another. In the field of electrical engineering, to cite another example, the use of electro kinetics down-hole to stimulate oil flow toward the well head is another leading field of inquiry that is being pioneered here. Once we gain insights into these and other technologies, we will be better able to apply them in real life, real time situations in the field. Given the normal lead times for new laboratory-tested ideas to reach maturity, it may take as many as three to five years before these ideas are fully realized in the field. Despite the time and resources that are required to make advances in these and many other technological areas of research, we are convinced of the value added by such research and are very pleased to be part of the greater mission of ADNOC to extend the boundaries of EOR beyond current practice.

The educational arm of Vision 2030 is formed of PI, the Masdar Institute of Science and Technology, and Khalifa University of Science, Technology and Research (KUSTAR). How do you qualify this assessment?

I agree with it completely. Individually and collectively, these three exciting institutions have moved through adolescence and are becoming known as a group of institutions that work together and collaborate by an ever increasing measure. I have been collaborating in one way or another with colleagues from Masdar and KUSTAR from the very moment I arrived in the UAE some seven years ago. Even then, we were already beginning to see each other as resources instead of as competitors. In the meantime, we have increased the interaction among our faculty considerably. The dynamics among universities are totally different from those at play in the corporate world. For us, the more we share, collaborate, and know about each other’s work, without giving away industrial secrets outright, of course, the more we can avoid unnecessary competition regarding the disposition of scarce resources. There is more that can be done. For one thing, I would like to see our institutions focus their resources on creating consolidated and coordinated investments in instrumentation and research laboratories. The PIRC is a great step in that direction. Although we are an ADNOC facility, the more we can create opportunities for faculties at other institutions to have access to cutting-edge technology, the better off we will all be. In particular, I am thinking of electronic microscopes or isotope testing facilities, and being able to work in the rarified field of nano technology, but without each institution having to buy a separate set of scanning electron microscopes on their own. If we can put a bank of them here for different kinds of research and create a central instrumentation facility (CIF) as in the US, we can leverage the resources that exist in each of our institutions without duplicating the expense.

In terms of diversification, PI undertook the Solar Car Project. What other projects do you have on-going that involve renewables?

I’m glad you asked about that! It is not generally known that our solar car broke world records in the qualifying laps at the Abu Dhabi Solar Car Challenge in 2015, even though we came in second in the race itself. At the risk of sounding defensive, I should note that our second place finish was not because our car didn’t have the speed to win, but because we did not have the controls on the engine that would allow us to cruise just at the speed limit without exceeding it. This meant that we broke the allowed speed limit for the race too often and were penalized accordingly. Nevertheless, the entire experience was an extraordinary breakthrough for us. It introduced us as an institution to the potential for research and technological advancement in renewable energy that we can expand and exploit here at the PI. We are also proud of our association with Tokai University in Japan, which was our partner in this. We are now expanding our relationship with Tokai University and looking for new paths of collaboration. There are other things that we are contemplating in the area of solar. We intend that two of the new buildings that are being built on campus to be totally self-sufficient based on solar energy generation. The new PIRC will have green laboratories as part of its roster of research facilities, and we will be looking at solar energy, as well as at other developing technologies, such as lithium-based battery technology for the storage of energy. We are also interested in finding ways to save energy, and particularly to save on fossil fuel expenditure. The PI as an institution and ADNOC as a corporation understand fully that it is far better to earn a profit from petroleum products by selling them in parts of the world that are without adequate energy resources, rather than expending that fuel domestically. In the interests of economic prosperity, finding alternative energy solutions, whether it is wind, solar, or other forms, is certainly something we are becoming increasingly involved in.