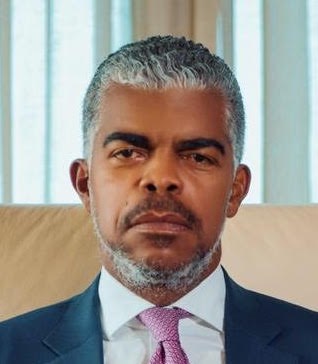 Ricardo Viegas D’Abreu completed a degree in economics at Universidade Lusíada de Lisboa in Portugal and holds an MBA from the University of Bath. In 1997, he was part of the founding team of the first Angolan private bank, Banco Angolano de Investimentos. In 2006, he was co-founder of Banco de Negócios Internacional (BNI), where he served as vice-chairman of the board of directors. In 2009, he was appointed vice-governor of the National Bank of Angola (BNA). After leaving BNA in 2015, in addition to teaching postgraduate courses at the Catholic University of Porto, he served as consultant to the minister of finance and vice-chairman of the board of the Angola Stock Exchange and Derivatives General Assembly, as well as in the creation of the National Stability Council Financial. He was appointed Minister of Transport in 2018.

With the overarching goal to improve the quality of the Angolan transport sector across all areas, including ports, airports, railways, and logistics platforms, the Ministry of Transport has laid out a 20-year masterplan accordingly.

In these three years at the helm of the Ministry of Transport, how has the sector evolved, and what proposals have been put in place to boost its activities?

When we were appointed in 2018 with a new government on board and a new set of programs and projects to move forward, we also had to engage in the reform agenda for Angola. We defined a methodology to step forward, assessing and evaluating the quality and the robustness of the system, including ports, airports, railways, and logistics platforms, all of them under our responsibility. One of the main concerns we faced was that we needed a stronger and much more effective regulatory and supervisory bodies. In that regard, we recently approved a new law for the National Civil Aviation Authority (ANAC). In parallel, we are doing exactly the same thing with the maritime and ports authority and the terrestrial transportation authority. The main idea is to have the state move toward a more regulatory and supervisory role, instead of being involved directly in the different business activities on the ground. Our second-most important action was putting together the transport and road infrastructure master plan, a 20-year plan for the Angolan transport sector. The main objectives of the plan, in terms of the future of the country, are continuous investments and upgrades in infrastructure in the transport sector and logistic services and in terms of road infrastructure.

What are the ministry’s plans to improve Angola’s logistic platforms and trade logistics?

There were two main issues: moving Angola up the ladder of compliance in terms of international standards and procedures; and determining the future of the country and how we see Angola moving forward, so we can also benefit from the interest of international investors and business community to support the strategy. We are facing the challenge of extending our program in two ways, of which one is putting together a number of tenders for concessions. We are convincing the international community and the global big players to come in and operate the Angolan infrastructure. We are doing this in ports, as well as in other sub-sectors like the tender for the Lobito corridor railway infrastructure. We did that in Luanda, and the next steps are Cabinda and Soyo. We need investments to improve the quality of service, efficiency, operational readiness, security and safety levels. In Luanda, we were able to attract one of the main terminal operators in the world, DP World, which will join APTM as operators of the two main terminals in Luanda Port. For the Lobito Port, a multipurpose terminal tender, we have seven contenders, and all of them are among the top 10 global terminal managers. The second way is to privatize some of our strategic and critical companies in those sub-sectors. In the civil aviation sector, for instance, we decided to split our former airports management company and navigation company ENANA into two companies. One is a public entity that is now responsible for air traffic control and navigation, ENNA-EP, and the other is responsible for airport infrastructure and management, SGA-SA.

In a nutshell, what are your objectives for 2022?

First, we need to conclude our reform agenda with the specific purpose of raising our standards and recommended practices, improving the global perception of the Angolan transport sector in terms of awareness, the quality of its institutions, its legal framework, and efficiency. Second, we are focused on improving the quality of urban mobility by introducing a set of measures to not only increase the fleet of urban public transportation but also change the way that people move. The third and final objective is to improve the professional quality of our operations in the various sub-sectors. Underlying these objectives are two important pillars: sustainability of our transport and logistics solutions, and digital transition and innovation.