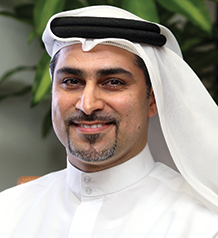 Fahad Al Gergawi began his career in 1994 in the Exhibition Department of the Dubai World Trade Centre. He moved to the Dubai Chamber of Commerce in 1995, and later became the Executive Director for Trade and Industrial Development. Between 2004 and 2008 he worked at Dubai Holding as Executive Director of International Business Development at Dubai Properties Group. He is currently the CEO of Dubai FDI, an agency of the Department of Economic Development in Dubai.

What have been some of the key developments of the past year that have increased the attractiveness of Dubai as an investment destination?

Dubai launched a number of initiatives in 2014 as part of its continuing campaign to enhance the attractiveness of the Emirate as a competitive hub and destination in which people from all over the world could live and do business. While many of these initiatives formed part of an ongoing infrastructure expansion, many others were aimed at integrating progressive and sustainable policies in line with international best practices and the country’s general emphasis on innovation. From an FDI perspective, there were four particular initiatives that stood out. The first was the launch of a new innovation program by TECOM, with an overall investment of $1.23 billion. The fund is planned to support the Dubai Internet City and the newly-launched Dubai Design District (D3). Dubai Internet City’s innovation hub will provide 1.6 million sqf of dedicated space to around 15,000 creative workers, while the Dubai Design District will provide an inspiring and dynamic destination of over 1 million sqf for emerging designers and artists, thereby attracting designers and entrepreneurs to set up in Dubai as a gateway to the region. Second, the launch of the MENA’s first Google for Entrepreneurs Tech Hub at AstroLabs Dubai, is intended welcome tech entrepreneurs from across the globe seeking to access high-growth emerging markets. The hub is meant to boost innovation and entrepreneurship in Dubai in the IT sector. Third, the Smart City initiative, aimed at transforming Dubai into one of the smartest cities in the world, one in which end-users will have access to innovative services. The initiative will allow 24/7 access to government services remotely, which in turn will improve ease of doing business in the city. Fourth, the Dubai 2021 plan, with focus on the human aspect of Dubai’s growth. The plan will help position the Emirate as a preferred investment destination with a substantial human capital capable of leading Dubai into the future. In addition to these new initiatives, significant milestones have been achieved toward improving cooperation between the public and private sectors, in order to enhance Dubai’s appeal as a business hub. The doubling of the capacity of the Mohammed bin Rashid Al Maktoum Solar Park to 200 MW, combined with the commissioning of the Dubai Tram project, were milestones in Dubai’s ongoing efforts to improve energy security and infrastructure. The year has also allowed the real estate sector to stabilize after improved regulations addressed investor concerns and financial markets bounced back, indicating maturity and an improved confidence in Dubai’s business environment.

How do you expect the establishment of the Al Etihad Credit Bureau to impact investment within Dubai?

Collecting credit data about individuals and companies is vital for improving transparency, as well as helping lending institutions make informed decisions and encouraging them to finance bigger projects and individuals. This will result in further stimulation to the economy. The credit bureau will also allow the monitoring and regulation of lending practices, which will help organize and add stability to the financial sector.

It was recently announced that Dubai is to build a $1 billion financial zone in the heart of downtown. What does this say about the Emirate’s commitment to providing the facilities and infrastructure necessary to become a leading global financial hub?

The joint venture between Dubai’s sovereign wealth fund (the Investment Corporation of Dubai), and the Canadian Asset manager Brookfield is a vote of confidence in the stability of the sector, and anticipates future financial growth. The new development will provide world-class operating space for multinational companies that want to capitalize on the anticipated growth prospects associated with Expo 2020.