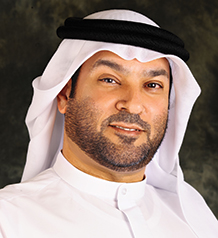 HE Sultan Abdullah bin Hadda Al Suwaidi has been Chairman of the Economic Development Department since 2012. Prior to being appointed Chairman, he served as Secretary General of Sharjah Consultative Council from 1999 to 2012, and Director of Membership Affairs and Transactions at the Sharjah Chamber of Commerce and Industry from 1988 to 1999. Since 2012, he has been a member of the Sharjah Executive Council, the Emirates Standardization Authority Council, and the Economic Coordination and Cooperation Committee. He holds a Bachelor’s of Public Administration/Politics from UAE University in Al Ain.

Share on:
TBY talks to HE Sultan Abdullah bin Hadda Al Suwaidi, Chairman of the Sharjah Economic Development Department (SEDD), on the state of the economy, why investors choose Sharjah, and what to expect in the coming years.

What is your assessment of the current state of Sharjah’s economy, and what strategies have been implemented by the Department to boost economic development?

The economy is going through one of the best periods of economic growth, as reflected by a record GDP growth rate of over 8% in 2014, and a growth in gross fixed capital formation of 6.4% in 2013. On top of that, Sharjah has enjoyed a limited inflation rate of about 4%. Also, it has witnessed high and direct operational spending on labor, which hit a growth rate of 6.5% and consequently achieved significant growth rates in a number of sectors, such as construction, wholesale, and retail, where workers compensation rates rose up to 9.4% and 6.4% respectively. The Department’s annual business indicators reflect Sharjah’s fortuitous economic status; where the new licenses that SEDD issued in 2014 increased by 6.3%, and license renewals grew by 6.4% compared to 2013. Furthermore, the number of new enterprises that were established increased by 5% due to the fact that more industries have started to conduct business in Sharjah throughout 2014. Additionally, commercial enterprises grew by 7.9%. SEDD looks at local indicators as well as the growth of licenses through an integrated perspective that enables sustainable development in economic, social, and environmental terms. Also, it works on developing the economic performance by improving its services, encouraging investment, and applying initiatives to save investors’ time and reduce their costs in accordance with the World Bank determinants for conducting business. Also, SEDD is concerned with social issues through raising the number of local businesses where it releases “Eitimad” license that enable locals to conduct their business from home, in addition to supporting national and youth enterprises. Furthermore, SEDD is committed to applying requirements for environmental compatibility of Sharjah’s enterprises, and achieving a green economy in the context of attaining sustainable development in the Emirate.

Sharjah’s economic performance and vision to attain economic development require placing efforts in a number of sectors in order to attain a standardized methodology that affects the main sectors positively. As a result, SEDD realizes the importance of collaborating with all economic development partners in the Emirate, not just with SCCI and Shurooq, but also with the consumer, producer, financial institutions, and government agencies, which play crucial roles in the economic development of Sharjah at the local and federal levels. Lately, SEDD turned its focus to create a partnership with Shurooq and SCCI by attending several joint meetings and promoting investment in Sharjah. It has linked its working environment with the investment view of Shurooq and the tools that SCCI holds to communicate with businesses. As such, SEDD completes the economic management triangle at the governmental level where it promotes Shurooq’s vision of investment and supports SCCI’s process in linking products and services with the requirements of the market.

What factors make Sharjah an attractive destination for investment and in which particular sectors of the economy do you see the most significant investment opportunities?

Sharjah enjoys competitive features not only at the local level, but at the regional level as well. The most important aspect of Sharjah is that it has been a family business incubator since the 1970s, which helped in making it an ideal environment for establishing business and enterprises. Sharjah also has a comprehensive educational structure that compliments the economic structure, where it used to have the largest port in the Gulf in Khor Fakkan Port, and the first airport in the region. Sharjah has witnessed significant developments resulting from economic initiatives and projects launched due to the directives of HH Sheikh Dr. Sultan bin Muhammad Al Qasimi, Supreme Council Member and Ruler of Sharjah. The most promising sectors of Sharjah’s economy are utilities, hospitality, transport and logistics, real estate and construction, business services, financial enterprises, government services, as these have reached major growth in 2013. Growth in some sectors is a direct result of increased government spending, such as the utilities sector where rates increased from 1% in 2012 to 12.5% in 2013, the hospitality sector that recorded 3% in 2012 and 9.4% in 2013, as well as government services sector that attained a growth rate of 2% in 2012 and 11.2% in 2013. Such quantum leaps in these sectors drive the need for additional unconventional local and international investment, such as through PPPs between Sharjah’s government and the private sectors.

It is estimated that Sharjah will continue to post strong GDP growth in the years to come. What is your medium- to long-term outlook for the economy of Sharjah, and what are your particular expectations for the coming year?

Sharjah has achieved a compound GDP growth rate of 11% in the past ten years, proving that Sharjah’s economy is sustainable and hasn’t been exposed to structural imbalances, even in the wake of the crisis of 2008. On the contrary, Sharjah reached a GDP growth rate of 4.2% in 2009, and went on to post 8.5% GDP growth in 2014. Based on these growth rates, we expect that the GDP will reach around AED90 billion ($24.5 billion) in 2015. The Emirate’s economy is moving at a steady pace not only in terms of high GDP growth, but also through growth in particular economic sectors. Based on our economic and political analyses, we believe that Sharjah will continue to achieve high growth in the years to come.

What goals have you set for the Department for the next five years?

In the past two years, SEDD paid great attention to organizing infrastructure, developing organizational performance, building capacity, improving the dealing with investors, facilitating its services in Sharjah and surrounding regions, rehabilitating national cadres, and achieving transparency. The Department has implemented an organizational strategy to enable it to guide the economic development in Sharjah. To strengthen this strategy, HH Sheikh Dr. Sultan bin Muhammad Al Qasimi, UAE Supreme Council Member and Ruler of Sharjah called for establishing a Commercial Department and an Industrial Affairs Department at SEDD to focus on the qualitative growth in the main sectors of the Emirate. Also, SEDD has concentrated on implementing a sectorial economic vision that focuses on horizontal geographical development, supporting local businesses, employing local employees from educational institutions, boosting local trading and industrial sectors—especially the wholesale and retail sectors, increasing customer satisfaction by increasing efficiency and saving costs, and developing laws and working conditions in the Emirate. Our aim is to improve the ways of doing business in Sharjah, as well as to monitor and control our markets, to ultimately encourage investment and spending in order to obtain economic growth.