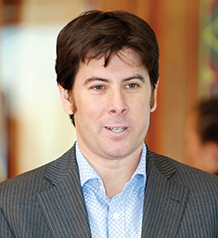 Rising To The Challenge

Mark Smith spent his early career in Scotland and then the Cayman Islands, before leaving for Almaty to join Deloitte’s regional Financial Services audit group in 2007. Since 2012, Mark has been Managing Partner for the Caspian Region. He works with clients in the banking, insurance and manufacturing sectors and has provided audit services under IFRS, US GAAP and UK GAAP. Mark holds a Degree in Accounting and Marketing and is a Chartered Accountant (Scotland).

Share on:
Mark Smith, Managing Partner of Deloitte in Kazakhstan, explains how economic diversification and strong regulations are the key to surviving the global financial crisis.

Kazakhstan faces numerous external challenges such as low oil prices and geopolitical tension in the region, however I believe the economy will be strong enough to weather the storm with minimal losses. The fall in oil prices could actually end up being another catalyst in developing the political will for diversifying the economy. This has already been seen through the government’s introduction of numerous investment incentives and widespread message that Kazakhstan is “open for business.” However, focus really needs to be on those sectors in the high value areas that give the country a competitive advantage on the global markets. As President Nursultan Nazarbayev announced earlier in January, the country is going into “economy mode,” which involves freezing some scheduled construction activities and focusing only on completing ongoing projects.

The President also announced measures to stabilise Kazakhstan’s economy in late 2014 under the Nurly Zhol economic policy, which will be sponsored by funds from the Samruk Kazyna Sovereign Welfare Fund. The policy’s objective is to stimulate the economy through infrastructure investment and by implementing the Kazakhstan-2050 Strategy Development Plan which finances domestic transport, energy, industrial and social infrastructure to the tune of $542.6 million in 2015 and 2016 and $3 billion a year from 2015 to 2017. In addition, investment is also expected from other international organizations, and China, for example, has already contributed construction materials.

Secondly, the country’s first five-year plan for mandated industrial and innovative development proved to be a learning experience, establishing a number of important building blocks on which diversification can now be achieved. Efforts should be focused on niche sectors and those where raw materials are abundant and there is existing demand, such as the service or chemical sectors in the oil and gas industry. One area that warrants further exploration is the potential for agriculture to become a far more important element of the national economy. Even though the levels of commercial farming in Kazakhstan are currently very low, there is no reason why focus cannot be given to farming and agriculture so that the country can compete on a global scale, partially due to its sheer size and favorable investment climate.

Finally, joining the Eurasian Economic Union and strengthening economic ties with other Central Asian countries will play a key role in increasing market scale and overcoming the challenges of geographical location. The size of the country, together with a widely dispersed and relatively small population, make markets harder to access. Membership of the Eurasian Economic Union will further solidify Kazakhstan’s position in the region as a leading economic force, one that is party to many banking initiatives and organizations such as the China-led Shanghai Cooperation Organization. By positioning itself in this way, Kazakhstan is helping to offset any of the economic fallout from the collapsing Russian Ruble and the effects of the sanctions on Russia.

In order to develop in these directions, it is essential that companies investing in the country feel secure that their investment is being safeguarded. In other words, the rule of law is critical in attracting new investment. The government is currently taking steps to address this issue and is looking towards both Dubai and Singapore as international examples of best practice. Further, Kazakhstan has signed bilateral investment treaties with many countries, including OECD countries, guaranteeing national or most-favoured-nation treatment and stipulating the responsibilities of parties, most notably in the event of expropriation. Kazakhstan has also established institutions to promote investment, including KazNexInvest and the Foreign Investors’ Council, and has created an investment ombudsman to help foreign investors address their issues and concerns to the right institution and ultimately ensure a favorable investment climate.
To date, Kazakhstan has made outstanding progress towards creating a favorable investment climate. For example, Kazakhstan was one of the first CIS countries to introduce IFRS, electronic filing, simplified visa procedures, liberalized currency controls and so on. Rightly so, Kazakhstan is widely recognized as having the best investment climate in the Caspian region and if it continues on that path, it should be successful in strengthening its position and reaching its potential of diversifying its economy.