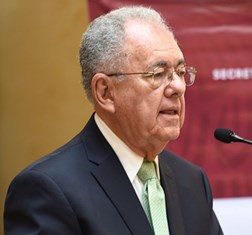 Secretary of Communications and Transportation,

Javier Jiménez Espriú is an electrical mechanical engineer with postgraduate studies from the Conservatoire des Arts et Metiers in Paris. He has held a wide range of positions, such as Member of the Mexican-US Commission for Educational and Cultural Exchange (COMEXUS). He is currently the Secretary of Communications and Transportation.

Share on:
The new administration has major plans for how to spur economic development with investment in transport infrastructure.

During this six-year term, the federal budget in the transportation sector will be slightly higher than MXN600 billion (USD31 million). President Andrés Manuel López Obrador is clear about the idea of stimulating the participation of private initiatives. In 2019, there will be an investment of MXN70 billion (USD3 million), which will be channeled to various road programs, ports, airports, railways, and telecommunications.

The private sector will be invited to invest MXN20-25 for each peso invested from the public budget. This will preserve the state’s control over concessions. We have many infrastructure needs, which is why the government is working on several projects. We are going to reactivate the merchant navy and the roads. The government will participate in the development of the Isthmus of Tehuantepec, which is fundamental for the development of the southeast, as well as in Tren Maya and the paving of 300 roads to municipal capitals.

Work will be carried out on the conservation and maintenance of the transport infrastructure and the continuation of useful works in process. The country is full of half-finished or paused projects, which have stalled for many years. These need to be finished in order to make the resources that have been invested there valuable.
The Secretary of Communications and Transportation stresses that attention will be given to the strain on the International Airport of Mexico City. That airport will be rehabilitated. There will also be a boost for the Toluca airport, which has a capacity of 4 or 5 million passengers. Today, it only moves 600,000 users. A third international terminal will be built in Santa Lucí­a. These terminals will have national and international operations.

Another project to be promoted will be universal broadband internet connectivity. This connectivity will spur the development of new generation communications networks, essential for security, education, public health, culture, and communication.