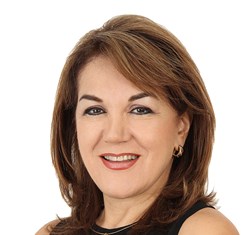 Rocí­o de Dí­az as Director in Ecuador of Plus Ultra Line Airlines leads the local operations in the new market, ensuring quality of service to the Ecuadorian customer. With long experience in the airline and tourism sector, Rocí­o de Dí­az has held high-level positions in multiple areas such as sales, marketing, operations, cargo, airport and general administration. Her outstanding experience includes collaboration with RVD Global Network, Discover the World, GSA Avior Airlines Ecuador, PAWA Dominicana, SBA Airlines Ecuador, AEROPOSTAL Alas de Venezuela in Ecuador, AEROPERU Ecuador, among others. In addition, she has participated in organizations such as the Association of Airline Representatives, the Pichincha Chamber of Tourism and the Tourism Executive Companies Association.

Share on:
“Apart from the capacity of Ecuador to attract visitors, we need to bear in mind Ecuador has a population of 17 million, so the outbound capacity of the country is also attractive for airlines.“

What role did Ecuador’s open skies policy play in Plus Ultra’s decision to open the Madrid-Guayaquil route via Quito?

The policy of open skies adopted by the government has attracted the interest of several international airlines, especially from Anglo-Saxon companies, to come to Ecuador because it has a great deal to offer and has untapped potential. Ecuador is the country of the “four worlds.“ The policy of open skies was a central piece behind the decision of several airlines, including Plus Ultra, to bet on Ecuador. Apart from the capacity of Ecuador to attract visitors, we need to bear in mind Ecuador has a population of 17 million, so the outbound capacity of the country is also attractive for airlines. With our new route, Plus Ultra is now a player driving tourists into Ecuador and positioning Spain in our country. Our motto says we will bring the best of Spain to Ecuador and the best of Ecuador to Spain. We will operate this route three times a week with an Airbus A340 300 with a capacity of 303 passengers.

What is Plus Ultra’s strategy to position its route and differentiate itself from other operators?

Indeed, we will compete in this route against other airlines. However, we have an important differentiating value, which is the passenger service. Plus Ultra seeks to put passenger service back at the core of an airline’s service, not only from the commercial side, but also onboard, in the airport, and during post-sale services. Additionally, we will offer the most competitive flight from Ecuador to Spain, and the flight includes one suitcase for free and up to three pieces of luggage in economy class. In addition, in business class, our seats are flat beds, which guarantee a superior comfort level. Our inaugural flight was on July 12, and we were extremely pleased it was an almost full flight and spaces are quickly filling up. In addition, we are the closest Spanish airline to Latin America. We know well the region and its characteristics, the people and also the distributors. Therefore, will work closely with wholesalers in Ecuador to make sure distribution is done through effective channels. We had 10,000 bookings just in the first two months of commercialization.

What will be the impact on Ecuador’s outbound capacity if nationals are exempted from visa requirements to enter the EU?

One of the factors limiting growth at this time is the requirement of a Schengen visa for Ecuadorians to visit Europe. We are confident the outbound market will see considerable growth if the visa requirements are lifted. After the open skies policy, relaxed visa requirements for Ecuadorians would be the next step to guarantee the viability or expansion of new routes and the arrival of other airlines.

How is Plus Ultra positioned to not only capitalize on potential Spanish tourists to Ecuador, but also European?

At present, we are consolidating the Spain-Ecuador route, though we are quickly moving to sign strategic alliances with other airlines to promote the connection to Ecuador via Spain to the rest of Europe. In this regard, we will benefit from getting the IOSA certification, which will allow us to form alliances worldwide with other airlines. Besides, the Ministry of Tourism of Ecuador’s promotion plans are proving to be effective and provide for close cooperation with airlines.

What are the objectives for the route over its first year operating?

We hope that with all the strategic alliances and the communication plan in place, we will be able to increase the frequency to at least six flights weekly by 2020, and to in order to achieve this objective, a new 340 600 airplane will cover the route. Plus Ultra not only seeks to grow in routes, but also in frequencies. Apart from that, despite being a young airline, Plus Ultra has ambitious plans to become an airline of choice, connecting Spain to Andean countries. We will open a route with Colombia, adding to our flights to Ecuador, Colombia, Venezuela, and Peru.