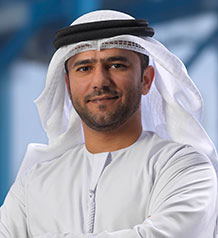 Captain Mohamed Juma Al Shamisi is the CEO of Abu Dhabi Ports and is an experienced maritime executive with more than 18 years of industry experience. He joined the firm in 2008, and is also the Chairman of Kizad Board of Directors and a Board Member of Etihad Airways. He holds an MBA and Graduate Certificate of Management from the University of Tasmania, Australia.

Share on:
"Abu Dhabi Ports is a key enabler of the Emirate's economic diversification."

How vital are the ports in Abu Dhabi with regard to diversifying the economy?

Abu Dhabi Ports is a key enabler of the Emirate’s economic diversification. As the master developer, manager, and operator of the Emirates’ non-oil ports and Khalifa Industrial Zone, our growing YoY business volumes are a testimony to the efficacy of our role in stimulating the trade, logistics, and industrial sectors of Abu Dhabi. A study commissioned by Abu Dhabi Ports and verified by Statistics Centre Abu Dhabi (SCAD) revealed that our company contributed more than AED14 billion to Abu Dhabi’s GDP and generated over 39,500 new direct and indirect job opportunities in 2014. As the maritime trade business enabler, the activities of Abu Dhabi Ports in its entirety accounted for 2.9% of the Emirate’s non-oil GDP, which resulted in rise to nearly 2% of overall employment in Abu Dhabi’s non-oil economy. Our contribution to the expansion of the Emirate’s tourism sector, a major component of its economic diversification, was also significant. Growth in the cruise business generated an estimated value-added contribution to the Abu Dhabi economy of over AED71 million and resulted in the employment of more than 300 people. Khalifa Industrial Zone Abu Dhabi (Kizad), the integrated trade and industrial hub of Abu Dhabi, improved its value-added contribution to AED6.1 billion, and created over 3,600 employment opportunities in 2014. In 2015, a total of 21 Standard Musataha Agreements (SMAs) were signed with national and international investors, and three plot-extension SMAs with existing investors. When these agreements are materialized on the ground, we will see a larger impact on the GDP of Abu Dhabi.

Can you talk about the integration within the industrial zone?

Khalifa Industrial Zone’s (Kizad) integrated design with Khalifa Port has the potential to meet future demands of industrial and logistic sectors in Abu Dhabi. Kizad has created clusters for certain industries together, whose offerings can be mutually beneficial to boost their business. As the products and services offered by an investor are being utilized by others within the cluster, it becomes a circle of value creation. The economies of proximity offer convenient and cost-effective business operations. The aluminum cluster with Emirates Aluminium (EMAL/EGA), our anchor tenant, is an example. EMAL will convey aluminum to other manufacturers in the zone in hot molten form through our innovative Hot Metal Road, transported by specially fitted trucks. This molten aluminum will also be directly used by other industries in the cluster, like TALEX, saving substantial energy and costs of re-melting the aluminum.

In 2015, all RoRo operations were moved from Zayed Port to Khalifa Port, and RoRo has now grown exponentially. How has this developed business?

The growing demand from the automotive sector in the UAE necessitated the relocation of RoRo operations to Khalifa Port from Zayed Port. An enhanced yard and terminal facilities opened the door to increased customer services and provided a strategic location and flexible capacity. This transition to Khalifa Port contributed to a 27% upswing in volumes with 134,272 vehicles in 2015 compared with 106,071 vehicles the previous year. Khalifa Port’s current capacity of about 350,000 vehicles a year will help the port become a regional RoRo hub.

Can you describe how the cruise sector is being enhanced after Zayed Port has been upgraded?

The newly opened Abu Dhabi Cruise Terminal at Zayed Port, a premier cruise hub in the region, has been receiving unprecedented number of passengers. The state-of-the-art terminal’s innovative and efficient mechanism has proved successful in handling a burgeoning number of cruisers, contributed by the homeporting of a global cruise liner, MSC Musica of MSC Cruises, the Switzerland-based global cruise line. This luxury cruise vessel alone will bring in 45,000 of the total 205,000 cruise passengers scheduled to visit Abu Dhabi during the current cruise season ending April. This rise in number of cruisers during this season will represent over 19% growth compared with the previous season, and a five-fold surge since the first cruise season in 2006-2007. This remarkable growth is projected to reach more than 300,000 passengers expected on 130 scheduled ship calls by the 2019-2020 season. As visiting cruise liners demanded more destinations, we started developing Sir Bani Yas Island Beach as the Arabian Gulf’s first cruise beach stopover in Abu Dhabi. The island has been receiving cruise vessels since November 2015 and will be fully operational this year, enhancing Abu Dhabi’s appeal as a leading winter-sun cruise destination.

In 2014, Khalifa Port managed the status of third-fastest growing container port in the world, and fastest growing in the region. How was this achieved?

Khalifa Port achieved 32% growth in container cargo volumes and a 27% upswing in RoRo traffic in 2015 compared with the previous year. Our strategic priority to achieve innovation, the deployment of advanced port technology, and well-planned expansion of infrastructure made this possible. The increased investments in Kizad and favorable economic factors also played a major role. Our significant investment in technology, world-class infrastructure—new ship-to-shore quay cranes, gantry cranes, and automatic stacking cranes—and services have enhanced our customer experience. The implementation of Maqta Gateway, a new purpose-built port community system and Jade’s terminal operating system, the Master Terminal, are expected to further improve our productivity and efficiency. The new productivity records set by Abu Dhabi Terminals also contributed to the growth. Its operations team handled the vessel APL BOSTON with an average gross crane productivity of 39.81 berth moves per hour (BMPH), resulting in berth productivity of 135.18 BMPH during a 19-hour, 54-minute port stay. As part of our constant efforts for efficiency improvement, a 12-minute turnaround time for trucks has raised Khalifa Port’s profile as an international maritime hub. We have introduced a range of new mobile applications and internal services, including an e-Pass service that helps customers submit all of their security details online in advance. Our YoY growth indicates that we have responded well, by enhancing our capacity, to the demands from rising import and export activities in the Emirate. This is a testimony to the strength Abu Dhabi’s economy and plays a positive and vital role in our business. The trans-shipment at Khalifa Port, which has grown drastically thanks to our status as a regional hub, has also been an important driver of growth. High demand for strategic exports from the region, such as aluminum, and continuity in ongoing developmental projects, also catalyze the growth. Khalifa Port also meets the huge demand of services for major infrastructure projects in Abu Dhabi.