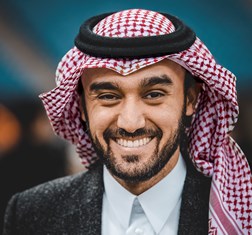 Run for Your Health

Abdulaziz Turki Alfaisal Al Saud was appointed Vice Chairman of the GSA in 2017. His interest in sport started with a passion for auto racing. He started racing as a 21-year-old and has raced in many sporting events throughout the Middle East and Europe, including the 24 Hours of Le Mans, GT Masters, GT3, and Formula BMW. He employs his experience as an athlete to help broaden the sports spectrum in the country. He studied politics at King Saud University and the School of Oriental and African Studies (SOAS) at the University of London.

Share on:
The Saudi government has set out plans to give birth to a sports culture that has long been hindered by hot climate, lack of awareness, and low private-sector participation.

What is your vision to provide both the entertainment element and public health element of sport?

When I started in the GSA, I asked two main questions: How usable and functional are our sport facilities and how accessible are they to the public? It turns out, we have 40-year-old facilities that are in mint condition, as they were hardly used. Our survey in 2015 found that only 13% of male Saudis over the age of 15 practice sports more than half an hour per week. Saudi Arabia has one of the highest per capita figures in the world for obesity and Stage II diabetes, and the latter is directly correlated with activity. We targeted increasing the sports participation ratio to 20% by 2020 and 40% by 2030. A large part of the journey is raising awareness about the risks and benefits at an early age. We developed a national strategy for sports based on three pillars. The first is getting everyone in Saudi involved in our activities and familiar with our facilities. This means sports at all levels, which brings us to the second pillar of building a feeding ground and a talent development system for sports clubs to nurture future champions. The third pillar is the sports economy; we should make it easier for the private sector to come in. Today, around 80-90% of the contributions to the sports sector come from the government, which is not sustainable. To move our objectives forward, we now have the Mass Participation Federation, headed by Princess Reema. Also, we reconstructed our Olympic committee in line with the requirements of the International Olympic Committee. Finally, we have doubled the number of national sports federations from 32 to 64 to help athletes get accredited.

Could you tell us more about the Quality of Life program and the role of GSA?

The program has four pillars: culture, entertainment, and two in sports, meaning GSA owns 50% of the initiative. The first program again focuses on increasing mass participation, with the objective of reaching 40% by 2030, while the second program focuses on better positioning the Kingdom in the international sports arena. To develop this as a continuous system, we need more private sector participation. In the Quality of Life program, we look at how the sports economy can affect the GDP, how to build a conducive ecosystem, and how to create jobs out of it. We benchmarked ourselves against Canada, a country with similar demographics, economic characteristics, and climate challenges. With a similar population, we have around 12,500 people working directly in the sport sector, while Canada has around 300,000 employees. The share in the total GDP is not even measured. From our numbers, it is around 0.07%, compared to around 1% in Canada. The Quality of Life program has 21 initiatives structured around our three main pillars. Within mass participation, two key initiatives are Active Cities and Active People. For this, we will collaborate directly with municipalities and development authorities. When we held a two-day event in Riyadh in November, 11,000 people showed up, indicating there is definitely a platform for this. King Abdullah Sport City in Jeddah now opens every Tuesday for various sporting activities, including for families and women. According to our survey, 80% of participants are convinced that sports makes their lives better. Our job is to get them started and educate them on the possibilities. With 70% of our population under the age of 30, this will catch on quickly.

How do you envision pulling in or encouraging the private sector to participate?

Potential sponsors want exposure and aim to put their budget into something that positively reflects on them. Each year, we have around 3,000 sporting events, which is a great starting point. If demand and visibility of the sports sector increases, the private sector will automatically come in. The private sector wants sustainability and trust, and with our plans we can deliver on these expectations.