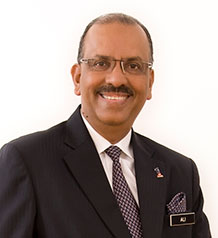 Chief Secretary, the Government of Malaysia

Tan Sri Dr. Ali Hamsa was appointed to his current position in June 2012. He has a Bachelor’s degree from the University of Malaya and continued his studies at Oklahoma State University, where he obtained a Master’s in Economics and later a PhD in Environmental Sciences and Economics. He has had a long public career, with experience at the Ministry of Transport, the Economic Planning Unit, and the Public Private Partnership Unit.

Share on:
"Our aim is to create a civil service that is receptive, responsive, and emphatic."

A well-functioning civil service is vital to achieving economic objectives and driving national development. What measures have been implemented to improve the effectiveness and efficiency of government delivery services?

Among the first measures that I have taken since assuming the role of Chief Secretary in 2012 was to introduce the concept of humanizing the public service, which is in line with the 1Malaysia “People First, Performance Now” concept to create a people-oriented civil service. The concept is based on six guiding principles: openness; going down “on the ground”; engagement; striking a balance between spiritual and physical aspects; camaraderie or a sense of belonging; and collaboration and resource-sharing through Public-Private Partnerships (PPPs) and NGO partnerships. In addition, the efficiency and effectiveness of government services depends on both the hard aspects (facilities, technology, systems and procedures) and soft aspects (human capital) of service delivery. Therefore, it is critical to ensure that civil servants are appropriately remunerated, provided with good career prospects, and equipped with the necessary training to enable them to deliver services that meet and even exceed the expectations of citizens. Moving forward, the improvements in the civil service will focus on the initiatives identified in the Eleventh Malaysia Plan and on further enhancing the efficiency and productivity of the civil service. The citizen and the customer will be placed at the heart of service delivery with the emphasis on speedy execution through innovative and creative approaches, while upholding high standards of integrity. Innovation is an important driver further elevating the roles played by the public service as it creates high value-added services at lower cost. Recognizing the importance of institutionalizing an innovation culture, several key steps that have been taken include the establishment of an Innovation Unit in all government agencies as well as the creation of the Public Sector Innovation Hub as an online repository for innovations and best practices in the public sector. Malaysia’s efforts in innovation have been recognized internationally. Furthermore, under the Malaysian Administrative Modernization and Management Planning Unit (MAMPU), we have developed various ICT initiatives as efforts to enhance public sector service delivery systems and to create a conducive environment for the business sector when dealing with government agencies. MAMPU also continuously helps public sector agencies in revising and reengineering their business processes. As a result of these initiatives, many government services are now available online. As of March 31, 2015, the number of government online services available was 10,802, or 80.52%. The government is also tapping into Open Data initiatives to enhance and publish more datasets on the Malaysia Open Data Portal. By increasing government openness, it will help us to achieve the goal of Digital Malaysia and enable greater participation in decision making by the citizen (e-participation). Big data analytics (BDA) represents a fundamental shift in government decision-making.

How effective has the National Blue Ocean Strategy (NBOS) been so far?

NBOS is an innovative and creative strategy that the government has adopted in delivering touch point services to the people. When we first implemented NBOS in 2009, there was only one initiative involving a few agencies; today, the number has grown to 78 initiatives involving some 80 ministries and agencies nationwide. NBOS has been effective in reducing operational costs. For example, for the NBOS initiative on Police-Military Collaboration, the police force and armed forces share training facilities, as well as conducting joint patrols. Done conventionally, the government would have had to spend $187.7 million over the past five years. Another example is the Community Rehabilitation Program (CRP), whereby petty criminals are rehabilitated, trained, and utilized for productive work in military premises. This saves the government $2.82 million per year in the operational cost of petty offenders. The effectiveness of NBOS can also be assessed through the demand side of the program. For example, the Urban Transformation Centers (UTC) initiative provides services in 10 clusters of most needed government-related services. During the first year of operation in 2013, the UTC received 6.5 million visitors. The cumulative number of visitors to UTC increased to 9.6 million in 2014. As of April 2015, the number of visitors to UTC is recorded at 4.2 million; this shows the ever-increasing demand from the rakyat. For 2015, the government has allocated $130.45 million for the implementation of NBOS programs and activities, out of which $31.68 million has been allocated for establishment and maintenance of UTCs and Mini UTC during 2015. Currently, we have eight UTCs in eight states in Malaysia. The government aims to have at least one UTC in each state. The establishment of UTCs, Mini-UTCs, and Regional Transformation Centers (RTCs) has created momentum of its own. Apart from offering government related services, it helps increase community interaction through community-related activities. The government is continuously disseminating information on NBOS initiatives through the electronic, print, and alternative media to increase public awareness on NBOS.

What role will PPPs play in the Malaysian National Development Strategy (MyNDS)?

The Malaysian Government has established a partnership with the private sector since the inception of the Malaysia Incorporated Policy in the early 1980s. This policy has succeeded in strengthening the partnership between the public and the private sectors in developing the nation. In line with MyNDS measures, PPPs emphasize the need for the private sector to be the front-runner as well as the engine of growth of the economy. The government has also demonstrated a high level of commitment in facilitating PPP initiatives that are open to new ideas and innovation put forward by the private sector. Infrastructure projects listed under the MyNDS, namely highways, will be implemented through PPPs. The Public Private Partnership Unit (UKAS) under the Prime Minister’s Department is a dedicated agency to oversee PPP development, and is responsible to facilitate the process. A conducive environment for investment also means being open and receptive to foreign investment. In this regard, Malaysia’s PPP development policy emphasizes a “balanced approach,” which is increasing the competency and competitiveness of local firms and allowing the involvement of foreign firms in smart partnerships with local firms in areas where Malaysia is yet to have or lacks expertise, such as those involving green technology and high-tech projects such as the High Speed Rail project.

What are your priorities between now and 2020, both as Chief Secretary and as Chairman of PEMUDAH?

My priorities between now and 2020 include ensuring the public service successfully implements the policies, plans, and programs identified under the 11th Malaysia Plan in a smooth and timely manner, guided by the five philosophies of pro-growth, pro-people, pro-business, environment friendly, and emphasis on nation building; effecting continuous improvement and transformation in the public service so as to have a lean, productive, talented, and competent public service that is able meet the rakyat’s needs and expectations through excellent service delivery. Our aim is to create a civil service that is receptive, responsive, and emphatic to the needs of the rakyat in line with the concept of Humanizing the Public Service, while cutting down bureaucratic red-tape to make processes more efficient and effective, thus lowering costs and enhancing the rakyat’s experience when dealing with government services. Finally, I want to utilize NBOS when looking for solutions or coming up with programs to address current needs.