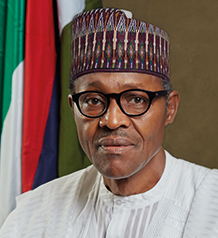 Muhammadu Buhari became President of Nigeria on May 29th, 2015. He joined the Nigerian army in 1961 and was Head of State from December 1983 to August 1985. During this time in office, his government worked to re-balance public finances and strengthen the country’s economy. Muhammadu Buhari gained a Master’s in Strategic Studies from the United States Army War College (USAWC) in 1980, at the rank of Colonel, before becoming General Officer Commanding in August 1980. As the candidate for the All Progressives Party, Muhammadu Buhari won the 2015 presidential election on a platform of anti-corruption and improved security.

Share on:
TBY talks to Muhammadu Buhari, President of Nigeria, on renewing the national political system, the primary goals of his administration, and the broader vision for the country's future.

What drove your decision to run for President again?

I went through the rigors of four presidential elections in 2003, 2007, 2011, and 2015, because I fervently believe in democracy as the best method of governance. I had ruled as a military head of state between 1984 and 1985, but after the collapse of the Soviet Union, I became convinced that democracy was the correct form of government. I joined partisan politics in 2002, and ran for President in 2003. There is no way one can honestly solve major problems in a country without being part of the national decision making process. I ran three times, and thought I won, but the electoral commission said I did not. I challenged these results in the Supreme Court three times, but the judgments went against me. For the fourth time, I ran as part of a coalition. Three major political parties and part of a fourth one came together and formed a formidable party called the All Progressives Congress (APC). We ran, and won the election. To paraphrase the saying, it was fourth time lucky. What kept me going was the conviction that Nigeria can be better administered, and that its resources can be used for the betterment of its people. That is what we have resolved to do now.

Why was the formation of the cabinet delayed?

The cabinet was not constituted until November, and although we were sworn into office in May 2015, there were a lot of changes to be made before we could enter office. Foundations had to be laid for the bureaucracy, for governance, and we needed to chart a new and different direction which emphasized probity, transparency, and accountability. If we had not taken our time to relay the foundation, no enduring change would come. I decided to hold my position in the Ministry of Petroleum, because I have requisite experience in that area, having held the same position in the 1970s under the Olusegun Obasanjo military regime. I believe I have a fair knowledge of the industry, and that I can revitalize the sector once again. In preceding years, the oil sector had become characterized by dishonesty and corruption, with no sense of accountability. It was the country’s cash cow, but now oil prices are down, and I knew that if I was in the position of President, the least I could do would be to utilize my experience for the benefit of the country. There were no legal impediments to taking this dual role.

What have been your greatest achievement in your new role so far?

It is difficult to say what has been our most important accomplishment over the past year. We campaigned on three major platforms, and we have been actively working on these issues during our tenure. We identified national security, providing jobs for unemployed, particularly the youth, and fighting corruption as our core objectives. At this stage we are content with our progress. We are on course, judging by the stated objectives, and we are proceeding with our agenda successfully.

Security is one of our key focuses, and we will never rest on our oars when it comes to making our country safe. In 2016 we will continue to concentrate our attention on this critical task. You cannot govern a country whose borders are not secure, so we will ensure that violent insurgency, particularly in the northeast of the country, is completely subdued, while other forms of criminality like armed robbery, kidnapping, and vandalism of public utilities are prevented. Our security agencies will be funded, trained, and equipped to meet these challenges.

How do you intend to respond to depressed oil prices?

Nigeria has depended on oil as the mainstay of its economy for too long. We paid lip service to the concept of diversifying the economy, but now this has become a matter of great urgency, and requires practical and effective steps for its implementation. With the lowered price of oil on the international market, we must look to other areas if our economy is not to collapse completely. Agriculture and solid minerals are sectors in which we are blessed, and we are poised to harness our potential by appointing highly competent people in these industries. We are giving all the necessary support in the financial and technical spheres, and apart from the self-sufficiency these sectors can give us as a country, they also have the capacity of taking hundreds of thousands of young people out of unemployment. We have our priorities clearly laid out, and we shall achieve them.

What is your outlook for the future of Nigeria?

The future is in the hands of God, but we believe He will help us to bring enduring change to our country. In the years ahead, we look forward to creating a more prosperous Nigeria, one in which corruption no longer holds sway and people are happy and affluent. We want a country where the resources of the land are used for the good of the people, one which can hold its head up high in the comity of nations. We will get there, because we trust in God. We will do our part, and the divine powers will also help us.