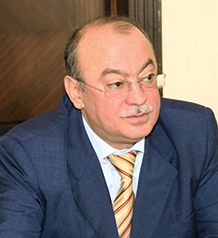 Born in 1961, HE Col-Gen Kamaladdin Heydarov studied geology and international law and began his career at Caspneftegazgeofizrazvedka, a geophysical trust where he held various positions between 1978 and 1988. Having headed different public and private organizations in the period between 1988 and 1995, he was appointed as the Chairman of the State Customs Committee of the Azerbaijan Republic in 1995, receiving the rank of Colonel-General of the Customs Service on January 17, 2002. On February 6, 2006, he was appointed Minister of Emergency Situations. Kamaladdin Heydarov has been the President of the Azerbaijan Taekwondo Federation since December 27, 1999 and the President of the Azerbaijan Boxing Federation since January 23, 2009. On April 12, 2005, he was elected Vice-President of the World Taekwondo Federation.

What particularly important projects has the Ministry of Emergency Situations worked on over the last year?

Overall, 2014 was a successful year, especially in regard to two projects that were implemented. As part of the EU’s twinning program launched in January 2013, the State Agency for the Regulation of Nuclear and Radiological Activity successfully completed the Strengthening and Development of Radiation Safety Infrastructure in the Republic of Azerbaijan project together with the Radiation Protection Center and the Project Management Agency of Lithuania. The objective is to develop a radiation safety culture, as well as develop infrastructure and support services. The project covers tightening control over the impact of ionizing radiation and aims to prepare Azerbaijan for radiological emergency situations. A draft national plan on radiation safety has been prepared, the national laws analyzed and aligned with modern requirements, and state supervision reinforced. The national system of measurement standards were developed in line with European and international standards, the system of preparedness for nuclear and radiological emergencies enhanced, radiation safety laboratories established, and training facilities were established. Representatives of the State Agency for the Regulation of Nuclear and Radiological Activity and of the Radiation Protection Center of Lithuania have exchanged visits to familiarize themselves with their respective systems of nuclear and radiological control. The draft law on radiation and nuclear safety and the related presidential decree are in line with European guidelines and the standards of the International Atomic Energy Agency. In addition, emergency response measures and a simulation of the explosion of a dirty bomb at an airport counter training have been organized. Work has started on supporting the transition of the State Agency for Monitoring Safety in Construction to European standards. The objective is to adopt best practices, improve construction safety and quality, and assist the State Agency for Monitoring Safety in Construction. Implemented in conjunction with the German Institute of Construction Technologies (DIBt) and Latvian experts, this project consists of three components and 20 activity directions. A group of foreign experts came to Azerbaijan to analyze national construction laws and exchange views on a variety of issues. Agency staff have familiarized themselves with the standardization systems of Germany, including testing building materials and construction technologies. European experts have extensively analyzed the needs of the national construction legislation while Latvian specialists have made presentations on the country’s experience in the transition from Soviet to European construction systems. As a result, a set of recommendations was prepared regarding the adoption of European construction standards. This twinning program is designed for 18 months and will last until the end of 2015. Since it is the first such project related to the country’s construction sector, it looks promising.

What measures is the Ministry of Emergency Situations taking to address the threat of natural disasters in Azerbaijan?

Azerbaijan is located in an area prone to various natural disasters, including mudslides and floods, which the Ministry of Emergency Situations is taking different measures to prevent. The Ministry cooperates with Deltares and Royal Haskoning from the Netherlands to evaluate the reliability of protection dams in the lower reaches of the Kura and Araz rivers, and identifying high-risk riverbed zones. The operating schedule of the Mingachevir Reservoir has been aligned with watercourses in the lower reaches of the river. We have finished evaluating the morphology of the Kura river mouth and banks, identified places of initial dredging activities, and started hands-on work. Bathymetry and dredging work is currently under way in Salyan and Neftchala Districts. We are working at around 30 locations using specialized research vessels and suction dredgers in addition to a quayside berth that has been established to enable mooring of said vessels. In order to improve the efficient response to river floods, timely acquisition of information on water levels and flow, and the existing hydrometric network, 12 Diver and Baro automatic groundwater data loggers have been installed along the Kura, Araz, Tartar, and Garasu rivers. A short-term action plan has been prepared to prevent the Kura and Araz rivers from bursting their banks. In order to improve the environmental situation of lakes and bodies of water on the Absheron Peninsula and control water levels and water flows, work has been carried out to determine the geological, hydrogeological, hydrological, morphometric, and hydrographic characteristics of lakes and artificial bodies of water on the peninsula. We have worked to conduct reclamation of artificial lakes clean and preserve natural lakes, establish a distance warning system in flood-risk zones, and prepare comprehensive preventive activities. The Ministry has engaged specialists of Deltares and Royal Haskoning and established a working group to prepare a plan of preemptive action.

How would you evaluate the crisis management situation in Azerbaijan?

Crisis management is critical and the main objectives are to conduct emergency rescues, manage resources and facilities, and analyze information effectively. Due to the fact that the concept of crisis management is relatively new to Azerbaijan, a Crisis Management Center has been operating since the Ministry was established, and we have benefited from experienced countries to create a model suitable for the local environment. When inaugurating a new office building of the Ministry in 2008, President HE Ilham Aliyev reviewed the Crisis Management Center and praised the center’s innovations in the area of prevention and rapid response to emergency situations. Such an evaluation represents a good series of guidelines for our future activities. The Command Room of the Crisis Management Center is operational at every hour of the day and responds to any situation in Azerbaijan. The Crisis Management Room manages large-scale crises in cooperation with local authorities. Operating in four shifts on a round-the-clock basis, the Center follows the action plan on the prevention and elimination of the consequences of emergency situations agreed between the Ministry of Emergency Situations, other bodies of executive authority and local governments. In accordance with a Presidential decree, the “112″ hotline was created and a rapid reaction force of the Crisis Management Center put in place. “112″ has become a lifeline for people seeking help in difficult situations, receiving an average of 10,000-15,000 calls a day in Azerbaijan. Currently, the Center maintains wire and radio communication with the Ministry, back-up satellite communication with emergency rescue teams, a video conferencing system, a system of navigation, various electronic facilities based on the geographic data system, a mobile communication public warning system, computer software to automate daily operation of various departments of the Ministry, video surveillance cameras, and management systems in densely populated and strategically important areas. The Crisis Management Center cooperates with similar centers of other countries and international organizations to facilitate a regular exchange of opinions.

What is the role of the Ministry in the preparations for the first European Games?

The prospect of the first European Games in Baku fills every Azerbaijani with great pride. Our most important objective is to ensure the security of all sportsmen and visitors during the Games, and the Ministry is taking a series of measures to ensure this. Serious attention is being paid to fire and construction safety standards during the construction of all facilities and all facilities are subject to rigorous control and testing, with immediate measures being taken to eliminate any shortcomings. Relevant departments prepare emergency evacuation plans in the areas of radiation and chemical safety and conduct various trainings on the application of such plans. To enable a prompt response to potential emergency situations, attention is being paid to the layout of emergency rescue resources. We intend to set up a command center to control all of the Ministry’s resources and facilities from a single point. In an effort to establish close cooperation with the Organizing Committee of the 2015 Baku Games, a workgroup comprised of representatives of various departments of the Ministry has been set up and a permanent mediator appointed. I am confident that the safety of people during the Baku 2015 European Games will be provided at the highest possible level.