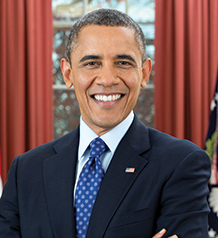 Barack Obama was born in Hawaii in 1961 and attended law school, becoming the first African-American president of the Harvard Law Review. He later returned to Chicago to teach Constitutional Law at the University of Chicago. Later, in the Illinois State Senate, he passed the first major ethics reform in 25 years, cut taxes for working families, and expanded healthcare for children and their parents. As a US Senator, he reached across the aisle to pass ground-breaking lobbying reform, lock up the world’s most dangerous weapons, and bring transparency to government by putting federal spending online. He was elected President of the US in 2008, and sworn in on January 20, 2009.

Share on:
Barack Obama, President of the United States, on nuclear security and Kazakhstan's efforts at the international level.

Twenty years ago, Kazakhstan made a decision not to have nuclear weapons. And not only has that led to growth and prosperity in President Nazarbayev’s own country, but he has been a model in efforts around the world to eliminate nuclear materials that could fall into the wrong hands. So I very much appreciate President Nazarbayev’s leadership. The United States of America really appreciates the outstanding effort to deal with nuclear materials that were carried over from the Soviet era. Working with Russia and the US, Kazakhstan has been able to secure those materials, and that makes us all safer.

During a bilateral meeting held in Korea back in 2012, we discussed some of the other efforts that Kazakhstan has made when it comes to highly enriched uranium, plutonium, including its efforts at helping to develop an international fuel bank that can lessen the need for countries to pursue their own enrichment capabilities. So across the board, Kazakhstan has been a key leader on these issues.

The United States of America will continue to partner with the Republic of Kazakhstan to strengthen its joint efforts to prevent illicit trafficking in nuclear and radiological materials, confirming a shared commitment to non-proliferation and strengthening nuclear security.

The United States of America welcomes the Republic of Kazakhstan’s activities to strengthen nuclear security and implement decisions of the Washington and Seoul Nuclear Security Summits, including by converting the VVR-K research reactor at the Institute of Nuclear Physics (INP) to low enriched uranium (LEU) fuel, down blending the INP’s highly enriched uranium (HEU) material and removing the HEU spent fuel from the reactor. The US and Kazakhstan will continue to work together to convert Kazakhstan’s remaining HEU reactors to LEU fuel and eliminate all remaining HEU research reactor fuel as soon as technically feasible. We support the efforts of the Republic of Kazakhstan to host the IAEA LEU Bank, establish a Regional Nuclear Security Training Center, and strengthen its emergency preparedness, response, and mitigation capabilities.

The close relationship between our two countries extends beyond just the nuclear security issue. We obviously have commercial ties as well. I am always interested in discussing with the President efforts to further expand democracy and human rights within Kazakhstan, which will help to lead to further growth and prosperity in the future.

And so I very much appreciate his leadership and his efforts. And I look forward to continuing to strengthen the relationship between our two countries.