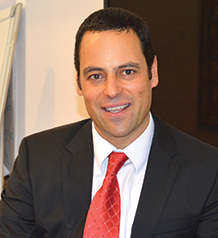 Alex Segura-Ubiergo was born in Barcelona, Spain, and studied economics and political science at the Universitat Autónoma de Barcelona before completing a PhD in political economy at Columbia University in the US. He joined the IMF in 2001, and has held several positions within the organization since then, including Head of Mission to Ecuador, Senior Economist in Brazil, and Deputy Division chief in the Fiscal Affairs Department. He has served in his current position for 18 months.

As Christine Lagarde pointed out at the Africa Rising conference in Maputo in 2014, Mozambique’s growth needs to become more sustainable and inclusive. What are the IMF’s recommendations for achieving this?

Mozambique has been recording impressive growth, reaching an average of 7.5% to 8% over the past 20 years. While this is impressive, to achieve structural transformation, the country will need to sustain these levels over a period of 50 years, as two decades is not sufficient to achieve solid development. Growth will also have to be more inclusive. First of all, eighty percent of jobs in Mozambique are generated in the agricultural sector. Hence, it is difficult to foster inclusive growth without improvements in that sector’s productivity. Secondly, despite the fact that Mozambique has done much to improve the domestic business environment, there is still excessive red tape to contend with, and it remains costly to set up a business. Efforts to improve the business environment must include better enforceability of contracts, and more simplified and transparent administrative systems. Another pillar of inclusive development is financial inclusion. The fact is that 75% of the population still lacks access to any form of credit. It is difficult for citizens and entrepreneurs to implement their ideas if they lack access to financing. Finally, as there will always be citizens who are unemployed, or else underprivileged or handicapped, social policy must protect those that cannot sustain themselves in the market system.

The natural resources boom can be a source of growth, but also has the potential to jeopardize the economy. What are your recommendations for avoiding “Dutch disease”?

There are two critical issues. The first is the importance of gradualism. If the country starts spending resources too quickly, this will generate distortions in the economy. There will be inflation, the exchange rate will appreciate, and those resources will generate unintended negative consequences. The second issue is that the country needs to be careful to strengthen the institutions that will provide and prepare investment projects. Projects financed with resource revenues should help transform wealth on the ground into other assets such as infrastructure or human capital. The other critical idea is to introduce a fiscal rule to help smooth out volatility. This means that the country could establish a sovereign wealth fund or sovereign development fund, in which to save a percentage of revenues to stabilize the budget in the event of a major drop in oil or gas prices in the future, as we are observing now.

How can public-private partnerships meet increasing demand for access to electricity in Mozambique?

Electricity is an area in which Mozambique can make a major contribution with its significant hydropower potential, and also through the use of natural gas. Public-private partnerships are crucial instruments for increasing infrastructure investment in Mozambique. The energy sector is a prime example of where cooperation between the public and private sectors is important, but public-private partnerships are also based on complex contracts and can become a source of fiscal risk. Mozambique will have to increase its capacity to deal with PPPs, including by hiring a new group of qualified experts in this area and more frequent use of international consultants.

What is your ten-year outlook for Mozambique?

Mozambique is one of the few countries in Africa that is booming. It has tremendous potential thanks to its geographic position, resources, and a history of prudent macroeconomic policy management over the past decade. There are also some considerable challenges. For example, up to 43% of the country’s population suffers from chronic malnutrition, and infrastructure gaps are enormous, and so it needs to step up efforts to deal with some of these weaknesses. A focus on growth, financial inclusion, infrastructure investment, effective natural resource management, and social development can make a difference. While it is not easy to find practical ideas to overcome these challenges, I remain optimistic that Mozambique can succeed.