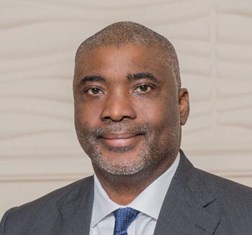 Segun Adebutu is a Nigerian visionary, business magnate and philanthropist whose vision to create an African world-class conglomerate has seen him invest immensely in Oil and Gas, Mining, Infrastructure, Construction, Telecommunications and Entertainment across Africa. He started trading in oil and gas in 2004 until his most notable investment in a Mega Oil City in Ogun State. Adebutu sits on the board of various blue-chip companies including Oladiran Engineering, Trade Nigeria Limited, Bluebridge Marine, music record label Baseline Records, and Petrolex, a diversified energy-services organisation providing value-added services in supply and distribution of petroleum products, used oil recovery, fleet/fuel management, shipping and logistics.
Adebutu is the founder and chairman of Oladiran Engineering and Trade Foundation, a no-profit, non-political organisation committed to supporting orphans and vulnerable children through access to “quality education, primary healthcare, nutrition as well as social and economic welfare.“ He is also an Executive Director at Premier Lotto Nigeria Limited. He studied Economics at the prestigious University of Ibadan.

Share on:
“It was a matter of being ready to transform Nigeria.“

Petrolex was founded in 2007, but only came under the spotlight in 2015 when you made announcements for major projects. What was the reason behind this?

It was a matter of being ready to transform Nigeria. The company prioritizes organic growth; after spotting an opportunity during my late 20s, I started trading small batches of petroleum products, which powered electrical generators in homes and industries across Nigeria. After facing congestion and distribution issues during the initial stages, I concluded that there is a need to create a company in order to solve the issues at hand. At that time, Storage and Distribution (S&D) seemed to be the best area to evolve into, and also the easiest in terms of capital. I had a eureka moment around eight years ago when I found the ideal place to set up an S&D facility in Ibafo, which is on the border between Ogun and Lagos. After setting the foundation, I started real estate acquisition in 2010 and block construction in 2013; the company received its first cargo in 2Q2018. Equally important, we were able to acquire a refinery license. At present, we have a depot with a total capacity of for 200 million liters, which is the largest depot for petroleum products in Sub-Saharan Africa.

Can tell us more about your tank, which PWC valued at USD330 million, and how did you finance the investment?

Notably, there was a revised valuation which is now worth more than USD400 million. The key ingredient that went into financing it was sheer hard work. While we did raise some funds from local banks because of a debt-equity split, the majority of the funds were generated internally, and, therefore, it took five-eight years to develop the resources. Our plan it to reinvest our profits in the business so the company can grow in size and launch an IPO.

What is the comparative advantage of your tank versus the existing ones in the country? Can you charge a premium for providing an alternative to the Apapa congestion?

Our tank’s storage capacity is about 60% of the competition’s combined capacity. Economies of scale set in, and it is perfectly suited for overcoming traditional deficiencies in the market in a profitable manner. Congestion and challenges in terms of loading and offloading in Apapa push the average turnaround for a tanker to around three days, whereas in Ibafo, it is about three hours. Eventually, we want our business to sell itself, and at the right time we will open the premium, but since we recently entered the market, we must be competitive, even if that means giving up an apparent income stream to attract business. In a year’s time, when we have a fuller balance sheet, we can explore other income streams to hit optimum capacity. At present, we are handling 30,000-60,000 tons every four-six weeks, but we have the capacity to turn around twice the storage capacity of 300 million liters.

The success of your tank partly stems from the failure of Apapa, as you provide an alternative route for your petroleum products. If the situation in Apapa was dramatically improved, would that impact your business model?

There is an average of 3,000 trucks that use the facilities in Apapa, so if we capture even 10-20% share of the market, congestion will be reduced by 300-600 trucks in Apapa. Even if the situation in Apapa is dramatically improved in 10 years’ time, we will be able to maintain our edge through improved efficiencies and growing demand.

What is the funding model for the LPG plant and fertilizer plant?

We keep our books clean and professional because our end goal is to go public. To that end, we are entering into strategic partnerships with companies; various groups have approached us to buy into our existing facilities. While we are ready to form partnerships in some branches of our business, we want to keep those operations separate that are projected to grow massively over the next five years.

Can you tell us more about the refinery?

I have a refinery license for 250,000 barrels, but I do not plant to rollout 250,000 all at once. It is easier and less costly to develop in stages as its possible to expand through profits. This is why our first phase is only limited to 20,000 barrels while our second phase will double the number of barrels. Thereafter, we will reinvest profits and reach our target of 250,000 barrels. All the refineries in Nigeria are government owned and since ours is the first privately-owned refinery, we must approach the business with a certain level of caution.

Why is there such little activity in the refining space?

The biggest reason is that operating a refinery is a long-term investment. At the same time, since local banks require yearly ROI, it is difficult to arrange finances. Anywhere between three-seven years are required for a refinery to generate healthy cash flow and the majority of Nigerians are looking for quicker returns.

When do you think Nigeria can achieve self-sufficiency in refining products?

There is a possibility to develop local refining capability that can provide for the Nigerian fuel demand. There are sectors of the economy that are untapped, such as oil sands, mineral, lithium. Such targets take time and it will be at least four years until we reach bankable feasibility. For a long time, Nigeria has been an import-based country, it will take time to change this culture, but we can achieve it through a collective effort. The only way to achieve this is through long-term infrastructure that provides for the development of an internal market.

What do you expect for Petrolex in 2019?

The first phase of the refinery, which is essentially the storage tank, will take time and resources. We have a lot on our plate for the coming year, and we are confident and optimistic.