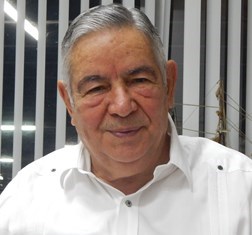 Haralambos Tzanetatos was born in Kefalonia, Greece but migrated to Panama in 1950 after World War II to build a better future. He started his career as a trader in 1954 and four years later, he founded H. Tzanetatos, a company that is a recognizable force in the world of national commerce. Apart from that, he has been involved projects such as Plaza Ágora Transí­stmica, Plaza Ágora Chanis y Plaza Colón Cuatro Altos, and other real estate projects including Edificio Zeus and Edificio Macedonia y Edificio Brisa Marina. Since 1978, he has been serving as the General Consul of Greece in the Republic of Panama.

How has the company evolved over its 50-year history in Panama, and what have been some of its achievements?

It has not been easy; however, hard work pays off. For example, we established a factory that produces butter processed cheese, currently the leading cheese brand in Panama. Previously, the butter was imported directly and had to be stored, transported, and refrigerated. This raised costs significantly, but over time our Australian partners found a way to store it in a 55-gallon tank that did not require refrigeration. When exported, it does not need refrigeration, and when it reaches Panama, we just need to add water. We entered that business several years ago and have done extremely well; to date, no one else is doing this; we produce and export butter for everyone else. Before we adopted the non-refrigeration way, producing butter resulted in a lot of taxes, around USD0.10 per pound. At the same time, we chose not to raise prices because of a potential decline in sales. We have been able to surpass Nestlé and are currently number one in terms of cheese sales across Panama.

Tzanetatos works with several segments such as food, personal care, cosmetics, household, and automotive. What is the company’s core activity?

We started in the food segment but over time we have ventured into other areas such as real estate development. We have constructed several buildings, including a commercial mall in Colón and a 40-storey apartment building in Costa del Este with two 400-sqm apartments per floor. The company still owns 10% of the mall in Colón with prominent developers as minority partners. As developers, we have seen an increase in demand for small 70-sqm apartments in buildings with shopping centers on the ground floors and apartments on the upper floors. We have 3ha of land available and want to build two buildings with a green zone in the middle along with various facilities such as restaurants and pedestrian areas.

How has Tzanetatos contributed to Panama’s socioeconomic development?

Tzanetatos Group’s contribution can be summarized in its primary belief in making a better society for all. For example, I purchased a house with 20 rooms, 42 beds, and a small chapel so that mothers from outside the city who bring their children to the children’s hospital have a place to sleep. Also, we developed a blood bank for a hospital. With the same purpose in mind, we built a school called Instituto Atenea for Panamanian students; those who completed seventh grade are sent to Athens, where the group owns a hotel. On top of providing accommodation, we also help the students with flight tickets. Another such contribution is our collaboration with Irma Lourdes, a hospital that is spread across 30,000sqm.

What are your goals and priorities for 2018?

We pay a great deal of attention to the developments surrounding the next year’s general election. Entrepreneurs and companies must play their roles in social responsibility. To that end, I have purchased a 3,000-sqm plot for a project with commercial premises on the ground floor and an amusement area for young people on the upper floor. The project is based in Chorrillo, a low-income area stricken by crime. The plan also includes a dining room for up to 50 children who will be supported with rental income for life. Those with the ability and resources have to create opportunities for a better living in order to have better citizens who will strive toward a more prosperous Panama.