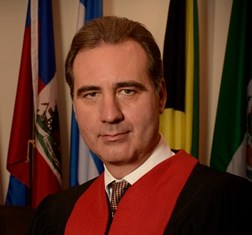 Share on:
Costa Rica is the go-to country for international institutions looking to set up base in the Americas because of its vocation for peace and commitment to human rights, democracy, and environmental sustainability.

Costa Rica has been and remains a country that stands out for its vocation for peace and for having a strong tradition of commitment to human rights, democracy, and environmental sustainability, which is why it is considered the oldest and most stable democracy in Latin America. It is a nation that lives in peace because only then can justice be clearly imparted and the importance of what human dignity means is fully understood. In addition, Costa Rica has historically been a regional benchmark for political stability and social advancement, making it one of the main driving forces for the peoples of the Americas to join forces, especially in these difficult times, to strengthen democracies and multiculturalism, all for the common good and sustainable development around peace, equality, and respect for all.

Why is Costa Rica chosen as a base for many international institutions?

The solid democratic tradition that characterizes Costa Rica and its commitment to the full validity of human rights have endowed this country with a unique stability. We cannot forget that already in 1908, Costa Rica had one of the great honors in the field of law as the seat of the Central American Court of Justice, the first permanent court of international law in history. 70 years later, in 1978, Costa Rica again became the seat of another international tribunal: IACHR. Through its innumerable actions, Costa Rica has shown the unrestricted endorsement of this High Court of the Americas, in addition to its tradition and vocation for the full recognition of the institutions, procedures, and mechanisms related to the peaceful resolution of conflicts and disputes.

Costa Rica has consistently been a promoter of ongoing instruments and proposals for human rights and sustainable development. What can other countries learn from it?

Regarding human rights, democracy, and sustainable development, Costa Rica has been and is a reference point in the region. In addition, Costa Rica has positioned itself internationally as a firm and constant promoter of mechanisms and legal tools for improvement, both in relations between states and between states and their citizens. We must remember that Costa Rica was the first country to ratify the American Convention on Human Rights and to recognize the contentious jurisdiction of the IACHR. The above perfectly reflects the moral conscience of a country that took these significant steps at a time when human rights as a limit and guide for action by states were the fruit of intense and complex debates. When the IACHR began its journey, then-President Rodrigo Carazo Odio was able to say: “Today is a historic day for the American continent.” In this way, Costa Rica became an unquestionable reference of the commitment that all states must assume the full validity of human rights in Americas, provoking the formation and convergence of thoughts that pursued this laudable goal. It should also be noted that Costa Rica became the first country in the world to sign a national pact for compliance with sustainable development goals, all in line with its strong position of defending human rights and social welfare.

Based in Costa Rica, IACHR attracts people from across the region seeking protection against possible human rights. What is Costa Rica’s influence as the seat of IACHR?

Undoubtedly, the installation of IACHR was another testimony to the strong attachment felt by the people of America for the cause of the rights and freedoms of human beings. Specifying a little more in the history of the IACHR, I must point out that in 1969, Costa Rica hosted the extraordinary conference that saw the birth of the American Convention on Human Rights, all under the presidency of then-chancellor Fernando Lara Bustamante.