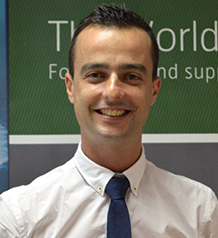 Alexandre Franco was born in Portugal. He studied marketing and publicity at Instituto de Artes Visuais, Design e Marketing (IADE) in Lisbon. He joined Transitex in 2002 and was in charge of the Valencia Branch in 2012. He arrived in Mozambique almost two years ago where he is Managing Director.

Share on:
TBY talks to Alexandre Franco, Managing Director of Transitex Moçambique, on setting up in the country, cargo volumes, and plans for the coming decade.

When did Transitex arrive in Mozambique and how has it evolved since then?

We were established in Mozambique in 2009, starting in Maputo, and over those five years, have already expanded to new branches in Beira and Nacala. Today we have three branches in Mozambique, and also have a presence on the main borders of the country.

What is the significance of the Mozambican market for your company?

It is highly important as Mozambique enjoys commercial relationships with Portugal, Spain, and Italy, where we have our offices. This enables us to offer our clients door-to-door services.

What are your expansion and development plans?

Our plan for 2015 is to open an office in Pemba because we already have some business and our own people present there. We would like to capitalize on the opportunities of the oil and gas industry, perhaps as an auxiliary company to render customs and related issues easier. We offer a full service from door-to-door. In Mozambique, we operate at all the ports and airports—Nacala, Nampula, Beira, Pemba, Quelimane, and Maputo.

How would you describe the growth of the company over the past year?

We are moving 2,500 TEUs a year, although the volume has been growing over the past years. In terms of airfreight, we grew 25% YoY and in sea freight, we 10%. In land transportation from South Africa, for example, we also grew 12%, and expect further growth. We are negotiating some new projects and anticipate sustained growth next year. We will be pursuing additional business from Zimbabwe, Malawi, and South Africa, using Mozambican ports (mainly Maputo and Beira) to ship those cargos to other countries. Also, we will be thinking about new warehousing in Nacala and elsewhere. Importing cargo will be crucial for 2015. We are trying to enter the fertilizer sector in Malawi. There is a huge amount of cargo coming through Mozambique and going to all those other countries that do not have direct connection to the ocean. We have been doing normal cargos, containers and projects, but next year, our main plan is to capitalize on geostrategic location to promote using Mozambican ports to put cargo into other countries. Mozambique will be used to improve the hinterland. Most of the cargo that goes to Zimbabwe and Malawi use Beira Port, so we need to capitalize on clients in Zimbabwe and Malawi and promote this port. There is much happening there.

What are the main countries conducting international trade with Mozambique?

Those are South Africa, Portugal, Spain, Italy, and China. We have noticed considerable growth in the cargo from Italy and China and last year, we opened two offices in Italy and this year we will open a Shanghai office.

What is your 10-year outlook for the future of the company?

Transitex has grown, not just in Mozambique. We are trying to expand Transitex to some countries here in Africa and in South America. We are supposed to increase our business in Mozambique, and also globally, by at least 15% this year. It is hard work, but achievable. Currently, our overall African operations represent 25% of total global operations and we are aiming to lift this to 30% in 2015. We opened in Angola and we have a new branch manager there. We hope that we will grow very fast in Angola. We already have a number of business and partnerships established there.