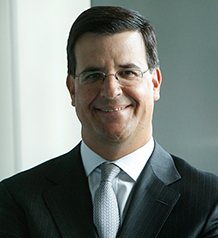 Christian Laub is Chairman of the Board of the Lima Stock Exchange and General Manager (CEO) of Capital Credicorp, Credicorp’s Investment Banking Group. Previously he was responsible for the Corporate Banking Division of Banco de Crédito del Peru.

Share on:
TBY talks to Christian Laub, General Manager of Credicorp Capital and President of the Lima Stock Exchange, on the trend toward expanding business abroad and the ease of doing business in Peru.

What is the core focus of Credicorp Capital?

Peru has been growing significantly over the past decade. Most of our Peruvian clients were well served inside Peru, registering domestic market growth followed gradually by a regional presence in such markets as Chile or Colombia. While we could serve them well in Peru, we lacked the necessary resources to help them enter regional markets. That is when we thought there would be a space for what is going on in the Mercado Integrado Latinoamericano (MILA), or this part of the Pacific Alliance. Every day numerous Colombian, Chilean, and Peruvian companies are investing in the other markets. What is happening in the real sector in terms of investment is that we have built this investment banking platform to support not only companies, but also individuals and institutional investors that are starting to invest all over our region. That is why we first created BCP Capital, an investment banking group, in Peru, as a spin-off of assets out of BCP. Later, we acquired a majority stake in Correval in Colombia and IM Trust in Chile. These acquisitions plus BCP Capital became Credicorp Capital. If you look at South America, you have Brazil on one side, which is huge but has its own dynamics, and then Colombia, Peru, and Chile, all having similar economic and political models. Individually, we are quite small, but if you add up the three nations’ populations, there is a total of 90 million inhabitants with a GDP of $800 billion.

The Bolsa de Valores (Lima Stock Exchange) is heavy on mining currently and some predict negative effects from the recent drop in commodity prices. What do you think?

The Lima Stock Exchange (LSE) has always been a mining exchange. About 50% of the market capitalization or more has been weighted on mining companies. I would like to have other sectors get into the market and weigh in, but the situation is that we have been a mining country and we will continue to be a mining country. A lot of what happens at the LSE will depend heavily on what mining companies do. Last year was a particularly hard one amid declining commodity prices, and you saw this reflected in the prices of equities traded on the LSE. The mining companies’ prices lost around 40% of their value, which given their value at the bourse, affected the index overall. There has been a slender rebound this year as prices have stabilized and some of them have even gone up. Nonetheless, the performance of those companies often depends more on external factors more than on the plight of Peru.

What is the climate in Peru for international investors?

The LSE recently reduced trading costs by 70%, which is significant. But, with this 70% we are not as competitive as we should be. Actual volumes haven’t increased substantially as a result of this price reduction, as on top of these costs, brokerage costs are also incurred. In the past, infrastructure cost was 20 basis points (including SMV and Cavali). That came down to 10 basis points, but if you add 50 basis points on top of that from brokers, the reduction is much smaller… the second thing is that Peru is the only one of the Pacific Alliance to levy a 5% capital gains tax, which renders us less competitive than the other two countries. Liquidity simply moves to a more efficient market. On a typical day at the LSE, the average traded volume will be around $15 million. But for Peruvian companies trading in New York, it is going to probably be $150-200 million.

What role do you expect the bolsa to play in the broader development of the country over the coming years?

The main advantages that the stock exchange brings are transparency, liquidity, and good pricing. This said, transparency in particular is key. If we are going to have investors, both internal and from abroad, we need to make sure that companies, be they listed on the LSE or not, are complying with the highest standards of governance. Something we should be focusing on, and indeed, something we are still working on as a market and as a nation is corporate governance and transparency. As long as we are seen as a highly competitive, transparent, and well-governed exchange, more companies will be keen to come and list on it, and that culture will permeate throughout the country.