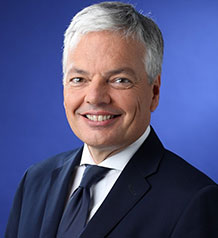 HE Didier Reynders is a Belgian politician and member of the Mouvement Réformateur. He was the Belgian Deputy Prime Minister and Minister of Finance and Institutional Reforms in the Van Rompoy government, which took office on December 30, 2008. Born in Lií¨ge, he studied law at the University of Lií¨ge, and from 1986 to 1991 served as Chairman of the NMBS/SNCB. He is the Minister of Foreign Affairs, after serving as Finance Minister since 1999, and has been Deputy Prime Minister since 2004.

Share on:
"The overall majority of the Belgian community resides in Malaysia for business reasons."

What can Belgium learn from Malaysia and, in turn, how can Malaysia benefit from Belgium’s strengths in the fields of science and technology?

Malaysia’s excellent geographic location allows the country to position itself as an Asian hub for the halal industry and Islamic finance. The World Bank’s Logistics Performance Index, which ranks Malaysia 25th out of 160—and first among the Upper Middle Income Countries—proves Malaysia’s attractiveness as a logistics hub. Moreover, Malaysia’s Islamic economy boasts a strong international reputation. Benefitting from Malaysia’s expertise would not only allow Belgian companies to better cater to the Malaysian market, but could also be a key to open doors in other regions where the Islamic economy is present. The Etiqa joint venture between Belgium’s Ageas Insurance and Maybank is a perfect example of how our respective companies could benefit from each other’s strengths. With a total value of the Islamic Economy estimated at $6.3 trillion, the stakes are high. In this perspective, we must not forget that the sector also has a potential in Europe as well, with Belgium and its neighboring countries alone counting for approximately 12 million Muslims. Malaysian companies could benefit from this market by investing in our region. From our side, Belgium is ready to become Malaysia’s gateway to Europe. Other Asian countries have already made extensive use of our infrastructure and our manpower. I’m thinking in particularly of our seaports and our airports, which serve as a hub for Europe, both for passenger and freight traffic. Belgium is located in the heart of Europe, has an incredibly skilled and multi-lingual labour force, and offers an advantageous tax regime for foreign companies keen to invest in our country. Belgium has a lot to offer to Malaysia: ranking 15th in the world in terms of GDP per capita and 19th in the value of its exports, Belgium and its companies give proof of a high degree of economic efficiency, combined with an outward look on the world. In the world of S&T, many Belgian scientists are currently working at leading foreign universities. At home, the high scientific standard of Belgian universities attracts many foreign students and researchers to our scientific institutions. Traditionally, science in Belgium was linked to education and the public sector. But for the past few decades, Belgian scientific research has been strongly industry driven, with a special focus on space travel, biochemistry, medicine, pharmaceuticals, and IT.

There is a growing Belgian business community in Malaysia. What attracts these companies to set up regional offices here, and what opportunities does the Malaysian market present?

There are currently approximately 385 Belgians registered in Malaysia and we hope to reach the cap of 400 this year. The overall majority of the Belgian community resides in Malaysia for business reasons. Different assets of the country attract them. Firstly, Malaysia has a unique geographical location: centrally positioned in South East Asia, the country is an ideal hub for the ASEAN region as well as the Far East. The Strait of Malacca is a vital artery for the world’s international trade. Malaysia boasts an open economy, which attracts many foreign investors, including Belgians. Moreover, the country is also an important producer of commodities, notably palm oil and crude oil and gas. These two commodities have given rise to a strong petrochemical and oleochemical sector in Malaysia, in which our Belgian companies actively participate. Last but not least, Malaysia is a country where all these business strengths are combined with a good quality of life. Malaysia prides itself in being a moderate country with good living standards, two key factors for attracting foreign talent and businesses. If the country upholds the essential values of tolerance and moderation, future foreign investments will be secured.

Negotiations are underway to establish an FTA between Malaysia and the European Union. How soon do you think such an FTA could be finalized?

The importance of the European Union for Malaysia can hardly be underestimated. Today, the EU is Malaysia’s fourth largest trading partner, the second largest trading partner for ASEAN and by far the largest source of FDI into the ASEAN region. With 500 million consumers, it is the largest single market in the world economy, where imported goods can circulate freely. Malaysia could boost its trade with the EU and Belgium even more once the FTA is concluded. The European Commission and the EU Delegation to Malaysia are currently working together with Malaysia to restart the negotiations. It is difficult to predict when these negotiations will be finalized, but this timeline is not the primary concern. What is most important is that the FTA becomes an ambitious, all-encompassing agreement that tackles all existing trade barriers, so that it benefits both our populations. Belgium strongly supports the increasingly leading role the EU is taking up in Malaysia, because its identity is very much linked to that of Europe: we are one of the founding fathers of the EU and Brussels, which is home to more than 160 nationalities, is considered the de facto capital of the Union. In that sense, we could draw a parallel with Malaysia’s famous slogan and say: “Belgium Truly Europe.“

How will increased integration between ASEAN nations further boost the importance of Malaysia as a gateway to the rest of Southeast Asia?

With a market of 600 million consumers and average annual GDP growth of 6% over the past 15 years, ASEAN has become a global economic player to reckon with. Today, ASEAN represents a $2.5 trillion economy. Once the ASEAN Economic Community is completed by the end of 2015, the region will be the third largest single market in the world. And with these increasing powers come increasing responsibilities: as the ASEAN Chair in 2015, Malaysia will guide ASEAN during an important year in the history of the Association. Belgium supports ASEAN’s efforts in establishing a full-fledged ASEAN Community, which will enhance political, economic, and socio-cultural integration amongst its members. By continuing to promote its business friendly environment at the center of South East Asia, Malaysia will continue to serve as a gateway to ASEAN for European and Belgian companies.

How do you see bilateral relations between the two countries evolving in the coming years and in which particular areas will cooperation efforts be focused?

Our bilateral relations go back to the founding of the Federation of Malaya in 1957 and even before. They have been excellent during all these decades. During the Economic Mission in November last year, Belgium has sent a clear message that it “meant business“ with Malaysia and that we’re ready to take our bilateral relations to the next level. Our trade has been increasing year-by-year and stood at EUR1.3 billion in 2014. Our healthy trade relations remain our primary focus, but also provide solid bedrock for further expansion of our relations. We feel that there is scope to advance even further, because there are still areas of untapped potential. I’m hereby thinking of possible synergies in the fields of S&T/R&D and higher education. We look forward to further explore the possibilities in these domains in our continued commitment to strengthen our ties with Malaysia. Malaysia is now member in the UN Security Council for the period 2015-17. Belgium is also the candidate for a seat in the UNSC for the 2019-20 period. Let us seize this opportunity to develop closer ties at international and diplomatic level. Malaysia and Belgium have both a long tradition of supporting UN peace operations. In that framework, both countries could work together and develop joint initiatives to the benefit of people and countries affected by war and other plagues.