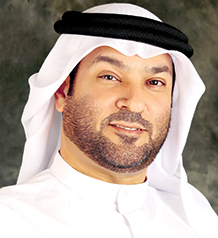 Sultan Abdullah bin Hadda Al Suwaidi has been Chairman of SEDD since 2012. Prior to being appointed Chairman, he served as Secretary General of the Sharjah Consultative Council from 1999 to 2012, and Director of Membership Affairs and Transactions at the Sharjah Chamber of Commerce and Industry from 1988 to 1999. Since 2012, he has been a member of the Sharjah Executive Council, the Emirates Standardization Authority Council, and the Economic Coordination and Cooperation Committee. He holds a bachelor’s degree in public administration/politics from UAE University in Al Ain.

What role has SEDD played in encouraging growth in manufacturing and making it attractive for newcomers?

Industrial output represents about 18% of the Emirate’s GDP. SEDD plays a great role in developing the industrial sectors by identifying investment opportunities, developing industrial indicators, building databases, and undertaking more than 90 visits to factories. The number of industrial licenses increased by 2.35% in 2016 compared to the previous year. This growth was due to significant cooperation between SEDD and our local and foreign partners. In addition to taking an active role in monitoring trends in the sector, developing lines of communication, and encouraging growth, we are continuously developing and improving our industrial infrastructure. We work hand-in-hand with the appropriate government bodies for the external promotion of industry, technical support programs, and to forge bilateral cooperation with foreign countries and businesses.

How does SEDD work to attract FDI and foreign entities to bring their commerce to Sharjah?

SEDD promotes Sharjah through its participation in local and international economic exhibitions and forums. These are excellent platforms for attracting investors and international attention to Sharjah because of their diverse participation and attendance. SEDD also places great value on developing economic, trade, and cultural relationships between Sharjah and foreign entities. In this manner, we can increase mutual investment rates across all sectors, provide top-of-the-line facilities, and overcome obstacles in international commerce. Sharjah enjoys one of the most attractive and promising environments for investment because of its range of safeguards, incentives, and state-of-the-art facilities. Raising awareness at international conferences and forums is vital to promoting Sharjah’s economic and trade comparative advantages, in addition to acquiring expertise and capabilities.

What are the most effective methods of promoting and facilitating two-way communication between government entities and citizens?

SEDD’s customer satisfaction rate of 95% is one of the highest for a public organization globally. This demonstrates the department’s level of experience in dealing with the public and service seekers. SEDD’s ability to effectively communicate with individuals is based on four criteria. The first is the availability of continuous communication through direct or indirect channels such as e-services like the Tasheel service centers. The second is the effectiveness of communication between the government and individuals, which we evaluate in periodic surveys. Third is SEDD’s ability to anticipate people’s needs by predicting obstacles or challenges in the market. The last criterion evaluates our efficiency in resolving complaints and addressing the actual requirements of individuals.

Sharjah is undergoing great transformations in several sectors. How do you measure the Emirate’s growth, especially in relation to the duties of SEDD?

Sharjah boasts several unique historical, cultural, social, and infrastructural components, making it a chosen destination for residence and work. The explosive population growth we have witnessed in the last three to four years presented the need for government entities to increase the number of e-services, employees, service channels, and regulatory inspectors, for which we have accommodated. The Emirate’s expansion in terms of transport, education, healthcare, and manufacturing are reflections of Sharjah’s growth and renewed potential. Sharjah had a 3.5% GDP growth rate in 2016 and increased the number of active business licenses to more than 72,000 by the end of 2016, up 6.1% from the previous year. The economy grew healthily sector by sector as well, by 7% in manufacturing, 6% in construction, 9% in the wholesale and retail, 6% in restaurants and hotels, and 7% in the real estate and business services area in 2016. Furthermore, Sharjah witnessed an increase in general production to AED140 billion (USD38.1 billion) in 2016, a growth of 4%. The volume of fixed capital formation in 2016 exceeded AED25 billion (USD6.8 billion), public investment increased by 5%, and the number of micro enterprises increased by 22.6%. We are very confident in our goals of attracting investment and maintaining customer satisfaction.