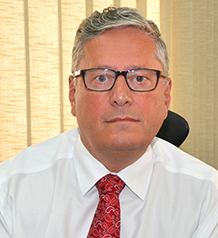 David Gledhill has spent 35 years in the ports industry, previously as CEO for Hutchison Ports UK and COO at Felixstowe Dock and Railway Company, prior to joining APM Terminals and his appointment as CEO at the Port of Salalah in April 2014. He has received honorary doctorates from the University of East Anglia and the University of Essex, and has successfully held senior management positions for businesses in Germany, Holland, Belgium, Luxembourg, and Portugal. His expertise is focused on all aspects of global supply chain management and multimodal freight operations

Share on:
TBY talks to David Gledhill, CEO of the Port of Salalah, on the impact of the port and its development plans.

What have been the most successful projects for Port Salalah in 2014 and 2015?

Overall, productivity was about the same as the previous year, which was positive considering that the Khareef season was longer last year, and typically has a negative impact on productivity. For the coming year we bought two different types of equipment to improve productivity—suction pads and shore tensioners. During the course of 2015 we are expecting our productivity to be less impacted by the Khareef, because of the investments made in this machinery. We are very successful with bulk cargo, as we will handle 12 million tons this year. We handled 10 last year, and will handle 15 next year. To achieve this, we will have new general cargo berths coming on line later this year. We are making investments into automated handling equipment to enable us to turn the vessels around faster and therefore create higher capacity. There is also a new liquids jetty being delivered to us in November this year. We expect to handle a million tons of fuel from that jetty next year, primarily for military aviation and marine fuel. A broad range of liquid cargoes will come as a result of us having this liquids jetty, such as chemicals and petrochemicals. Although the container business is in the doldrums at the moment, the rest of the business is booming.

Port Salalah welcomed the 399-m MSC London in the past year. How important was that for Port Salalah as an achievement?

The MSC London was good for two reasons. First, it demonstrates the confidence that MSC—our second biggest customer—has in our business. Secondly, the productivity that we achieved on that ship broke all records. We had seven cranes working on it, and turned it around in record time.

What are the some of the major investments that have been made by Port Salalah?

A new jetty will give us berthing space for our non-core activities, particularly cruises. We have a fairly short but intensive cruise season as the vessels move from the Far East into Europe. We want to develop the cruise season and make business throughout the year. If we can lengthen the cruise season, it will be good for the rest of the community. We are also investing in some automated equipment for the handling of the limestone and gypsum. Not only do we export it as bulk gypsum, there are also manufacturing plants in the Free Zone, which convert it into boards.

What are the major plans and expectations for Port Salalah over the next year?

The most exciting thing is a development with the dhows. Salalah has quite a strong dhow business. Traditionally, those dhows have gone between Salalah and Somalia, because there are not a lot of developed ports in North Africa. Recently, due to the problems in Yemen, we are handling more dhow business going to Yemen. Around 200 containers come in every week, and we are discharging them into dhows to go to Yemen. We need to develop Salalah not just as a port for Omani cargo, but also for Yemen. Aside from that, we need to convince more people to bring their cargo to Salalah rather than to the Gulf. Salalah is also the third most productive port in West Africa, the Middle East, and Europe.