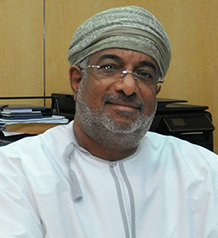 HE Yahya Said Abdullah Al Jabri has vast experience of global corporate and investment banking with academic qualifications from prestigious American schools including the Kellogg School of Management, Harvard Business School, and Darden University, where he attained degrees in advanced Management programs. He holds senior positions in Oman’s leading business and financial sectors, such as being a member of the Board of Directors at the Central Bank of Oman, a Board member of the Civil Service Pension Fund, a Board member of the Oman Investment Fund, Chairman of Pak Oman Investment Company, and Chairman of the Capital Market Authority. He is also Chairman of Duqm Special Economic Zone Authority (SEZAD).

Share on:
TBY talks to HE Yahya Said Abdullah Al Jabri, Chairman of Duqm Special Economic Zone Authority (SEZAD), on what the zone has achieved and its plans for the future.

Can you highlight the major accomplishments for SEZAD in 2015?

Duqm is the latest economic zone in the region, which covers 1,745sqkm. The difference between our zone and others in the region is that ours is fully integrated. We have large zones and sub zones within the same area that include warehouses, ports, dry docks, airports, and a fishing zone. We are waiting now for the gas pipeline to come, and our focus is on the non-gas energy industries. The gas will come before 2019. We are also active in the tourism zone, because there is no need for gas energy in that. The climate is good, which has made tourism attractive in Duqm. We have beautiful and clean beaches that are still untouched. Because we are between Muscat and Salalah, people often pass between the two places, stay in Duqm, and enjoy a few nights. It has become a station and rest area to break up a long journey. The airport has a temporary terminal currently, which is sufficient for now; however, a large terminal will begin construction and finish within two years. The runway is one of the largest among local airports, and it can even accommodate an Airbus A380. The port is one of the largest in terms of its size in the Middle East and North Africa, and most of it is finished with only a few phases left. The port is currently working commercially, and we are receiving shipments for the oil fields. We have the dry dock, which maintains around 300 ships. We are expecting a lot of activity for the port and dry dock in the near future because of the number of shipping companies we have contacts with. The infrastructure, including roads and lighting, is almost complete. We have some roads to residences that still need to be completed. We recently tried to include the private sector because of the good response we have received from them. There is a company listed on the Muscat Securities Market, which is building a huge complex. It will be able to accommodate 16,000 people, including the latest facilities and entertainment. We also signed a contract with an Australian real estate company that will develop a resort, close to which will be a commercial center. It will build a complex that will cost about $500 million; however, it will be completed in phases.

Looking at Oman’s transportation and logistics sector as a whole, how would you say Duqm has complemented Sohar and Salalah to increase connectivity?

All of them are complementing each other, yet Duqm is most efficient due to its multi-modal connectivity system comprising a sea, air, and road network and upcoming inner rail network, thus making Duqm SEZ the logistics hub for the Middle East region, Indian subcontinents, Asia, and Africa. It is worth mentioning that the upcoming road link from Oman to Saudi Arabia would generate potential to enhance business between the two countries leveraging both insurance and time value.

What are your major targets and plans for the coming year in order to continue to implement these major projects?

Duqm has a large area to cover, and we are working on developing in phases. We are undertaking large projects to serve as anchors, such as the port. We are expecting the refinery and petrochemicals to come in as anchors, too. Our airport will play a major role with cargo because it is both a local and regional airport. We need to finish the uncompleted aspects of the port so that it is able to function at full capacity.