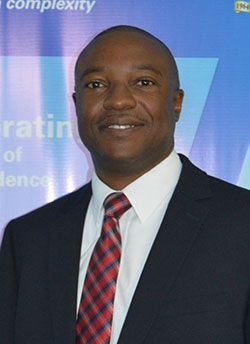 Jason Kazilimani, Jr. is the Senior Partner and CEO of KPMG Zambia. He has over 20 years of experience at KPMG in Zambia, Nigeria, and in the UK. Prior to joining KPMG he worked for the Accounting and Finance Department of Zambia Consolidated Copper Mines Limited, the predecessor of ZCCM Investments Holdings Plc. He holds an MBA in Financial Services from the University of East London. He is a Fellow of the Association of Chartered Certified Accountants (ACCA) of the UK and the Zambia Institute of Chartered Accountants (ZICA). He is also an Associate of the Institute of Chartered Accountants of Nigeria. He has recently been re-elected to serve on ZICA’s Council and chairs its Education and Training Committee. Kazilimani is also President of the American Chamber of Commerce in Zambia and Vice President (South) of the Zambia Golf Union.

Share on:
"Our strategic objectives revolve around quality, profitability, growth and people development."

What are KPMG’s strategic priorities in Zambia over the next few years?

Our strategic objectives revolve around quality, profitability, growth and people development. The strategic priority is to be the best in the market place, focusing on infrastructure, government, construction, power generation, and the more traditional mining and financial services sectors.

What is the regional significance of Zambia for KPMG?

Zambia is a fast-growing market in several respects, as can be seen by the influx of foreign entities opening businesses here, or entering into strategic alliances and joint ventures with local Zambian companies. KPMG is an international firm serving clients who have a wide African footprint, including in Zambia. It is therefore important that we have a presence in all major and minor economies. As such, the presence of KPMG in Zambia is important to the wider firm, particularly in the Southern African Development Community (SADC) region.

What would you say are the peculiarities of the Zambian market and the most common concerns of a foreign company keen to enter the country?

Often companies are concerned about indigenization laws. Currently, Zambia doesn’t have any of these with the exception of the Citizens Economic Empowerment Commission requirements, whereby companies that are locally owned, influenced, or managed have a greater chance of doing business with the government. There are also investor-friendly labor laws, and no exchange control provisions. Investors are often interested in the availability of tax incentives, with the Zambia Development Agency incentives available (including up to five years free of corporate taxes, and 10 years at a reduced corporate tax rate) for investors in priority sectors and areas. Zambia also has abundant natural resources, not just in copper, but also in other natural resources. Agriculture in particular is a huge potential growth area with significant amounts of unutilized arable land and large freshwater resources. One area of concern for foreign investors is to ensure that there is stability from a governmental and policy perspective. This has been highlighted with the recent introduction of the new mining tax regime, which has been controversial. However, the new President has publicly indicated his willingness to engage with the mining companies on this, which should help to reassure investors.

How would you assess the current level of foreign interest in the country and what needs to be done by both public and private sectors to incentivize and improve the framework for foreign investors?

The level of foreign interest in the country is high. As a professional services firm, KPMG has advised several incoming potential investors, and the number is growing. Zambia is renowned regionally for being politically stable, which appeals to investors wishing to invest in the Southern African region. From the public sector, as mentioned above, policy stability is vital, especially in allowing foreign investors to produce reliable financing models. Meanwhile, certain basic services like internet connectivity, and power and water supply should be enhanced. However, having said that, the ease of doing business in Zambia has improved over the years, and the government has been taking steps to improve this, for example, with the creation of the Zambia Development Agency and the One Stop Shops (combining PACRA, ZRA, ZDA offices). The government is also encouraging public-private partnerships, for example with the border posts that have been privately funded, but that will be transferred to public ownership in due course.

What regulatory changes are we likely to see in Zambia in the near future?

A new Companies Bill has been devised to broaden the duties and responsibilities of directors. Additionally, an Insurance Bill seeks to restrict foreign shareholdings, and will require prior regulatory approval of CEOs, senior personnel, and auditors, although it is unclear whether this particular bill will progress. As mentioned above, the mining tax regime may also change depending on the outcome of the government’s discussions with business.

How would you describe the role of SMEs in Zambia, and how can KPMG assist the development of a more efficient SMEs structure in the country?

SMEs are essential to the Zambian economy, as for any developing economy. There has been an emergence of a significant number of SMEs in Zambia. This is an area of policy focus by the government; the ZDA tries to support SMEs and to encourage joint ventures between local SMEs and foreign investors. The challenge with SMEs is that they are often reluctant to seek professional advice due to the cost implications. KPMG is pleased to assist any SMEs in need of advice.

What is the significance of KPMG in the socioeconomic development of the country?

KPMG, as a professional services firm, acts as a conduit for investors looking to enter the country. And as a big four firm, it also helps to implement and maintain the highest standards in the professional work we do, increasing transparency and standards of probity nationwide. I believe that the market has recognized our efforts as evidenced by the winning of, amongst others, such awards as Business Auditing Firm of the Year 2014 by Finance Monthly M&A, Auditors of the Year 2014 by ACQ Global Awards, and Adviser of the Year 2015 by Acquisition International. KPMG also has an active CSR policy and looks to support the communities we work in as part of that. We are also active in the Zambia Institute of Chartered Accountants committees such as Taxation, Technical, and Education and Training. We are also key players in both the American and British Chambers of Commerce.

Another election is due in just over a year, which we expect to be hotly contested, but relatively peaceful. In the meantime, we expect greater policy stability from the government, which should hopefully attract more investment into the country. The Zambian economy will continue to grow, and we expect KPMG to grow along with the economy.