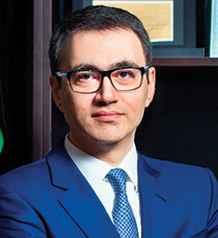 Chairman of the Executive Board, Tamiz Shahar

Zakir Ibrahimov was born
in Baku in 1974. He was
admitted to Leningrad State
University of Law faculty
in 1990, and continued his
education at Baku State
University’s Law faculty in
1992, graduating in 1996.
He studied for his MBA at
Georgia State University
(USA) from 2004—2006.
He started to work for the
TAIS Integration Centre
for Youth of Azerbaijan in
1993 as a specialist in Law
and Business development.
He has worked as a Leading Specialist in law and business development at Aztijaret, and has occupied leading positions at Azpetrol JSC. In 2003, he was appointed as Deputy General Manager of the
EUPEC Pipe Coating Azerbaijan Joint Venture. In
2005-2006, he worked as
General Director of Azpetrol in Moldova. In February 2008, he was appointed Chairman of the Executive Board of Tamiz Shahar.

Share on:
TBY talks to Zakir Ibrahimov, Chairman of the Executive Board of Tamiz Shahar, on implementing new environmental operations and beautifying areas that were once forgotten.

What were the most significant projects implemented by Tamiz Shahar in 2014?

Tamiz Shahar has implemented the Balakhani Material Recovery Facility (BMRF) at Balakhani Industrial Park, which is aimed at recovering useful materials from household waste. It has an annual capacity of 200,000 tons of waste. We have been working to increase the amount of segregated raw materials, which is currently at 20%. After recyclable materials are segregated from the total mass, the remaining waste is transported for incineration at the Baku Waste-to-Energy Plant, which is considered to be the most contemporary and largest plant in the region and Eastern Europe. Incinerated waste releases energy that can meet the demand of 100,000 households. So far, 368 million KWh of electricity has been produced, 306 million KWh of which was transferred to the state electrical grid and the remaining electricity was used to meet the internal needs of the plant. Residual waste, which is eligible neither for sorting nor incineration, is sent to the new sanitary Balakhani Municipal Solid Waste Landfill. Prior to 2009, all waste was deposited at an uncontrolled dumpsite. The area was covered by a cloud of putrid smoke from burning waste. However, Tamiz Shahar started the proper placement of waste, and further leveled and landscaped the area. The result of these activities completely changed the look of the site. The proper placement of waste lowers ecological risks, and helps with the improvement of the environment. The multilevel and functional monitoring conducted on a regular basis in the area shows that the amount of waste in the soil and air corresponds to industry norms, and the amount of harmful particles in the water has been reduced significantly and this positive tendency seems to keep continuing. The final step has been taken for the operation of the Balakhani Municipal Solid Waste Landfill as a sanitary landfill in full compliance with European standards. The international open tender competition, which aims to rehabilitate Balakhani municipal waste disposal landfill, was held in the framework of part of a joint project with the Ministry of Economy and Industry and The World Bank, and was named Integrated Solid Waste Management. The contract was signed by the consortium of the winning countries, Turkey and Greece, and work, which has already begun, will be completed by the end of 2016. Tamiz Shahar also regularly holds coastal clean up activities twice a year. We cooperate with the Heydar Aliyev Foundation and IDEA Public Association and the campaign is held in two phases: before and after beach season.

What progress has Tamiz Shahar made in the environmental rehabilitation of the Absheron lakes?

Our first priority in this project is Boyukshor Lake. Cleaning activities started there in 2013. Boyukshor is the biggest lake and one of the most contaminated on the Absheron Peninsula. The first phase of rehabilitation is almost complete. To accelerate the project, the lake was divided into two parts and included the construction of a 1,570m dam on the foundation of the highway between Ziya Bunyadov Avenue and Balakhani highway. The second phase of the project will start after the First European Games and will cover the entire lake area and surrounding sites. Historically, Boyukshor has been critically contaminated by sewage water discharge from 76 sources, which we have now eliminated. The main contaminated area is near Balakhani. A 1,850m dam was built next to the Balakhani settlement in order to prevent oil waste pollution coming from the old Balakhani oil fields. Special equipment supplied from the Netherlands will clean the bottom of the lake at shallow levels and remove debris that has accumulated. Sediment winnowed by pipes is filled out into three temporary disposal areas located 5.2km far away. The cells of the disposal area are completely isolated from the environment and will be defused without any harm to the environment or public health. More than half of the total 2.8 million cubic meters of sludge has been removed. The implementation of this historic project will significantly reduce all pollution risks. The second lake at Zigh is in the design and engineering stage.

What role will Tamiz Shahar play in preparations for the First European Games?

Most events of the First European Games will take place in the Olympic Stadium Complex that has been constructed on the shore of Boyukshor. Tamiz Shahar is making Boyukshor a high priority among the nine lakes. Existing oil and gas pipelines have been moved to a new corridor and are covered with a protective coating. The walkways have been completely concreted, and a beautiful 1km promenade and fountains have been installed. The construction works of Boyukshor promenade has been completed. There are great opportunities for city residents and guests. The promenade adds more value to the beauty of Baku. The park, with a total planting area of 15ha, has been built in the southern shoreline near Ziya Bunyadov Avenue. People have a chance not only to spend their leisure time walking down the promenade, but also to sail on the lake on canoes with the help of pier stairs.

What kind of ecological collaboration does Tamiz Shahar have with local organizations?

We cooperate with the Heydar Aliyev Foundation, and IDEA Public Association. Tamiz Shahar has been implementing “Tamiz Gala” project since 2012 in order to create proper waste management and waste segregation systems in the Gala settlement. We have eliminated 52 illegal waste sites in Gala, and installed 149 waste collection yards, 630 containers, 45 trash bins in areas with large concentrations of people, and 200 containers within larger production areas. Every year since 2012, the “From Waste to Art” project has been held in the Gala Historical and Ethnographic Reserve, and the International Children’s Conference with the slogan of “3R – Reuse, Reduce, Recycle” has been running for three years. Since 2010, environmental summer schools have been organized in the regions every year with the IDEA Public Association. We have extensive cooperation with universities, have arranged tours to the Material Recovery Facility and Waste to Energy Plant, and participated in paper-recycling and tree-planting campaigns with various organizations. Tamiz Shahar has established an exemplary management system in ASAN Service centers in which waste is collected and separated.

What kind of partnership and investment opportunities are created through participation in events such as the economic forum in Brussels?

Tamiz Shahar held an informative presentation about the rehabilitation of Absheron lakes that generated great interest in the process and the progress of environmental restoration in Boyukshor. Interested parties held private meetings with our representative, and cooperation possibilities were discussed. We are also interested in cooperation with consulting and contracting companies for potential partnership opportunities.

Our main targets are to develop further waste management systems in Baku and increase recycling. We will focus on enriching technical facilities and research. We want to ensure a better consumer culture, decrease wastefulness, and promote the proper use of collected waste and sustainable management. We will continue the rehabilitation of Absheron lakes as successfully as we started.