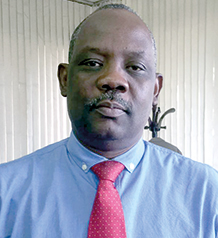 Ladislaus Matindi was appointed CEO of Air Tanzania in September 2016. He was previously the Director of the EGNOS Africa Joint Program Office, a regional structure created to coordinate the deployment of GNSS/EGNOS services in Africa with its headquarters in Dakar, Senegal. He also held various management and functional positions at the East African Community (EAC) Secretariat and Tanzania Civil Aviation Authority. He holds a master’s degree in telecommunication engineering and an MBA. In addition, he is a professional engineer registered by the Engineers Registration Board of Tanzania and a corporate member of the Institution of Engineers Tanzania.

Share on:
TBY talks to Ladislaus Matindi, Director General of Air Tanzania, on his plans to revive the airline, the importance of air travel, and the future of the aviation sector in Tanzania.

The government wants to revive Air Tanzania and a three-phase plan has been decided on. Could you share the details and status of this plan?

We are concentrating in the first phase, which is the domestic market. It will take maybe two to three years before we move on to the second phase, which will look beyond Tanzania to the nearby markets of Kenya, Uganda, Burundi, Rwanda, the DRC, and Zambia. The third phase is to have intercontinental flights beyond our region. The idea is step-by-step growth to eventually compete with other global players. This is a high-level plan that must be structured with specific milestones to move from one phase to the next. For Phase I, we have acquired two new aircraft from the government and the next move will be to consolidate our position in the domestic market. We have several competitors within the domestic market, and there is a stiff competition here. There are two other airlines operating alongside us, Precision Air and FastJet, a low-cost carrier. The idea is to establish our position as the dominant airline in the domestic market. We have our own business strategies, with a customer-oriented focus, to position Air Tanzania in the market.

What strategies do you have to make Air Tanzania profitable and what are the major challenges here?

For a long time we were operating purely as a social service provided by the government. Hence the company was not concerned with its financial position, and profits and losses were not an issue for anyone. Now, we are moving away from that mentality and will operate as a commercial entity. We have to understand the challenges faced by our competitors and have to also make ourselves more competitive from a human resources point of view. We will work as a commercial entity and make sure that whatever we spend on has a reason. Ideally, what I want is a complete cultural change and to move away from being an organization that does not look at financial statements to one that is primarily concerned with results and the outlook of its financial statements.

How can Air Tanzania contribute to this country?

First, we have to look at the nature of air transport, which is a facilitative sector. It cuts travel time and makes it easier to reach remote and otherwise difficult to access locations; much more than that, air travel opens potential. Tanzania is a vast country with a great deal of potential; therefore, air transport, especially Air Tanzania, has a role to play in facilitating business opportunities. Our role is to establish connections between those places that have economic potential available to the wider economy at an agreeable cost.

The government has already allocated TZS100 billion to construct airports across the country. How will this impact the future of the aviation sector?

The aviation sector in Tanzania has been growing, registering extremely strong growth of between 10 and 15% per annum. Tanzania is moving from a low-income economy to a middle-income one and consequently I expect growth to increase to 15-20% a year. Infrastructure is crucial for this. If we have aircraft but do not have anywhere to land, then it is useless, which is why the government has invested in building the necessary infrastructure for us to make sure that we can reach all parts of the country.

What are your goals and expectations for 2017?

Frankly speaking, Air Tanzania was in the midst of a crisis and my first objective is to turn around the airline. I have given myself until June 2017 to stabilize this and to make sure we get out of this hole. 2017 will be a crucial moment; it will be the start of the new Air Tanzania as far as operations are concerned. We will then start competing as an airline, moving from the ICU and seeing the light for the first time.