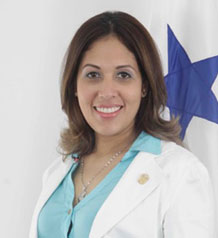 Marisela González graduated from the Universidad del Istmo in 2002 with a degree in Marketing and Advertising Management. She held a number of positions in KLM Royal Dutch Airlines before becoming Vice-President, and subsequently went on to complete postgraduate studies including a Master’s in management with a focus on human resources. She is continuing studies in law and political science, while also teaching at the country’s top universities. Since 2014, she has served as vice-director of PROINVEX, rising to the position of director in late 2015.

PROINVEX was created as agency for investment and export promotion. What features of Panama do you highlight to the international investor community?

Panama offers a competitive logistics platform through sea, air, land, and railway, linking the two seas between Panama City and Colón. The country features a service-based economy that accounted for 72% of GDP as of September 2015. Panama’s sustainable economy was able to grow 6.2% in the last 10 years, even during the financial crisis. As a dollarized economy with three quarters of GDP coming from the service sector, the effects of fluctuations in international commodities prices on surrounding markets do not impact Panama as hard as export-oriented economies. The financial system has, over the last decade, shown strong figures due to wise policies regarding credit loans and procedures.

Panama has taken measures to come off the FTFA’s grey list. Do you think this has acted as a deterrent to investment in the financial sector, and what are other barriers to FDI that need to be overcome?

Financial sectors across the world face challenges regarding the financing of terrorist activities and money laundering. Panama has taken the right steps to solve this problem and erase the image of a fiscal paradise. The government has modified Law 47 of 2013, creating a system of custody of bearer shares. The standard is to always know who is the ultimate beneficiary of the securities of any given company. Panama’s message to international investors is directly linked to it being a transparent financial system, and recent efforts have proven that we are on the right path. In numbers, the International Banking Center recorded more than $115 billion in assets and $1.2 billion in profits by September of this year. Competitiveness in financial systems has experienced worldwide crisis, but general figures have prevailed solid and investor confidence is still growing despite the international crisis. Panama has free conversion of foreign exchange and no restriction to capital inflows and outflows, with multiple incentive laws that together create an attractive scenario for investments.

Which products contribute the most to Panama’s export revenues, and what can these industries do to move up the value chain?

The top 10 export products from Panama as of 3Q2015 hold a strong concentration in total exports. Fresh bananas account for 13.2% of total exports and represent an FOB value of $70.9 million. Cold water prawns and shrimps of cold water account for 8% of exports, while other fresh or refrigerated salmonids account for 4.3% and raw sugar cane contributes 3.6%. Fish flour and pellets, iron and steel scraps, and fresh or dried pineapple contribute 3.2%, 3.2%, and 3.1% respectively. Wood accounts for 3% of export value, fresh watermelon 2.6%, and medicines for therapeutic use 2.6%. Total exports in 3Q2015 amounted to $536.2 million. The value-added industry for Panamanian products is the right approach to increase productiveness. There are also other non-traditional products that can generate excellent income for local producers or foreign investors. Panama has the climate for the production of cocoa, with an excellent perspective on the international market. The yellow fin tuna is another good example, due to several studies by Japanese researchers whose conclusions detail that Panama’s Atlantic shores are ideal for developing an aquaculture project. This fish is highly demanded in Asia at a high price. Pineapples can be raised year-round, and their sweetness grade is the best in Latin America and the Caribbean. These are just a few examples of case studies showing how FDI can be brought into Panama and create an industry for those agricultural products that were traditionally exported raw.

Panama has a number of special economic areas offering fiscal and other incentives. How much of an impact have they had in pushing forward the goals of PROINVEX and what can be done to prompt the Colón Free Trade Zone?

PROINVEX’s goals are directly linked to the promotion of all incentive laws and special economic areas through Panama Invest events around the world that showcase Panama’s attractiveness to investors. The purpose is to create a direct link between top government institutions depending on the previous selected economic sectors and the potential investors in the country of destination. With regards to the Colón Free Zone, the answer is market diversification. Over the decades, entrepreneurs created solid business relations with countries such as Venezuela and Colombia. Both countries are facing social and economic struggles. The value of the US dollar has been increasing against Latin American currencies, which makes it expensive for buyers to maintain their same level of consumption. As a result, sales are decreasing. The answer relies on both the government and private sector. On the one hand, the government must create the conditions for entrepreneurs to expand into other markets within Latin America and the Caribbean, and make adjustments to the 1948 Colón Free Zone Law. Participating in international events as buyers is relevant to creating awareness in new markets or expanding other products in traditional markets. The government will create a new law called Colón Free Port. According to law project 222, which establishes the special system of free port, companies pay no tax for materials, machinery, raw materials, tools, and other inputs required for special operations in the free port system, which are limited to the so-called “16 streets of Colon.” Other components establish that people can buy up to $1,000 per semester. It also states that vacant lots and other properties used for this purpose and their owners must invest, restore, or rebuild in a period not exceeding five years from the effective date of the law.

We have more than 10 Panama Invest events planned for 2016. We are coordinating at this moment INVEST in Barcelona, Madrid, Korea, Japan, and others. In addition, we will participate for the first time with Expo Invest, a new platform to bring investors to Panama, as well as other events in partnership with the Chamber of Commerce. We are expecting a further 100 companies to establish their headquarters in Panama within the next five years.