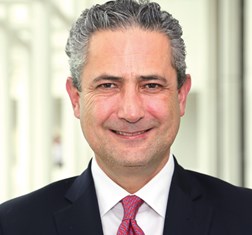 Ernesto Torres Cantú was appointed CEO of Citibanamex in 2014. He joined Banamex in 1989. He previously acted as the President of the consumer banking division, regional director for Coahuila, Chihuahua and Central Mexico successively. He holds a degree in industrial engineering from Tec de Monterrey and an MBA from Georgia State University.

Share on:
TBY talks to Ernesto Torres Cantú, CEO of Citibanamex, on its investments as part of the Energy Reform, ensuring healthy competition in the economy, and protecting itself against cyber attacks.

How is Citibanamex participating in the implementation of reforms such as the Energy Reform and the Telecommunications Reform?

We are convinced that the correct implementation of structural reforms is a key element for the growth and development of Mexico. We have wholeheartedly supported them and have donated or invested in many of the main projects associated with these reforms, such as MXN6.15 billion (USD308.9 million) in Escuelas al Cien, the largest-ever program in Mexico for school infrastructure dignification under the Education Reform, as well as USD98 million for the construction of ALTAN, a wholesale mobile network and the largest telecommunications project in the history of the country, which was part of the Telecommunications Reform. We have been especially active in the Energy Reform, investing MXN1.26 billion (USD62.63 million) in Sierra Oil and Gas, the first independent oil company in Mexico; USD146 million in Enel, the company with the largest installed capacity in Mexico for the generation of renewable energies; and MXN1.24 billion (USD61.64 million) in CFE Capital, the first and only Fibra E (investment vehicle) specialized in the electricity sector. We serve companies that obtained two-thirds of the contracts awarded in the different tenders derived from the opening of the oil sector. We have financed or invested in around 70% of the projects that have been possible due to the Energy Reform.

What is your assessment of the Fintech Bill?

The Fintech Bill is a step forward for the Mexican financial sector, as it provides certainty to market participants. Both the Fintech Bill and its secondary regulation must guarantee a healthy competition that promotes the use of new technologies to achieve greater financial inclusion and, at the same time, protect customers and users. A key aspect of the secondary legislation will be the opening and design of application programming interfaces (API). Citibanamex was the first bank to open its APIs. In this regard, the design of APIs in the secondary legislation should follow global standards and global best practices to ensure the best use of information for the benefit of customers. Citibanamex participates in the Open Banking Working Group organized by The FinTech Hub, C-Minds, and the Open Data Institute (ODI). This working group includes financial institutions and fintech associations. We also participate in the Pilot Project on Open Banking Data Standard of the National Digital Strategy of the Office of the Presidency. The objective of this pilot project is to create an interoperable API to help regulators on the development of secondary legislation of the Fintech Bill related to the standardization of APIs and open financial data.

How is Citibanamex interacting with the fintech ecosystem today?

We are interested in offering the best solutions to our customers, taking advantage of the most advanced technologies. We welcome the new actors that participate in these innovation and collaboration ecosystems. We view fintechs as potential collaborators and partners, rather than competitors. Accordingly, we actively promote interaction and collaboration between fintechs and banks. Transfer is the main fintech in the country, and we were the first bank to open our APIs.
Banks can benefit from the new technologies of fintechs, while fintechs can also benefit from banks’ scale, namely large client bases; in all cases, customers and users will be the final beneficiaries of such collaborations.

What is Citibanamex’s strategy to be resilient against potential cyberattacks?

We adopt and update our policies, methods, and controls to identify, evaluate, prevent, and mitigate cyber risks, as well as promote initiatives to update regulatory and legal frameworks that converge the actions of all parties considering best practices and international agreements. We also collaborate on projects to strengthen the security controls of the different infrastructure components and platforms that support the country’s financial services, while promoting the use of information technology to prevent, identify, react, communicate, categorize, and face present and future threats. Also important is encouraging cyber education and culture among users and the staff of institutions through continuous training.