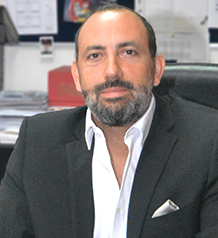 Something For the Ages

Charles Sany Nahhas is the Managing Director of Arabian Marketing Corp FZCO, Montegrappa Middle East Distributor. Charles grew up shadowing his father’s business in the luxury sector, but trained as an engineer and worked in the telecoms industry for 10 years, holding technical and commercial roles specializing in fiber-optic network communications with major equipment vendors such as Alcatel and Cisco Systems, and later as a consultant for smaller start-ups in the industry. In 2004, Charles returned to the family business, where he expanded the Montblanc and Dunhill business in key markets and entered into partnerships and JVs with the Paris Gallery group, with Montegrappa Italia, and developed the business of AMC’s other UK brands in the domestic and travel retail sectors. Today, the business, with its operated JVs, employs over 50 people with a wide regional distribution footprint.

Share on:
How did Montegrappa enter the UAE market? Montegrappa is a traditional Italian pen company founded in 1912. We became involved with Montegrappa after their acquisition by the Richemont Group in […]

How did Montegrappa enter the UAE market?

Montegrappa is a traditional Italian pen company founded in 1912. We became involved with Montegrappa after their acquisition by the Richemont Group in 2000. In 2010, the original Italian family who had previously owned the brand for three generations re-acquired the company and we assisted in the establishment of a regional distribution platform, Montegrappa Middle East, with a dedicated regional sales and marketing team. Today, the Middle East business is outperforming the rest of Montegrappa’s worldwide markets. One of the key elements to this success was the willingness of Montegrappa to work with us on regionally relevant projects. In 2011, for the 40th anniversary of the UAE, we launched a national day pen in the colours of the UAE flag, a collection limited to 1971 pieces, representing the year of unification of the Emirates.
Since then, we have worked with Montegrappa on other regional projects including a collaboration with the Gibran National Committee in Lebanon to create a collection of pens dedicated to the renowned Lebanese artist and author, Khalil Gibran. The launch of this project coincided with Salma Hayek’s visit to the region and the launch of her Hollywood adaptation of Gibran’s most famous work, “The Prophet.“ Most recently, Montegrappa commissioned a book on the history of the Arabic language and calligraphy, and created a matching pen engraved with Arabic calligraphy and Islamic art. Montegrappa supports local cultural initiatives, such as the Montegrappa Prize for Fiction, a writing competition under the Emirates Airline Festival of Literature, which has yielded five published authors in the last three years. Montegrappa is a founding sponsor of the Emirates Opera Project, and in 2013 Montegrappa hosted a concert on the 200th anniversary of the birth of legendary Italian opera composer Giuseppe Verdi, using a full orchestra, conductor, and soloists, all of whom were UAE residents. Such initiatives showcase the cultural depth of the UAE and give the brand the opportunity to engage with people’s real lives and interests.

How would you describe the evolution of consumer’s interest in luxury pens?

At the beginning of the 20th century the fountain pen was a communications tool. It was a bit like the iPhone of today. People wanted the latest features for ease of use and productivity. During the First World War, while most industrial buildings in Northern Italy were forcibly converted into munitions factories, Montegrappa was exempted and continued to manufacture pens as they were important military tools for communications supporting the front line. The most precious possession of a typical World War I soldier was a good pen to be able to write back to their loved ones from the trenches, and many beautiful words of the famous war poets were immortalised through the pen. Things have changed a lot since then, especially in the last two decades with the introduction of new handheld digital technologies. Interestingly, while public perception is that pen sales are declining because of this, in reality the market for high-end luxury writing instruments is growing. The pen today has become more of an item of jewellery than a functional item. It is a perfect gift for someone who is graduating, or moving on to a new job, to symbolise the knowledge they have gained. In addition to making great gifts, people love to buy luxury items for themselves as symbols, not only of a person’s financial and material status, but more importantly of their knowledge, education, and culture

How do you see the industry evolving in the UAE in the next 5 to 10 years?

The luxury pen business can be much bigger than it is today. Watch collectors spend huge sums on luxury timepieces, while pen collectors tend to be more conservative. This is the result of an industry where there is more choice and more expenditure in marketing by the watch brands. Increasingly, we see watch collectors fall in love with beautiful limited edition pens, and we see the parallel between the two industries, especially in this region. This indicates a huge potential as the market for luxury watches is currently much larger than that of luxury pens. The traditional GCC dress style does not give a lot of options for individuality. You can have a watch and cufflinks, but the local dress does not include suits, belts, or ties, so a fine writing instrument in the pocket can be quite an important element of a gentleman’s look and is often worn as a fashion accessory.