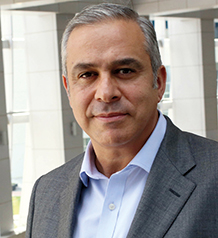 Salim Bitar holds a master’s degree in international business from Florida Atlantic University and a bachelor’s degree in international finance from the University of South Florida. He spent 21 years in the telecoms sector working for Motorola, where he held senior finance and operational roles in the US, Asia, the Middle East, and Africa. In 2008, he joined Dubai Holding, where he took on chief executive roles leading the F&B business and later the restructuring and delivery of a $2 billion residential project in Dubai. He joined Aujan Group Holding in 2011 and is currently CEO of its hospitality and real estate arm.

Share on:
TBY talks to Salim Bitar, Hospitality and Real Estate CEO of Aujan Group Holding, on the evolution of the real estate business and the range of its developments.

What developments does Aujan Group Holding own in Mozambique?

Our development history spans island resorts, city hotels, serviced residences, and commercial real estate complementing the hospitality products. We developed and launched the first phase of the Pemba Beach Hotel and Spa in 2002. Today, with its mix of African and Arabian architecture, it operates as the Avani Pemba Beach Hotel and Spa. We subsequently developed a secluded resort on the private island of Medjumbe, and a family resort on the island of Matemo, both in the Quirimbas archipelago. We also developed another island property, the boutique Anantara Bazaruto Island resort. In 2012, in line with the vision for the country, we diversified our portfolio to focus on business tourism and partnered with recognized international partners who would bring a new dimension to hospitality in Mozambique. With the world’s eyes set on Maputo, we wanted to develop something very distinct from anything else in the city or country. This is how the concept of our latest and largest development, Torres Rani, was born.

What sets the Torres Rani apart from other options in the city?

There were two areas we wanted to focus on, namely creating something memorable and different in Maputo and meeting the expected demand of local and foreign companies coming to operate here in the future. Maputo is a growing metropolis and our choice of location, architecture, features, and operators focuses on providing the convenience of major cities around the world while highlighting the beauty of the city and country around us. This large development includes a hotel, an office tower, a retail area, an apartment tower, and the Radisson Blu Residences. We wanted to provide an environment where people can live, work, and spend leisure time with reliable round-the-clock utilities and a natural sense of security—an environment conducive for doing business, raising a family, and entertaining. With all its unique features, we plan to market the development at very competitive prices, opening the doors to a host of companies and residents whose aim is to contribute and participate in the growth of Mozambique.

How would you describe the evolution of the real estate market in Mozambique?

Whenever there is a slowdown in the economy, people get concerned. We have been in the country for two decades and will be here for many more to come. The prospects of the economy of Mozambique continue to be very promising, despite the global economic adjustment under way. Research from international entities and large financial institutions point to an economy that will be significantly propelled by hydrocarbon exploration and production in the future. That, and other developing industries, will all contribute to real estate market growth in the country.

Will Aujan Group Holding invest in further projects in luxury tourism in the region?

We are heading in an environmentally responsible direction. For us, luxury is not just having a beautiful resort and a well appointed room; it is about preserving the environment. In February, we re-launched the Anantara Medjumbe Island Resort and Spa, where we move from 100% reliance on diesel for power to 100% solar. This will be the first private island in Africa to be fully reliant on solar power generation. For us, that is responsible luxury.

Is there a lot of interest in Mozambique from the GCC?

I have been privileged to participate in a few investor conferences, particularly in Dubai, which were focused on Mozambique. I was pleasantly surprised to discover the level of trade and growth in trade between Mozambique and the UAE. Dubai Ports operates here, and we see a large influx of companies coming through the GCC participating in different industries. Qatar Airways has been flying here for a while, and there are discussions about the possibility of Emirates flying this route too. Moving forward, we want to focus on expanding Mozambique tourism by tapping into these source markets as well.