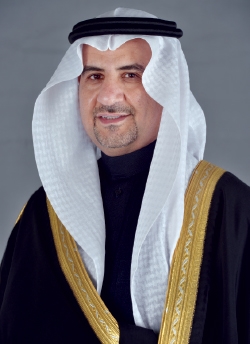 Khalid Al Mudaifer has been in his current position at Ma’aden since 2011, and has led the company through the most significant phase of growth in its history. He also spent five years as Ma’aden Vice-President for Phosphate and Business Development, where he lead the development of Ma’aden’s first megaproject, the Ma’aden Phosphate Company. Prior to joining Ma’aden, he was Vice-President and Director of Finance at the Sharq Eastern Petrochemical Company and General Manager of the Qassim Cement Company. He holds an MBA and a Bachelor’s degree in Civil Engineering.

Share on:
What stage is the mineral sector at now, considering Saudi Arabia is the most mineral-rich country in the region? Mining goes back to 1935 in Saudi Arabia, although it had […]

What stage is the mineral sector at now, considering Saudi Arabia is the most mineral-rich country in the region?

Mining goes back to 1935 in Saudi Arabia, although it had a very low profile until as late as 2007. It was mainly focused on gold, with a total investment of around $400 million and no more than 1,000 direct jobs. After 2007, things changed; the government decided to build up the mining industry to diversify the economy, create more jobs, and develop remote areas. New infrastructure was built to complement this desire for expansion, resulting in the construction of industrial railways and a mining city with a deep port at Ras Al Khair. Ma’aden has attracted leading global mining companies to partner with us and we now have a real mining industry in which we have invested around $17 billion since 2007, but we plan on investing up to $35 billion over the next 20 years. We have four major projects we are working on right now. One is a $1 billion project that involves the development of four medium-sized gold mines using treated wastewater from Turaif. The second is the Ma’aden Phosphate Company with investments worth over $5.5 billion. The third is a fully integrated aluminum project with Alcoa worth about $10.8 billion and the fourth is the $7.5 billion Waad Al Shammal phosphate project, which involves the development of a new mining industrial city in the remote north of the Kingdom. Underneath all of these efforts, Ma’aden’s mission is to build mining as the third pillar of Saudi industry, beyond oil and petrochemicals. To do this we are encouraging the growth of mining skills and the mining service and supply sector, but we’re also developing the capacity of Ma’aden itself in order to achieve our vision of becoming a world-class minerals enterprise.

How does the development of infrastructure help the mining industry?

It is only with focused investment in infrastructure that the Saudi mining industry has been able to boom since 2007. The Kingdom’s mining sector is being supported by mega domestic infrastructure that includes a 1,500 kilometer railway, which now makes the exploration and production of phosphate and bauxite deposits in the north of the Kingdom viable. We are now able to move volumes of minerals from northern Saudi Arabia to Ras Al Khair, which is home to our integrated aluminum plant and the Ma’aden Phosphate Company-integrated fertilizer facility. It also hosts a deep-water port, another example of must-have infrastructure to sustain mining industry growth and prosperity in the Kingdom.

Do you plan to invest in continued exploration in Saudi Arabia?

Exploration is the basis of any mining company. We are the main explorers in Saudi Arabia, which is largely underexplored compared to other countries where mining is an active sector. We have an aggressive exploration scheme, and an exploration division with over 100 geologists. We have brought a number of international drillers and explorers to help us as well. Ma’aden has over 50,000 square kilometers of land licenses, which is impressive even by international standards. Our exploration team carries out not only regional greenfield exploration programs, but also near-mine brownfield exploration and resource evaluation for several commodities in phosphate, metallurgical bauxite, gold, copper, and magnesite.

What role do joint ventures play in your strategy for growth?

The fastest way to learn is through joint ventures. It is a proven model to build Saudi Arabia’s mining capabilities, and has also been a proven model in the oil industry. Joint ventures have helped Ma’aden achieve the level of capability it has today. In our first project, the challenge was marketing. We looked to work with the best in the world, and SABIC has an excellent marketing scheme so it was our first partner. For our second partnership, the challenge was technology and know-how in manufacturing in the aluminum business, so Alcoa was our partner there. The third significant partnership was for the Waad Al Shammal project, which required experience in phosphate ore and phosphate processing, as well as marketing so we brought two partners into this. One was Mosaic, the largest phosphate producer in the world and based in the US. But we also brought in SABIC again to support us with its global marketing network.