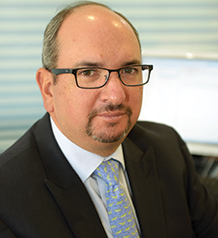 Juan Miguel Cayo is a Peruvian economist with a master’s degree from Georgetown University. He has extensive experience in the public sector, including work with the Central Bank, Ministry of Finance, and Ministry of Energy. He served as Vice Minister of Energy under Alejandro Toledo’s administration, followed by a position as Vice Minister of Economy during Alan Garcí­a’s term. He worked for four years in Washington D.C., one year of which was spent at the Inter-American Development Bank and three years at the World Bank as an energy specialist for Latin America. He then returned to Peru and spent four years at Enel Group, after which he joined Fenix Power Peru.

Share on:
TBY talks to Juan Miguel Cayo, General Manager of Fenix Power Peru, on the state of Peru's energy sector, the company's recent acquisition by Colbún, and ambitions for the future of the company.

What are the latest trends characterizing the energy sector in Peru?

The energy sector here is in the middle of a cycle marked by an over-capacity problem. The reserve margin in 2016-2017 will exceed the 70% level, which is huge; therefore, we are observing a phase of low prices, and there is a struggle in the market to obtain contracts with regulated and unregulated clients. We expect this phase of the cycle will last for three or four more years. Then, when demand rises again and the reserve margin falls, prices will probably come back to more normal levels. What we are suffering now is essentially the result of government intervention over the last five or six years where the government promoted a great deal of additional capacity; however, this additional capacity was not supported by stronger demand. It was assumed that it would continue growing at 10% per year forever. What actually happened was a slowdown in demand and all of the additional capacity entering the market deepened the overcapacity problem. There are also many distortions in the market in terms of prices and subsidies, again mostly due to government intervention. The new administration will have to do a great deal of work to dismantle the distortions and recover the spirit of the 1992 and 2006 reforms. This means deregulating and promoting open and fair competition in the market with no distortions, no subsidies, and no special treatment of some technologies or for particular agents.

How can Fenix Power Peru position itself as a provider of international standards and how will the company’s acquisition by Colbún from Chile improve the operation?

That is a key element in our mission. Colbún is a company with more than 30 years’ experience in the Chilean market. Even though it is not the largest company in the power sector, (being third in terms of size), it is one of the most respected companies in Chile. Fenix Power is Colbún’s first venture outside the Chilean market and is important for the Peruvian market. Colbún has come to stay for the long term and to grow. In this phase, it is obviously not logical to build greenfield projects in Peru; hence, using M&As is more reasonable. Therefore, we are in the process of trying to buy more plants, both thermal and hydro. We want to obtain a balance between hydro and thermal in order to better pool our risks. Buying hydro is essentially a matter of balancing of risks, while buying more thermal assets is an issue of achieving economies of scale and synergies that reduce our costs and increase overall efficiency. This is an industry where economies of scale are important. To have Colbún as our parent company is important in terms of becoming an established, recognized, and respected player in the Peruvian market.

What is the most ambitious change that you want to see as GM of Fenix Power Peru?

The former owners of Fenix Power Peru decided that they wanted to sell the company over a year ago, and, of course, the attitude towards the market is totally different if there is an intent to sell. They were not aggressive and were not seeking out new contracts. When Colbún bought the company, it found there was a significant amount of energy that needed to be contracted in an aggressive market. We therefore try to shift the company’s policies to become more aggressive in the market in order to sell our energy in the short, medium, and long term to non-regulated clients and regulated as well. We are participating in several bidding processes, which contrasts with the fact that the company was absent over the last year. We need to increase our portfolio of PPAs, which goes hand in hand with growing by acquiring new assets to take advantage of economies of scale and becoming a larger player.