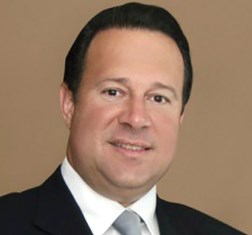 Juan Carlos Varela graduated from Georgia Tech University with a degree in industrial engineering. He was elected Vice President of the Republic of Panama in July 2009. On March 17, 2013, Varela became the presidential candidate for the Panameñista Party, and on August 25 of the same year was proclaimed candidate for the Alliance of the People First (Alianza El Pueblo Primero), made up of the Panameñista and Popular Party, with the support of independent sectors of the country. On May 4, 2014, Varela was elected President of the Republic of Panama for the 2014-2019 Constitutional period.

Share on:
How have relations between the UAE and Panama evolved since you took office in 2014? As soon as I won the election I decided to establish an embassy here in […]

How have relations between the UAE and Panama evolved since you took office in 2014?

As soon as I won the election I decided to establish an embassy here in order to expand our diplomatic footprint. Since then, we have sent an ambassador and exchanged a number of missions. The Dubai Chamber of Commerce came to Panama and wants to open an office there. Additionally, we plan on bringing a business delegation here and have confirmed that Panama will participate in Expo 2020. We are signing different agreements aimed at protecting investment and supporting tourism between our countries. Going forward, the main challenge is ensuring that we add value to all of the cargo that comes through the Canal. This would not only ensure Panama’s position as a shipping and logistics hub, but would also allow firms and countries to maximize their industrial and economic potential.

What are the strategic priorities and areas of cooperation between Panama and the UAE moving forward?

Trade is a vital component of relations between Panama and the UAE and can be further leveraged to support both nations. If we are able to establish a direct flight, then trade could expand a great deal. Panama and the UAE both represent international success stories: both are global hubs with air connectivity and financial centers that play an important role. Each place is also a gateway to their respective regions: the UAE for the Middle East, India, and Africa, and Panama for Central and Latin America, with the Canal the most modern and visible symbol of our ability to connect the world and bring people together. Moreover, our airport serves 15 million passengers and has 15,000 employees, which we seek to grow to 30-45,000 in the coming years. In terms of investment, we invite the UAE’s investment fund to bring capital into Panama, vitalizing sectors such as energy, infrastructure, and real estate.

What are the biggest lessons Panama can learn from the UAE?

The UAE is a country that promotes peace, dialog, tolerance, and investment protection and, as such, has a great future ahead. A key area we can learn from is immigration. Changing regulations to drive immigration would be a vital, including visa requirements so that we can support expanded tourism. In Panama, we changed from restricted visas to stamp visas, and I hope that one day we can open the country entirely, doing away with visas. This is, of course, a process that takes time. From a business point of view, an immigration reform would facilitate a smooth transition for international SMEs looking to enter the country and bring their expertise. By having nationals from more than 150 countries working together in the UAE, it sends a strong message to countries that are currently closing their borders and restricting access. You cannot define people by their country of origin, and the UAE is doing an excellent job illustrating this.

What would be your message for UAE investors interested in Panama?

Panama’s FDI has grown by more than USD4.5 billion every year in recent years, coming from Asia, the US, Europe, and the Middle East. Thanks to our robust regulatory system, investing in our country is secure, profitable, and safe. In this sense, we have directed more than USD500 million in the fight against corruption. Panama’s USD65 billion GDP has been growing steadily for the past 10 years, averaging 6-7% growth per year. Unemployment is less than 5%, and inflation is less than 1%. Like the UAE, we have benefited from the growing presence of international companies that are using our geographic position. As proof of our extremely business friendly environment, 150 international companies from all industries and service specialties have moved their headquarters to Panama. Work permits can be granted with nearly same-day service, and the government is constantly trying to ensure the highest technological standards are introduced and implemented.