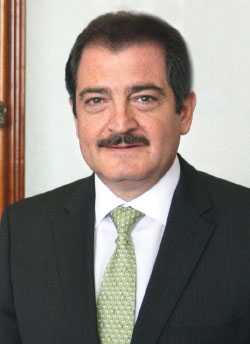 Jorge A. Juraidini Rumilla studied Industrial Engineering and Systems at the Instituto Tecnológico y de Estudios Superiores de Monterrey (ITESM), and later took specialization courses on political analysis, lobbying, and parliamentary practices at the Universidad Iberoamericana. He also completed Management Direction at IPADE Institute and various other courses in marketing policy at George Washington University and the Political Center in Miami, Florida. He has held public and private sector positions, including a 12-year period as Director of Government Relations for Grupo FEMSA, and as Director of Inter-parliamentary Relations of the Senate, Legislative liaison for the Secretary of Economy (SECOFI), and Deputy Negotiator for the Mexican Commission of NAFTA from 1992 to 1996, among others.

Share on:
What were the main highlights of the World Satellite Business Week in Paris? The summit provided the opportunity for satellite operators and industry participants from around the world to meet […]

What were the main highlights of the World Satellite Business Week in Paris?

The summit provided the opportunity for satellite operators and industry participants from around the world to meet and discuss launching and satellite services. For Mexico, it was excellent because Telecomunicaciones de México (TELECOMM-TELÉGRAFOS) has been participating in the sector through MexSat, which is the system operator of three satellites. We already have one satellite in orbit today; will have two more in 2014, and finally a fourth in 2015. Meetings like these provide a medium of interaction with a wide range of businesses that improve both our knowledge of the technology out there, and also our commercial relations. What we plan to do, in light of the agreement signed with other telecom operators, is to promote Mexico in this area. To do this, we intend to stage a summit in here as of 2014 to give a Mexican perspective. TELECOMM-TELÉGRAFOS is active in the sector and operates MEXSAT.

The Secretary for Communication recently launched two satellites and said that two more would be launched in 2014, what is the significance of these services for the telecommunications industry?

MexSat contains three satellites so far, and is a Mexican system operated by Telecomm. Currently, we have the Bicentenario satellite in orbit which works in the C and KU extended band, and 2014 will see the launch of the second satellite, the Centenario, which will operate on the L band, to be followed by a third, Morelos 3, which also operates on the L Band. These systems will enable us to provide services for social programs and also for security for those entities that require them. This will also provide us with a guaranteed system capable of meeting the demands of the Mexican government in the provision of public services.

Will reforms in the telecoms sector attract foreign investment?

Fiber optics is currently licensed to the Federal Commission of Electricity (CFE) as is moving into the telecoms arena. This means that it will become the fiber optic operator, and according to the new projects planned for 2014, we are poised to work with the private sector in developing a more robust fiber-optic network of 700 megahertz bandwidth. The network will be shared by private sector companies and the public sector alike as part of the development plan we have undertaken. From a Telecoms and telecommunications perspective, this marks a huge change, yet it is also a good opportunity for the private sector to participate in order to bring services as a carrier-to-carrier service. According to what the private sector wants, I think we can find ways of jointly working in order to gain a better position in the industry for the people of Mexico and companies hoping to invest here. The major changes are already in place, under the necessary constitutional amendments, allowing any company interested in participating in the Mexican market to join. I think we have an open market, as well as the opportunity to be able to have 100% of foreign investment in the satellite sector. One of the main questions that we heard being asked during the World Satellite Business Week concerned foreign company participation in the sector according to the new legal framework. And the answer was exactly the same; the satellite sector is 100% open to foreign investment, and the broadcasting sector to foreign ownership.

Are these reforms going to increase the contribution of the sector to GDP?

Yes, and this will develop an economic base. Therefore, it is not only a major change, but also a positive one. These reforms take time to mature. Overall, we have the expectation that it will make a positive contribution to the economy, and materialize in the short term.