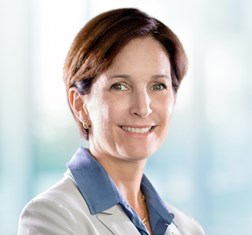 Dyala Jiménez Figueres was sworn in as Minister of Foreign Trade of Costa Rica on July 2, 2018. She is responsible for Costa Rica’s foreign trade policies and attraction of foreign investment, as well as its representation before multilateral organizations. She has over 20 years of professional experience as a lawyer and is internationally recognized as an expert in international arbitration. Prior to her current position, she worked in several law firms in Costa Rica, Chile, and France, as well as in the International Chamber of Commerce and also held several public service positions, such as Executive Director and Advisor to the First Vice-Presidency, Advisor to the Minister of Treasury, and Parliamentary Advisor. She graduated from the University of Costa Rica and has a master’s from Georgetown University.

Share on:
Decades of certainty and stability has strengthened Costa Rica's reputation as an attractive country for foreign investment, allowing the country to realistically aim at becoming an OECD member by 2020.

What lies behind the economic success of Costa Rica?

Costa Rica boasts certain key advantages that make it an attractive country for FDI. First, political stability is the main characteristic of Costa Rica, and since it has not had a standing army for 70 years, such stability is pretty much guaranteed. Our forefathers’ legacy of democratic principles carries on, and it is something that modern governments are particularly sensitive to. Second, Costa Rica has a strong social net, with a social security system that is universal and free and has had obligatory education for girls and boys almost since the country’s independence. These characteristics mean that our major investment is in human talent, which make us attractive for investment in services and knowledge-based enterprises. A third factor is our strategic location, as we have access to two oceans and are in between North and South America. In addition, we are in the same time zone as the US, which helps companies to program investments with great efficiency. In addition, we have a stable legal regime and a reputed judiciary, which affords legal certainty. Finally, we have entered into 15 FTAs, including deals with the US, Canada, Europe, China, and South Korea. This is vital in companies’ planification of their operations worldwide.

What steps is the government taking to expedite private initiatives that seek to boost the Costa Rican economy?

President Alvarado’s Administration is results-driven, and fully aware that economic development is not a matter of individual action, but of collaborative multi-stakeholder engagement and partnership. Working hand-in-hand with public and private sector groups, the government is advancing an aggressive agenda to boost the economy. One of the key items of the agenda is the Alliance for Bilingualism, a program launched to scale the mastery of English as a second language. The second point is the work undertaken to tackle the challenge of skilling for tomorrow’s workplace, which stems from our historic tradition of embedding education as a core value for our inclusive, sustainable development. The third relevant agenda, under the purview of our Ministry of Science and Technology, relates to connectivity. We realize that operations in a technologically-driven world demand robust, efficient, agile, and secure networks, and we are investing heavily to ensure that they are readily available. The fourth agenda relates to administrative simplification and the implementation of a single window for investment. We need to ensure that regulations, laws, and other instruments are aiding rather than hindering the achievement of the government’s objectives. The fifth aim of the agenda is to direct significant public resources to improve road infrastructure network. With an investment of close to USD5 billion until 2022, we will focus on major bottlenecks within the metropolitan area and key strategic arteries connecting our coasts and borders. The sixth point is more sector related. For example, the ministries of Foreign Trade and Agriculture, with support from the Costa Rican Export Promotion Agency, are working on a program to “discover” competitive advantages in the agricultural sector. Last but not least, under Costa Rica’s accession process to the OECD, further structural reform is taking place in key strategic areas such as public governance, innovation, competition policy, and investment policy.

Costa Rica is advancing its negotiations to join the OECD. When might it become a partner?

President Alvarado has committed to making Costa Rica a member of the OECD by 2020. We have eight bills already in Congress, and three or four more to come. An important internal step we took, the creation of a special congressional committee handling only OECD-accession-related legislation, is allowing us to move forward on this vital agenda. Our ambitious calendar targets to conclude discussions in seven of the pending 10 committees this year, leaving three for 2020.

In 2022, what would you like to have achieved during your time in this ministry?

First, I want Costa Rica to become a member of the OECD. Second, understanding that services and technology are changing rapidly, I want to leave an appropriate framework of incentives. Third, I want the national council for trade facilitation to be fully consolidated. Fourth, we need to be part of the WTO’s transformation. To this end, Costa Rica is prepared to engage with all members to address all pending issues.