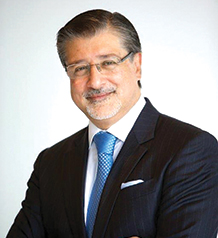 Adnan Z. Amin, of Kenya, has over 25 years of experience in multilateral diplomacy and direct engagement in promoting the global development and socio-economic agenda, including sustainable development. Prior to joining IRENA, he served as Head of the UN System Chief Executives Board for Coordination (CEB) Secretariat. In this function, he was responsible for supporting the CEB in its UN system-wide policy coordination, under the Chairmanship of the UN Secretary General. He also served as the Executive Director of the Secretariat of the Secretary-General’s High Level Panel on UN System-wide Coherence, co-chaired by the prime ministers of Mozambique, Norway, and Pakistan. He is a member of global initiatives and entities such as REN21 and the UN Secretary General’s Sustainable Energy for All.

Share on:
TBY talks to Adnan Z. Amin, Director-General of the International Renewable Energy Agency (IRENA), on the falling costs of renewable energies and how Abu Dhabi could be used as model for other cities and regions.

What shifts have you seen in the cost of renewables?

Over the last five years, the cost of solar PV modules has fallen by 75%, which has dramatically changed the business case for solar. The cost of wind turbines has fallen by around 30%. The trends are downward, and as innovation continues, we will see reduced costs. The costs of geothermal and hydro are already some of the lowest costs on the grid.

What role do private companies and investors play in making the transition toward renewables?

Private investment is the greatest driver for cost reduction. There is not enough public finance to reach the level and ambition that we need; thus, the role of the private sector is central to whatever will happen to renewable energy in the future. When the cost of technology starts to fall, that is when you reap the benefits of what is possible with renewable energy. The role of the private sector in developing models for market transformation is critical. The private sector possesses the knowledge, the technology, and the investment experience to make it happen. The key players we need to work with are investors because, so far, the perception of risk related to renewable energy is unrealistically high compared to its performance; therefore, we have to find ways to de-risk finance and investment.

Focusing on the UAE specifically, how do you assess the renewable energy market here and the policies in place to enable sustainable technologies to flourish?

In the UAE, Abu Dhabi created a 7% renewable energy target by 2020. To set an early target like that was an important step to indicate the seriousness with which they took this. I believe it is had a huge impact throughout the region because many other countries are now establishing their own plans. In Abu Dhabi, we have seen some of the initial investments of distributed solar projects around Masdar and the Shams 1 concentrated solar plant, one of the largest in the world at 100 MW. These indicate that the UAE is serious about moving ahead to meet the target; still, time is limited. What is required now is a clear policy framework through which investment in renewables will be incentivized and a clear roadmap highlighting which technologies and models are going to be used for reaching that target. It is a short time frame, but I think knowing the record of achievement in Abu Dhabi, it is possible to reach this target.

In what ways is the city of Abu Dhabi a model for other cities in the region and around the world in its efforts toward reducing its carbon footprint?

Abu Dhabi was the first to launch one of the most efficient and ambitious projects for sustainability. That first investment led to huge dynamism in the region and has been an example to others, such as Saudi Arabia. The creation of Masdar City as a low carbon city in the desert, a very harsh environment, demonstrates some of the critical renewable technologies’ integration into cities and the way you can actually build cities of the future with a much lower carbon footprint. The investments that they are undertaking, nationally and internationally, in renewables send a strong message.