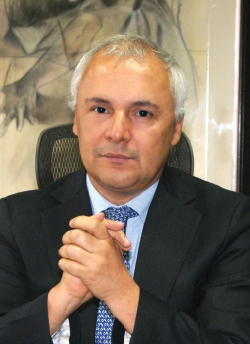 Álvaro Miguel Navas Patrón has a long history in academia and the public and private sectors. He has completed studies in international public law, constitutional law, and various specialized programs in France and Colombia. From 1994 to 2008 he served as lecturer at the Universidad Externado de Colombia, as Academic Coordinator at the Instituto de Altos Estudios Para El Desarrollo-IAED, and full-time lecturer on topics such as human rights, economic integration, and the EU at the Universidad de los Andes in the mid-1990s. He has worked as an assessor for the Presidential Office for Human Rights, as well as numerous governmental bodies involved in improving Colombian society. His writings on relations between municipalities and the state have been widely published, and he is bilingual in Spanish and French.

In May 2013, the 12 Colombian banks reported a profit of Ps2.49 trillion, while in the same period of 2012 that figure was Ps2.17 trillion. What lies behind Colombia’s banking strength nowadays?

The Colombian banking system has a highly efficient regulatory framework that has allowed the optimization of the bank’s role in society. Colombia suffered from a severe financial crisis in the late 1990s, which led to reforms in the regulatory organ of the financial system, bailing out many banks and establishing more efficient regulation. The country also improved the monitoring and supervision of financial institutions operating in the country and the market itself. Today, we have a very robust financial system in terms of the supervision and monitoring of banking activity. Additionally, the Colombian economy has been steadily growing for the past 12 years, and keeping in mind that Colombia has a robust domestic market, the country is in a good position to overcome possible adverse economic situations. Besides, confidence in the country has increased significantly, and this has boosted both domestic and foreign investment. Therefore, the current situation of the banking system in Colombia is due to the efficiency and the favorable economic conditions the country enjoys.

What strategies has the banking sector implemented to boost banking penetration in remote areas of Colombia?

The country has over 70% of its population concentrated around urban areas, and 52% of these people live in either large or medium to large cities. Therefore, banking services and activities focus on these areas, where people tend to have regular and stable income, as well as proven credit quality. In this context, rural Colombia has some of the worst social development indicators, such as increased poverty and low banking penetration. Banking intermediation costs are high and reaching these areas is, in many cases, not profitable at all for banks. However, there have been some policies to reduce these costs from the government. As per Banco Agrario de Colombia, we have 742 bank branches and 6,400 banking correspondents. We are a banking institution with a presence in areas where no other banks can be found, such as rural Colombia. We have 500 branches located in towns where there are no other banks.

What other strategies do you have lined up to raise banking penetration in Colombia?

We have an ambitious plan to open 1 million Banagraritos accounts, in which we will bring banking services closer to children, whilst teaching them the benefits of having a financial history in the future. We would like to boost the savings culture among children in rural areas, as they are the future of the country. We also want to develop a program for teenagers aged 18 and over providing access to financial services, and creating special conditions for them to access to their first credit. Banco Agrario will play a major role in the post-conflict period in Colombia. The bank has a presence in 720 municipalities, and in over 500 of which we are the only financial institution operating.

How has the bank contributed to the government’s plan to address the national housing shortage?

Estimates show that there is a shortage of 1.9 million housing units in urban areas of the country, whereas in rural Colombia, this figure climbs up to 2.3 million. The government has implemented policies and plans at both the urban and rural level. Our institution, using funds provided by the Ministry of Agriculture, manages the plan at the rural level. These funds are made available to municipalities, which extend them to the lower ends of society in rural communities. The Universidad Nacional de Colombia plays the role of external agent to analyze the applications made by municipalities. From there, it continues under a particular framework to make these funds fully available. To date, we have provided housing units in around 599 municipalities, 66,875 have been contracted, and 42,072 have already been handed over. In this context, we are contemplating the possibility of granting productive loans to those families that have been awarded these houses, because they usually have enough land to operate productive agricultural activities or other related business activities.